An off-the-wall solution to climate change

Desertification in the Sahel region of Africa is advancing quickly. A novel solution that involves planting thousands of trees may help protect the area’s environment and the livelihoods of locals 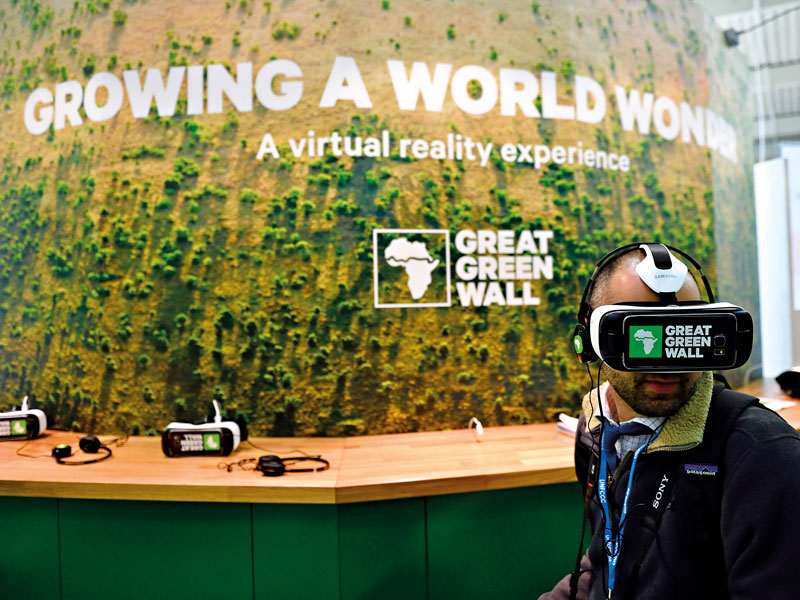 Climate change is a huge problem, and it will require an equally large solution – multiple solutions, in fact. In Africa, one such idea involves planting a wall of trees, 8,000km long and 15km wide, which, once complete, will be the largest living structure on the planet – three times the size of the Great Barrier Reef. Africa’s Great Green Wall (GGW) was launched in 2007 by the African Union, with the first trees planted in Senegal the following year. The wall will stretch across the entire width of the continent, traversing more than 20 countries at a cost of $8bn.

The financial outlay of the GGW is likely to be worth the effort. For the last 100 years, the Sahara Desert has been expanding by more than 7,600sq km every year, making it around 10 percent larger today than it was in 1920. Climate change and the increased risk of drought that it brings seems to be exacerbating the situation. It is hoped that the GGW can arrest the Sahara’s advance, but it should do more than simply act as a barrier to desertification. By 2030, it should sequester 250 million tonnes of carbon from the atmosphere, restore 100 million hectares of degraded land and create 10 million jobs in rural Africa.

Achieving these ambitious goals will require a huge international undertaking. Communities will need to cooperate to plant the necessary vegetation, which must be protected against animals, bush fires and human deforestation. Technological input will be necessary to ensure that such a large area of land is able to support tree growth without having any irrigation in place. Lastly, a huge amount of financial support will be required from governments and supranational organisations alike.

A grain of hope

More than a decade since the first sapling went in the ground, the GGW is about 15 percent complete. Since 2007, the project has shifted somewhat in terms of its methodology, encompassing regreening techniques that were already being employed on a small scale by indigenous farmers, rather than the overly simplistic idea of planting a huge line of trees on the edge of the Sahara. Even with much work still to be done, the GGW has achieved some impressive results.

Key examples of progress include the restoration of 15 million hectares of land in Ethiopia, along with improvements to land tenure security. In Senegal, 11.4 million trees have been planted and 25,000 hectares of land restored, while in Niger the restoration of land has led to the production of 500,000 tonnes of grain every year, enough to feed 2.5 million people. Other African states have experienced similar benefits.

“The GGW of the Sahara is also on the front line in the battle against climate change,” Tim Christophersen, an ecosystems expert for the UN Environment Programme (UNEP), told World Finance. “It is contributing to the fight by boosting local community access to renewable energy for basic household needs, as well as communal and production needs, and aiding citizen mobilisation through a GGW public awareness campaign that promotes a rousing call to ‘grow a new world wonder’.”

As well as its local impacts, this flagship initiative promises global benefits. By serving as a carbon sink, the GGW will help with the international fight against rising temperatures. Meanwhile, by bringing stability to the Sahara region, it may help prevent socio-political upheaval from overflowing into neighbouring regions. This is part of the reason why the project has received support from a host of international donors. In addition to pan-African organisations, the World Bank, EU and UN are all partners. Governments from Ireland and Turkey, among others, have also pledged financial support.

“The UN Food and Agriculture Organisation [FAO] supports the initiative through its Action Against Desertification (AAD) programme,” said Moctar Sacande, International Project Coordinator at the FAO. “The AAD is working on the ground on large-scale agro-sylvo-pastoral land restoration with farmers and village communities, planting trees and useful species to increase vegetation cover and reverse land degradation. Of course, there are many, many other strategies often used locally, but this is very efficient in reversing the negative trends and improving landscape productivity.”

But with much of the wall still to be built, more support will be required. Desertification is a serious issue – one that does not only affect the Sahara and its surroundings. The successes of the GGW are to be welcomed, but they must be built upon.

Money grows on trees
Although much of the GGW’s focus is on the natural world, the project has economic aims too. Thus far, many of the jobs created for rural communities have been temporary or seasonal roles associated with restoration actions, such as village technicians, seed collectors or nursery workers. However, the direct economic benefits of land restoration have started trickling down to the wider community.

“An example to illustrate the impact that the GGW has had on employment in the region concerns the herbaceous fodder species planted in Burkina Faso and Niger, which produced an average of 1,200kg of biomass per hectare just one year after planting,” Sacande told World Finance. “This generated an income of $40 per hectare, equivalent to half the monthly minimum wage in the country. Hence, the 15,000 hectares under restoration thus far in Burkina Faso could potentially yield up to $600,000 per year to local farmers.”

Far more than just a line of trees, the GGW supports horticultural skills and income for local people. In Senegal, gardens that form part of the wall can provide work for hundreds of labourers who sell their proceeds to grant themselves some financial security. In this way, donations to the GGW are not handouts: they point the way towards self-sufficiency.

“What’s more, it is estimated that land restoration with indigenous trees will sequester 7.15 tonnes of CO2 equivalent per hectare per year in the Sahel,” Sacande said. “This will soon provide some carbon bonds for those communities.” Carbon or green bonds are rapidly growing in popularity (see Fig 1), so much so that last year, Moody’s had to revise its prediction for the market up from $200bn to $250bn. Such a trend bodes well for the GGW and those who have begun to rely on it for their livelihood. A united front
As well as being a huge financial undertaking, the GGW is a substantial logistical one. More than 20 countries are involved in the project, and they must all coordinate their actions if the wall is to fulfil its ambitious targets. Countries in the Sahel are used to working in isolation to tackle the problem of land degradation, desertification and food insecurity. This is partly why heads of states within the African Union decided to create the GGW initiative: to deliver a pan-African solution to a pan-African problem. The roots of international collaboration may not run as deep across the continent as they do elsewhere (although recent efforts to create the African Continental Free Trade Area show this is improving), but they will prove essential in tackling the Sahara’s advance.

“The GGW is bringing African countries together, creating unity through a harmonised strategy and a common vision, [and] making sure there is cooperation among activities whether they are in Senegal, Niger or Burkina Faso,” Christophersen said. “Representatives from governments (national, sub-national, local), civil society and donor agencies are part of the GGW’s steering committee, which meets on an annual basis to discuss progress in implementation and evaluates the achievements on the ground.”

The GGW is, therefore, not just an environmental and economic asset, but also a political one. Already, it has garnered the support of a host of pan-African organisations, including the Southern African Development Community. The initiative’s ability to foster unity across the Sahel should not be underestimated.

“Concrete examples of transboundary solidarity exist across the Sahel, with communities exchanging seed species, local knowledge and [carrying out] exchange field visits to learn from each other,” Sacande said. “National forest seed institutions complement each other when seed shortages occur – between Burkina Faso, Mali and Niger, Mali and Senegal, or Niger and Nigeria.”

Desertification cares not for national borders. As such, the GGW employs an integrated landscape approach that works with residents to help them thwart soil degradation. It’s an approach that should deliver local and global benefits in the years to come. The sands of time
But despite its impact, the GGW has not been an unmitigated success. Scientists are not united on the exact cause of increasing desertification in the Sahel, and so remain divided on the best ways of putting a stop to it. Some have argued that tree planting is inefficient, with a previous effort in Nigeria resulting in 80 percent of saplings dying within two months of being planted.

Sacande says that such challenges are understandable given the scale and complexity of the initiative. “To improve the success rate, the FAO’s AAD took five years to come up with a science-based approach that combined plant knowledge and social involvement,” he said. “This has allowed for the planting of more resilient species, involving mechanised land preparation to capture maximum rainfall – which expands soil moisture to levels necessary for seedling survival and growth for at least two months after rains stop. This road-tested approach can now be scaled up.”

Despite the setbacks, those involved with the GGW remain optimistic that it can achieve its aims by 2030. As the famines and other humanitarian crises exacerbated by land degradation continue to blight the Sahel, the impetus behind the GGW will grow. Hopefully, in the years to come, the GGW will continue to deliver improvements in terms of land restoration, sustainable agricultural practices, the provision of clean energy, and the development of small and medium-sized rural enterprises.

“The UN Decade on Ecosystem Restoration 2021-30, implemented by UNEP and the FAO, is set to consider the [GGW] as a global priority area for restoration,” Christophersen explained. “UNEP is aiming to strengthen and focus its role in supporting the Sahel region and specifically the [GGW] of the Sahara and the Sahel, in collaboration with governments, other UN agencies and donors such as the Global Environment Facility and the Green Climate Fund.”

In China, too, there are efforts to build a green wall to prevent the advance of the Gobi Desert. According to the UN, land degradation costs the global economy $15trn every year. There will be further challenges to address, but Africa’s GGW simply has to succeed – the world cannot afford for it to fail.