China’s dominance in the surveillance market has historically been fuelled by domestic demand. In recent years, though, the country has begun exporting its artificial-intelligence-powered camera technology, raising concerns over the state of democracy in recipient nations 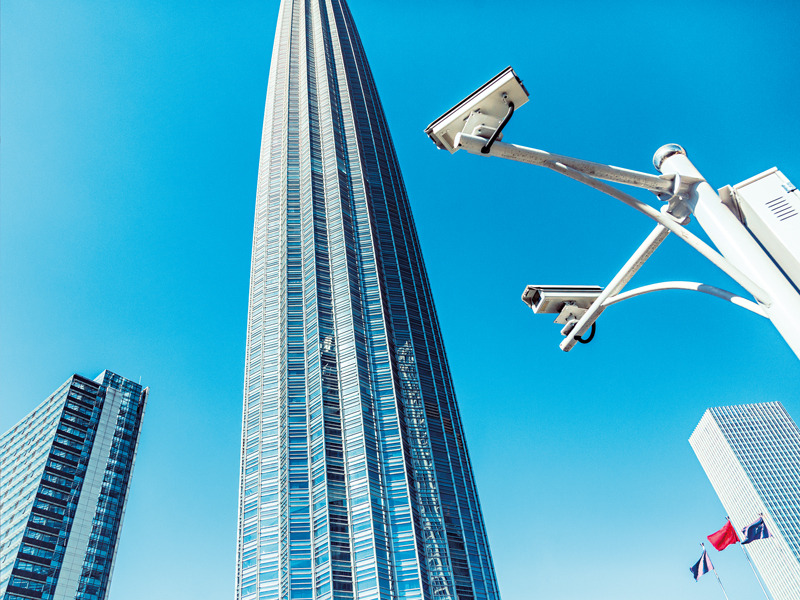 Mass surveillance has been a facet of China’s political regime since the 1950s, but it has become more widespread in recent years
Featured | Government policy
Author: Sophie Perryer

China’s citizens live under the most oppressive surveillance regime in the world. Each day, the Chinese are monitored by more than 200 million cameras, many of which have been installed since President Xi Jinping became paramount leader of the Asian nation in 2013. Not only do these devices surveil citizens as they go about their daily routines, they also feed this information back to a central government database, where it is used to determine each person’s position in society through China’s infamous social credit system.

Given the scale of the country’s mass surveillance regime, it is little surprise that China is also the market leader when it comes to the facilitatory technology. Around 30 percent of global video surveillance revenue is collected by three Chinese firms – Hikvision, Dahua Technology and Uniview Technologies – while the country as a whole was forecast to account for 46 percent of revenues in that market in 2018. The cameras that Chinese firms are producing are years ahead of those made by any other nation, utilising the most advanced artificial intelligence (AI) and facial recognition software on the market today.

Supply and demand
Mass surveillance has been a facet of China’s political regime since the 1950s, but it has become more widespread as access to intelligence-gathering technology – including video cameras, computer monitoring programs and facial recognition software – has improved. “Today, China uses CCTV and face recognition to restrict freedom of movement,” explained Paul Bischoff, an online privacy expert and editor of Comparitech. “People can be placed on blacklists that restrict certain types of travel. [Surveillance] is also being used to oppress dissidents and minority groups, for example, in Xinjiang.”

Ecuador has claimed that the Chinese-built surveillance system, which was completed last year, is being used to bring down murder rates in the notoriously violent country

Due to this political demand, China’s domestic video surveillance market has grown an estimated four to five times faster than that of any other nation. As of 2018, it was worth approximately $20bn. Its growth has also been aided by the nature of China’s manufacturing sector, which is able to produce high volumes of equipment at low prices. “This has made CCTV surveillance much cheaper,” Bischoff said. Chinese firms such as Hikvision and Dahua have been able to drastically reduce prices to a level that few international manufacturers could meet profitably in the long term, according to a 2017 report by research consultancy Memoori. What’s more, given the existing dominance of China’s manufacturers in the domestic market, there’s little chance of a western manufacturer being able to gain a foothold.

As the country’s surveillance regime has intensified under President Xi, the camera technology it relies on has become more advanced. Where previously cameras were simply able to record events taking place within their line of vision, they are now able to identify citizens appearing in footage through powerful facial recognition software, and store information regarding their activities on government databases. Facilitatory technology for these new capabilities is provided by a handful of domestic AI firms, the largest being Megvii, which was established in 2011 by three graduates from Beijing’s famed Tsinghua University. Last year, the firm reported revenues of CNY 1.4bn ($197.4m), quadruple its 2017 takings.

Going global
Until recently, China’s surveillance sector mostly concerned itself with domestic supply – there was little need to look overseas given the level of internal market demand. Around 2011, however, the country spied an economic opportunity and began partnering with other nations that were looking to expand their own domestic surveillance programmes. “China is now exporting its model of… surveillance around the world, offering trainings, seminars and study trips, as well as advanced equipment that takes advantage of AI and facial recognition technologies,” wrote pro-democracy research group Freedom House in its Freedom in the World 2019 report.

One of its first clients was Ecuador, which purchased a basic version of the system that was used to watch Beijing’s residents during the 2008 Summer Olympic Games. Two Chinese firms – the state-controlled China National Electronics Import and Export Corporation and Huawei – predominantly made the 4,300-strong camera network, named ECU-911 by the Ecuadorian Government.

Ecuador has claimed that the Chinese-built system, which was completed last year, is being used to bring down murder rates in the notoriously violent country. But while the system’s implementation has coincided with a drop in overall crime, Ecuadorians have conversely claimed that attacks are still widespread, and even take place in plain sight of the cameras. Concerns have now been raised that the software is being used by the country’s feared intelligence agency, SENAIN, to trail, intimidate and even imprison political opponents of President Rafael Correa.

This latter application of the surveillance network has piqued the interest of other leaders who are seeking to quell political opposition within their own countries. Replicas of Ecuador’s system have also been sold to Venezuela, Bolivia and Angola, all of which operate highly authoritarian and repressive regimes. In total, China has exported surveillance technology to at least 54 countries, according to research by Steven Feldstein, holder of the Frank and Bethine Church Chair of Public Affairs at Boise State University. This has dangerous implications for democracy within those nations. “Surveillance can have a chilling effect on freedom of movement, assembly, speech and expression,” Bischoff told World Finance. “Someone who knows they’re being watched might be afraid to visit a religious place of worship or a political rally.”

China’s domestic video surveillance market has grown an estimated four to five times faster than that of any other nation and, as of 2018, is worth approximately $20bn

Cutting ties
Media attention has tended to focus on China’s relationship with nations operating authoritarian regimes, but this focus overlooks the fact that Chinese surveillance technology has been in use for several years in established democracies such as the US and UK. In 2016, the Peterson Air Force Base in Colorado spent $112,000 on a surveillance camera network made by Hikvision, a company that is 42 percent owned by the Chinese Government. Cameras made by the same firm also watch over a navy research base in Florida.

The US started buying equipment from the Chinese manufacturer in 2010, after Hikvision began undercutting American firms. In the UK, meanwhile, cameras made by Hikvision and Dahua are in use across the London Underground. It has also been alleged that they have been installed within the Houses of Parliament, although this was refuted by a House of Commons spokesperson.

In recent months, however, these two nations have begun terminating their relationships with Chinese firms over security concerns. Last year, US President Donald Trump signed the National Defence Authorisation Act, which prevents federal agencies from purchasing equipment from Hikvision and Dahua, while the UK Government has reportedly banned Huawei from participating in its rollout of 5G. Although this will not have a significant impact on revenue for any of the firms, all of whom do most of their business on the Chinese mainland, it certainly puts an end to China’s expansionary vision when it comes to surveillance technology.

The real economic risk for China lies in its relationships with countries such as Ecuador, where it has had to provide loans to the government in order to fund the sale of its own surveillance technology. ECU-911 came with a $240m price tag, which was well beyond Ecuador’s purchasing power and forced the nation to borrow money from China to pay for the system. What’s more, it’s highly unlikely that China will be able to call in that loan any time soon, especially when you consider that Ecuador already owes the country an estimated $6.5bn. It’s the same story across Africa, where China has lent vast sums of money to a number of nations in order to fund surveillance technology projects at a time when its global development strategy, the Belt and Road Initiative, has left it vastly overexposed in the region.

Although China’s economic growth is in the black and its debt burden is manageable, its current trade war with the US is weighing heavily on exports, meaning the consequences of the country’s overexposure could soon come home to roost. China’s domestic surveillance market will, of course, continue to thrive given domestic demand, but its international ambitions are already under threat due to global debt. While this may be bad news for the Chinese economy, it’s certainly good news for global democracy.