Digital innovation presents the dawn of the smart ports 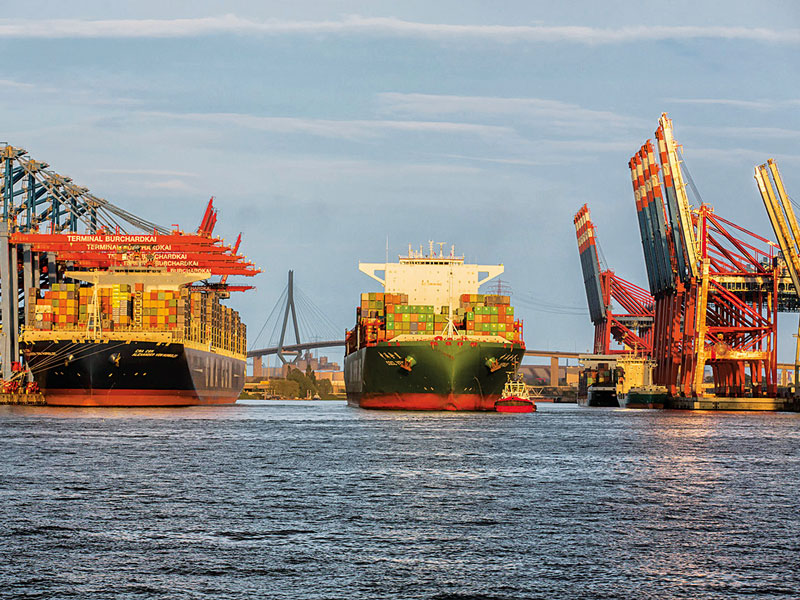 A powerful drone speeds along an inland waterway near Rotterdam and drops a package of spare parts onto a barge on the move, just the latest development in the global phenomenon known as the ‘smart port.’ According to the port of Rotterdam authorities, the trial delivery in late September 2020 went smoothly and now they are pushing ahead with more flights to fully assess the technology’s potential in making the port, the busiest in Europe, into a more efficient, quieter, safer and less polluted environment.

Rotterdam is one of the world leaders in the adoption of digital technologies that are transforming these maritime hubs. “Drones can have a major impact on traffic and transport,” says Port Authority adviser Ingrid Römers. “The next few years will be devoted to the phased preparation of airspace and drone technology.”

Although only one aspect of the smart port, drones are already being deployed to detect levels of pollution in vessels approaching the coastline, to inspect the contents of stacks of containers rather than sending workers up on cranes, and as at Rotterdam, to save time by delivering packages instead of the crew having to come ashore.

Long-term projects
Some ports are turning themselves into centres of innovation. For instance Singapore, the second-busiest in the world in terms of total shipping tonnage, hires the country’s brightest talent to conduct ‘hackathons’, events at which they are encouraged to come up with innovations for its long-term project, the Smart Port Challenge. “The port is working with partners on maritime scale-up initiatives to identify and develop promising maritime tech companies to get them ready when the economy picks up,” chief executive Quah Ley Hoon told the Oceans 2020 conference in early October 2020.

Shanghai, the world’s biggest container port, is following the same path by attracting the best researchers from around the world with its own version of Silicon Valley. Similarly, Rotterdam has invited maritime-focused start-ups to base themselves there. A current project is an energy hub that uses artificial intelligence to predict patterns of consumption and production. The result should be more transparent and lower prices for users, predicts Nico van Dooren, director for new business. “This is a solution that will help achieve the goal of a carbon-neutral port.”

Smoothing the passage
Digital technology lies at the heart of the smart port. Hamburg, the third busiest port in Europe, has installed sensors, camera systems and smart lights on roads in order to monitor traffic, alert users when a bridge is lifting, and to smooth the passage of working barges and other vessels in busy times. One huge benefit of this is a reduction in the number of accidents.

One of the biggest challenges ports face is handling the sheer volume of haulage traffic in and out, but here digitisation and artificial intelligence are coming to the rescue. About 2,500 trucks circulate every day through Montreal, capital of Quebec, passing in and out of the port, the second biggest in Canada, and causing unwanted congestion and pollution in the city. One solution is an app, Trucking PORTal, that alerts drivers to the volume of traffic at port terminals in real time. And in a trend being widely adopted in Europe, it can also provide the latest schedules for the freight trains, something that authorities see as replacing many haulier movements.

This is a key part of the maritime Silk Road, also known as the Belt and Road Initiative. It is a controversial but bold plan to link Chinese and European ports through the South China Sea, southern Pacific and the Indian Ocean in a vast ecosystem in which ports become hubs in a global supply chain. The entire project relies on digital platforms that harness the floods of data flowing around the world and convert it into information that ports can use. Thus ports become ‘intelligent infrastructures’ instead of mere turntables for cargo. Two ports – Piraeus in Greece and Djibouti in East Africa – are among the first to join the ecosystem.

The maritime Silk Road has its critics though, with doubts raised about the heavy debt that recipient countries are forced to take on. For example, China has seized the port in Djibouti because the country could not afford to pay back loans. Ultimately though, the goal of the smart port is to make them productive but congenial places where people want to live, or at least live nearby. In short, they will be given back to the citizens.