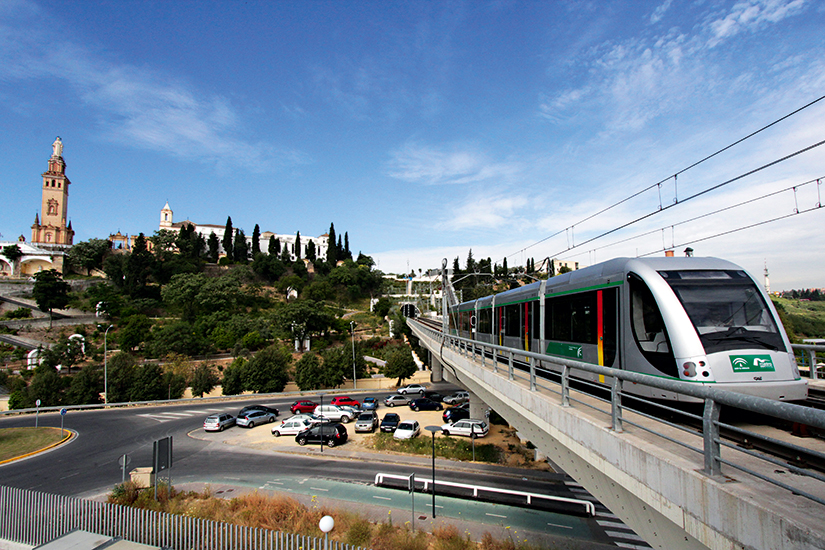 As one of the world’s leading infrastructure management companies, Globalvia is well equipped to see ambitious projects through from conception to completion, not least in the case of the Metro de Sevilla, for which the company won the World Finance Rail Deal of the Year Award. “This transaction consolidates Globalvia as the private operator leader in transporting passengers by metro in Spain and gives the company great credentials to expand its business internationally,” says the company’s CEO Javier Pérez Fortea.

The Globalvia business model is based on the management and operation of assets, both brownfield and greenfield, during a given period in which management and development of the asset is sought.

The location of the railway is also key to the company’s success, given that Seville is the capital, financial centre and largest city in the autonomous region of Andalusia

And with a focus on the railway sector in particular, the company, – which was incorporated in 2007 with FCC and Bankia as shareholders at 50 percent each – is preparing itself for the challenges ahead by building on its portfolio and international renown.

An equity increase operation amounting to €750m was done later on in two phases. In October 2011 Phase I was completed, securing the support of PGGM and OP Trust, and in December 2013 Phase II was completed, with the Universities Superannuation Scheme joining the Globalvia team.

Owing to an astute business strategy and management model, Globalvia boasts a market presence in seven countries and manages more than 30 managed assets in a number of sectors. The company works primarily on highways, ports, and railways, and the acquisition of the Metro de Sevilla represents a key step in its bid for efficiency in the management of transport infrastructure concessions.

Wealth of experience
The Metro de Sevilla acquisition would not have been possible without a wealth of experience to draw on, and it is due to a keen understanding of the project financing process that the deal has gone through so smoothly. “It was a long and complex operation, above all because the significant number of participants in the deal – given their interests and concerns – differed,” says Fortea. “Both flexibility and creativity – on all sides – were necessary to complete the operation.”

The final stake acquired by Globalvia amounted to 88.23 percent for an equity value of €156.2m. The company commenced discussions with Desarrollo de Concesiones Ferroviarias, Iridium and Sacyr Concesiones, who represented a 66.78 percent share of the Metro de Sevilla. Following a lengthy discussion period, both the price of the shares and the share purchase agreement (SPA) were met during a demanding negotiation process.

After having agreed the price and fundamental points of the SPA with a majority stake in the Metro de Sevilla, Globalvia offered the same conditions to the rest of the shareholders and acquired an additional 21.45 percent stake from Grupo GEA21 and Inversiones en Concesiones Ferroviarias (CAF), who owned an 11.15 and 10.30 percent share respectively. The grantor, who was responsible for 11.77 percent of the shares owned through the Agencia de Obra Pública de la Junta de Andalucia (AOPJA), was uninterested in selling.

The deal was closed at the same time as the signing of the SPA, with each shareholder maintaining the same price per share. The acquisition consolidated Globalvia’s position as a railway sector leader in Spain, and boosted the company’s credentials.

An attractive proposition
Aside from boosting the company’s business credentials in the infrastructure management space, the Metro de Sevilla itself is a unique asset, and has a number of qualities to it that make for an attractive proposition. The Metro de Sevilla is a long-term asset, and has 26 years remaining on its lifespan before it expires in December 2040. The project also enjoys recurrent cash flow and combines availability-type payments with traffic-linked revenues, while also generating high cash flow with distribution to shareholders from the first operational year.

The Metro de Sevilla is also an under-leveraged asset and presents an opportunity for medium term re-leverage. To underline the unique qualities of the acquisition subject, the Metro de Sevilla withstood the repercussions of the financial downturn and – despite operations beginning midway through the crisis – revenue performance grew through 2010 to 2012 at a compound annual growth rate of 1.8 percent.

What was, on completion, the first metro managed by a private operator in Spain – later joined by Metro de Málaga in July 2014 – has performed ahead of expectations and seen an increase in demand on a daily basis. “It is important for us to manage an asset that provides service to a high amount of clients and users. They appreciate the service that the Metro de Sevilla gives,” says Fortea. “This is a great honour for us and motivates us in improving the quality of our service on a daily basis.”

The concession was awarded in May 2003 by the AOPJA to a consortium formed by Desarrollo de Concesiones Ferroviarias, Iridium, Sacyr, Gea 21, CAF, Salvador Rus López Construcciones and Transportes Urbanos de Zaragoza. During the construction period, which ended in November 2009, several transactions took place between shareholders, leaving Iridium with 34.01 percent, Sacyr Vallehermoso with 32.77 percent, Grupo Gea 21 11.15 percent, CAF 10.30 percent and AOPJA with 11.77 percent.

The objective of the concession is to design, build, finance, operate and maintain Line 1, which spans 18.1km and passes through 22 stations. However, due to a significant increase in construction costs, an economic rebalance agreement was signed in 2009 that extended the concession term until December 2040 and increased the revenues (technical tariff). Additional financial rebalancing occurred again in 2011, resulting in an additional increase of the 2011 technical tariff, due to a requirement of additional works issued by the authorities.

Ideal location
The location of the railway is also key to the company’s success, given that Seville is the capital, financial centre and largest city in the autonomous region of Andalusia. With a population base of over 700,000, the city is the fourth largest in Spain and one of the 30 most populous municipalities in the EU, representing a key strategic market for those looking to capitalise on Europe’s budding financial prospects.

Managed by more than 170 employees, the 18.1km line connects the centre of Seville with two key points of the metropolitan area (the municipalities of Aljarafe and Dos Hermanas) and serves the four areas of Dos Hermanas, Mairena del Aljarafe, San Juan de Aznalfarache and Seville Centre. It is a key asset for public transport in greater Seville, and, since its completion in 2009, is the region’s only metro line. Operational activities are managed in-house, while maintenance is mainly subcontracted to suppliers with a strong relationship with the previous shareholders. Globalvia believes that strong operational improvements can be achieved to the point of increasing outstanding quality ratios.

The concession has four revenue streams, combining availability payments and traffic-linked income, which make for solid growth with low elasticity in traffic variances. The opening times of the Metro de Sevilla are always focused on providing the city with as much support in transport as possible.

For example, at Christmas, Easter and the April Fair special, services are provided to extend the timetable and increase the running frequency at peak times. Service-strengthening devices have also been put in place, depending on other special events. During peak hours, there are 16 vehicles in operation, whereas on special occasions, such as the Annual Fair and football matches, all of the 21 vehicles could be in operation at any one time.

As a world leader in the infrastructure management sector, Globalvia and its management of the Metro de Sevilla project offers a glimpse into what can be achieved with an intelligent financial structure and the right partners in place.

Pension Deal of the Year – USS Pension Fund Financing
The Universities Superannuation Scheme (USS) is one of the largest pension schemes in the UK, representing academics and related support staff in the higher education sector. In December 2013 it announced that it had committed €150m to Globalvia, in the form of a convertible loan. Arranged by USS Investment Management (USSIM), a wholly owned subsidiary of USS and its principal investment manager and adviser, the structured facility added to the growing USS portfolio of infrastructure debt and equity investments. The transaction is also consistent with the company’s strategy to develop private-market investment opportunities that fit its long-term pension liabilities. The subsidiary committed €150m, alongside PGGM and OPTrust, who committed an additional €100m each following a €200m investment in 2011. This total of €350m from the three pension funds assisted Globalvia in expanding on its existing worldwide portfolio of infrastructure and reasserting its dominance in the infrastructure management market.