How the Trans-Pacific Partnership will affect global trade

The Trans-Pacific Partnership is expected to send ripples throughout global trade. At the end of it all, Vietnam’s textile industry is likely to emerge as the biggest victor 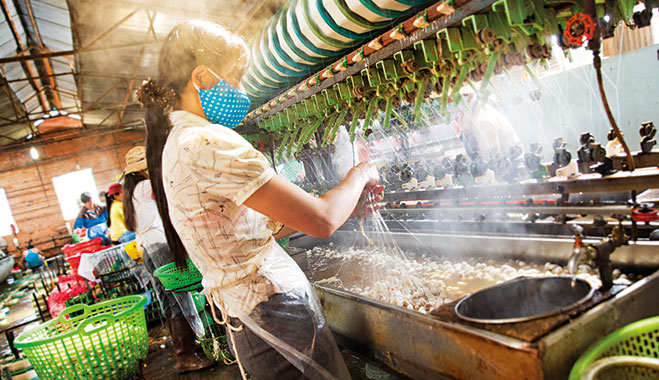 Workers at a silk factory. Vietnam’s textile industry is set to benefit enormously from the terms of the TPP agreement
Infrastructure | Inward Investment
Author: Elizabeth Matsangou

On October 5, 2015, after seven years of drawn-out negotiations and meticulous bargaining, the day that thousands of manufacturers around the globe had been anticipating finally arrived: the Trans-Pacific Partnership (TPP) was concluded. The full impact of the new trade agreement, which is due to be ratified sometime this year, is not yet known, but what can be presumed is that a new era in global trade has begun.

The TPP is formed of 12 Pacific Rim countries: the US, Canada, Mexico, Chile, Peru, Japan, Singapore, Vietnam, Malaysia, Brunei Darussalam, New Zealand and Australia. The alliance seeks to open up markets, while enforcing a high standard of trade rules across an expansive area. The TPP partners also hope to create new opportunities for manufacturers, service providers and workers, in addition to supporting job creation and stimulating wages. Among the industries standing to benefit are pharmaceuticals, automobiles, tech firms and agriculture. That said, it is the textile industry that has sparked the greatest interest among international investors.

A rising star
Since the late 1990s, Vietnam’s textile and apparel sector has shown impressive growth and export revenue. In less than two decades, the country rose rapidly through the ranks to become one of the world’s top 10 textile exporters. This played a significant role in the socioeconomic climate of the country as a whole, as the textiles industry has contributed around 2.3 million jobs, 80 percent of which are held by women.

“The significant growth in Vietnam’s textile and apparel industry is due largely to two factors,” according to Christian Lewis, Lead Analyst on Vietnam and Myanmar for the Eurasia Group.

“First, Vietnam has had, and continues to have, cheap labour, which has become an increasingly attractive feature of the market, given the consistent upward trend in manufacturing wages in the other main engine of manufacturing, southern China. Additionally, during this period Vietnam’s business environment has grown more suitable for foreign investors to provide the capital inputs necessary to develop an industrial base.”

Government initiatives encouraging international investment have thus contributed to this recent success, with foreign firms accounting for 60 percent of the industry’s export revenue. Moreover, the nature of the business, in which only a small capital investment is required for fast profit turnaround, has further stimulated investment.

Without the TPP in place, manufacturers in Vietnam would continue to face a tariff of 17 percent for exports to the US – now, however, the levy will dramatically drop to almost zero percent. With textile exports expected to increase substantially, both domestic and foreign investment are starting to pour into the country. Notably, businesses from outside the TPP zone are also setting up production in Vietnam, in order to benefit from preferential treatment and favourable access to the US market.

“In anticipation that the TPP would be completed successfully sometime in the not too distant future, textile and apparel companies in Asia began investing in countries that would be part of the TPP. The most visible example is certainly Vietnam, where investments have surged in the past few years,” said Dr Christian Schindler, General Director of the International Textile Manufacturers Federation.

For example, South Korean-owned Don-IL Corp recently started construction on a $52m yarn factory in the south of Vietnam, while Taiwanese manufacturer Forever Glorious has announced plans to build a $50m weaving and dying factory for premium sports garments. What’s more, as Dr Schindler explained to World Finance: “Since China is not a TPP country, many Chinese spinning companies have already invested in Vietnam in order to benefit not only from the attractive labour costs and from the proximity to China’s textile industry, but also from the TPP.” The course ahead
Despite its many benefits, there is one snag to the TPP for Vietnam: the ‘yarn forward’ Rule of Origin (ROO), which requires that, in order to export apparel to another member state, all materials used must have been produced within the TPP region. At present, Vietnam sources over 85 percent of the materials used in its garments from China and South Korea. As a result, Vietnamese manufacturers must now change suppliers to fellow TPP members, and will thereby lose out considerably when it comes to price competitiveness.

In order to offset these mounting production costs, domestic textile firms are now aiming to establish their own weaving and dying operations in the country – for example, state-owned Vinatex, Vietnam’s largest textile firm, recently announced plans to invest over $714m to expand and upgrade its operations, as well as its supply chain capabilities. Similarly, apparel giant TOMS signed a $12bn deal with a leading Japanese garment manufacturer last April, which will see a vast garment dying complex constructed in central Vietnam. While Vietnamese authorities have pushed for exceptions to the rule, ROO is a crucial tool in ensuring global competitiveness, and was also established to provide protection for the US producers who stand to lose out from the TPP.

The Vietnam Textile and Apparel Association estimates that the TPP will enable the industry’s turnover to double while creating 250,000 jobs for every $1bn of export revenue growth. Of course, in order to successfully capitalise on the opportunities now available to Vietnam, various measures must be taken. Additionally, the state must act fast in order to further facilitate foreign direct investment, particularly before the TPP is expanded. Likewise, being the least developed economy of the TPP countries, the competitiveness of Vietnam’s service sector is also expected to improve so as to meet TPP regulations.

“In terms of key challenges, there are few that will impede near-term textile sector growth, given that there is so much low-hanging fruit to be had,” Lewis told World Finance. “As industrialisation continues, however, the supply of electricity has the potential to become a more problematic constraint. The government has yet to adopt a price mechanism set by the market, and as a result there is an underinvestment in future capacity that could start to constrain output before 2020.”

Furthermore, as more international firms enter the market, Vietnam’s abundant labour supply – which the industry is largely reliant upon – will begin to decline, together with its low employment costs. During this transition period, it is therefore crucial for textile firms, including state-owned enterprises, to invest considerably in technology, in addition to improving corporate governance, in order to maintain their competitive edge in the global market.

Economic impetus
“Once ratified later this year, the reduction in trade barriers will create new and unprecedented market access for Vietnamese products in the US market, the world’s largest source of demand,” said Lewis. This closer alliance with the US, which Vietnam has been pursuing for some time, will enable the state to diminish its dependence on its biggest trade partner, China (see Fig. 1). In 2014, Vietnam’s trade deficit with the Republic was a mammoth $28.96bn, but the country’s new trade ties will enable it to take a bold step away from China’s economic influence, which in turn will enhance its autonomy and securitisation in the region.

In anticipation of Vietnam’s new economic standing, the World Bank estimates that the state’s GDP growth will increase by eight percent by 2030. What’s more, the administrative, legal and institutional reforms that must be made as part of the TPP agreement will naturally push the development of both private and public sectors considerably.

In essence, TPP market principles necessitate a more competitive and transparent system, which could very well lead to the expansion of Vietnam’s middle class in the not too distant future. This will be helped further by the explicit labour rights required by the TPP, including the right to unionise, which indicates that powerful social changes can be expected in the coming years. When these milestones are achieved, the comprehensive liberalisation of Vietnam’s economy is likely to follow, along with greater chances for the liberalisation of its political system in equal measure.