With Vietnam’s economy expanding at an impressive rate, navigating its unique business culture is vital for potential investors hoping to enter this burgeoning market 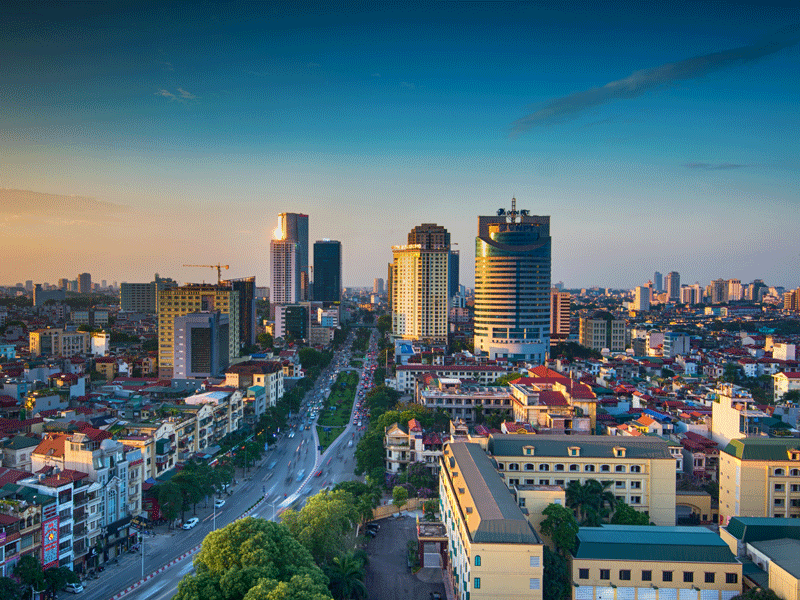 Hanoi, Vietnam. The country's economy has been transformed over the last generation, with reports suggesting it will be among the world’s 32 most powerful economies by 2030
Markets
Author: Julie Giguere, Managing Director, Asian Absolute

After decades of war, hunger and economic sanctions, Vietnam reached a turning point in 1986. The general secretary of the ruling communist party and former leader of the Việt Cộng, Nguyễn Văn Linh, implemented the policy of Đổi Mới, or ‘renovation’. Like Gorbachev’s Perestroika initiative in the former USSR, the aim was to create a socialist-orientated free market economy. In 1994, Bill Clinton lifted the 19-year post-war US trade embargo, and Vietnam entered the global marketplace.

As a result, Vietnam’s 94 million people have experienced huge economic change within the last generation. The national GDP is now around $180bn – a stratospheric leap from just $6bn in 1990. As of 2017, 24 of the 28 EU nations have invested in around 2,000 projects in the country, with total registered capital reaching $21.5bn. Industry, construction, and services were the major sectors that attracted the majority of EU capital.

Real GDP in Vietnam is projected to expand by 6.8 percent this year (up from 6.5 percent in the previous forecast), before moderating to 6.6 percent in 2019 and 6.5 percent in 2020. In addition, a PwC report published in 2017 suggested that Vietnam would be among the world’s 32 most powerful economies in 2030, ranked ahead of the Netherlands and South Africa.

The Vietnamese are incredibly open and optimistic about foreign investment and the opportunities brought by increasing integration in international markets. They are also usually very keen to share their proud culture, tradition and history with foreigners in order to protect their local customs and heritage in a rapidly developing and outward-looking society. Therefore, even the slightest acknowledgement of Vietnamese culture can earn foreigners a lot of esteem. With all this in mind, we share the top five tips for doing business in Vietnam.

1 – Greetings
The Vietnamese language has an interesting set of pronouns. There is no direct translation for ‘I’, ‘you’, ‘he’ or ‘she’ in Vietnamese, because the words used to address people are decided by generation as well as gender. For instance, someone younger than you will be addressed as ‘em’, while a friend the same age is ‘ban’, yet a male your grandfather’s age is ‘ong’. Dozens of pronouns are necessary to help fully articulate the strict generational hierarchy of Vietnam.

The elder generations’ struggles and sacrifices on the road to freedom and independence are highly respected by Millennials. Most teenagers would agree that their parents know what’s best when it comes to big decisions about their future.

Experience, wisdom and pragmatism take precedence over youthful idealism. Therefore, it’s always best to offer a two-handed handshake to the oldest people in the room first, and the youngest last.

When pitching an idea, try to have an experienced colleague focus on the practical real-world solutions you’ve already established, rather than losing your audience in speculative, ideological or conceptual discussions.

2 – Eating
Generation also plays a key role when eating. Usually, meals are a family occasion, so paying individually is a baffling practice for most Vietnamese. If you invite a group of people to eat with you, it’s your responsibility to settle the bill, with the oldest male traditionally reaching for his wallet.

Vietnamese people love to eat and are very proud of their traditional cuisine. They will be overjoyed to hear foreigners hum while eating and saying the word ‘delicious’. Rice products, noodles, fresh vegetables and hotpots form the backbone of the Vietnamese diet, along with every kind of meat imaginable. Tropical fruits like guava or green mango, served with salt, are a common snack during meetings,

It’s also worth bearing in mind that lunch is a meal reserved for family. Between 11:30am and 2pm, schools close and workers go home so that families can enjoy lunch together. As Vietnamese working hours can stretch from 7am-9pm in tropical weather, Vietnamese people also like to take a nap around midday. It’s not wise to suggest a call or meeting that might disturb this institution, so a business dinner is a much better idea than a working lunch.

3 – Making conversation
When sitting down to eat, you might be surprised by some of the questions you are asked. It is uncommon for people to ask “How are you?” as there is no direct translation in Vietnamese (the closest being: “Do you have strength?”)

Vietnamese people may ask “How old are you?” – usually considered a faux-pas. But don’t be offended – this is just to gauge how they should address you as part of the generational hierarchy. In fact, trimming years off your true age may prove detrimental.

More common opening questions in Vietnamese include “Where are you from?”, “How many people in your family?” and “Are you married yet?” The family unit is still very strong in Vietnam, and sharing pictures of loved ones enjoying free time together will be very endearing, portraying a person of wholesome character.

Image is important in Vietnam, especially when doing business. You must be professional, but it also helps to illustrate that you are a charitable person and dedicated family member.

4 – Being honest
When sharing photos, try not to be taken aback by common Vietnamese compliments like “Your daughter is so beautiful” or “Your family are so rich”. Due to their mother tongue’s simple grammar and logical vocabulary, people in Vietnam generally call things as they see them and prefer to communicate in a very clear and simple manner. This can lead Vietnamese people to sometimes come across to Westerners as quite abrupt, especially if they ask frank questions like “How much do you earn?”

However, some in business might find this refreshing, as cutting to the chase and displaying results can be much more effective than drowning people in euphemisms and jargon.

5 – Negotiating
Don’t be afraid to articulate your position clearly, because you’re going to be negotiating. Like most Asian countries, Vietnamese businesses tend to favour tailored, flexible deals over standardised, fixed arrangements.

The figure you’re quoted first is usually just your trading partner’s target; their ideal result of the negotiations. Your response should then be your minimum amount, which then sets the range in which negotiations can take place.

Vietnam’s exponential growth has created an optimistic economy, but one that is also increasingly competitive. Businesses are eager for foreign investment to gain the advantage. It is therefore important to understand the context in which you are negotiating and offer the right sweeteners to any deal. For example, long-term sustainable partnerships with flexible terms are seen as favourable to rigid contracts with short-term gains.

Image is also paramount, and doing business with large organisations in developed countries is a big indicator of success and prestige to Vietnamese consumers. Any deal involving publicity, marketing and media opportunities boasting international relationships would be very desirable.

It’s also crucial to remember that Vietnam only joined the global marketplace three months before Jeff Bezos founded Amazon. Free markets are still somewhat of a new phenomenon. Vietnamese businesses are keen to learn the secrets of successful, sustainable growth from large multinational firms. Offering cutting-edge software, online technology or simply secrets to international success in your industry will likely sweeten any deal.