By pouring investment into international infrastructure projects, China hopes to expand its historic trade route. However, such ambitious plans have left the Asian superpower stranded amid unprofitable ventures 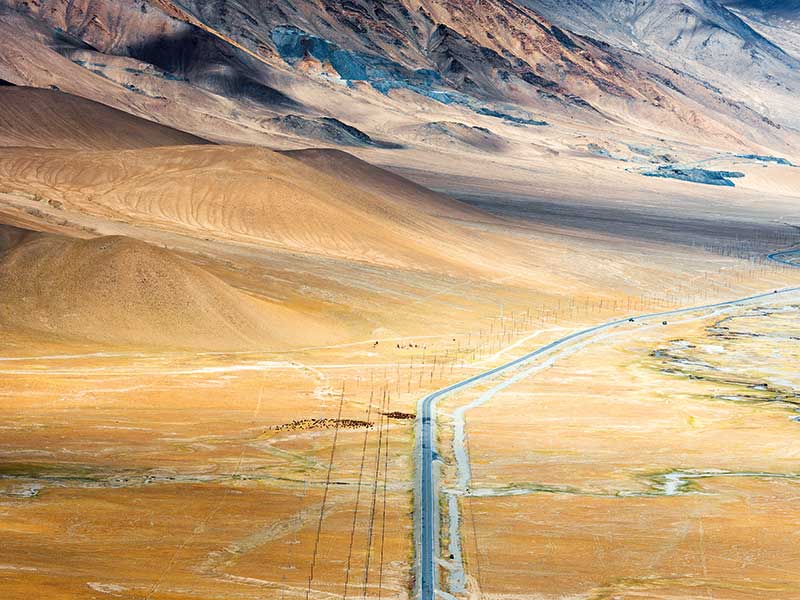 When Chinese President Xi Jinping unveiled his cherished Silk Road Economic Belt project in 2013, the scale of his ambition was so vast that it hardly seemed credible. China would rebuild its historic trade route, but this time taking it even further than the Han Dynasty did in 206 BC. Xi’s modern Silk Road would stretch all the way to Europe through central and western Asia. For good measure, there would also be a maritime route connecting China with south-east Asian countries, Africa and Europe.

If anything, the grand plan has gotten even bigger since, embracing much of Latin America and sub-Saharan Africa. Bankrolled by state-controlled lenders, Chinese hydropower contractors are dominating greenfield projects in much of Africa. As such, they appear to have the inside track on bidding for the $5-12bn Grand Inga Dam expansion in the Democratic Republic of Congo – set to be the biggest hydropower contract in the world.

Although China has borne the bulk of the debt, it isn’t funding the Silk Road all by itself. Another financial engine is the Asian Infrastructure Investment Bank (AIIB), although this was admittedly launched by China two years ago with $100bn in authorised capital. The AIIB is steadily building up its war chest, with the help of private sector investment in the shape of pension funds and other sources of capital, through a big-ticket series of public-private partnerships.

The grand plan for a renewed Silk Road has gotten even bigger, embracing much of Latin America and
sub-Saharan Africa

The AIIB, which has 57 member states (the US is not one of them, due to its fears over Chinese ambitions in the region), needs all the funds it can get; it has identified an $8trn backlog of large-scale projects such as toll roads, power plants, seaports and airports. Top of the list is infrastructure in Asia, but the bank has ambitions to expand into other regions later, to the considerable benefit of China. With its current president being Chinese national Jin Liqun, the AIIB is largely controlled by the Asian superpower.

In the pursuit of its ambitions, the AIIB is handing out money like water. In 2016 – its first full year of operations – the bank pumped $1.3bn into nine major infrastructure projects, including ones in Azerbaijan and Oman. And it’s keeping up the pace: in early May, for example, it approved a landmark $160m loan for a power project in the Indian state of Andhra Pradesh under the country’s Power for All initiative. There will be a lot more money where that came from. As AIIB President Jin said: “We expect [this] to be the first of many projects that AIIB invests in India.”

Debt trouble
For 2017, the AIIB has drawn up a long laundry list based on what it calls “cross-border connectivity” – which is another way of saying ‘Silk Road’. On the agenda are roads and rail, ports, energy and telecommunications infrastructure right across central Asia, along with “maritime routes into south-east and south Asia, the Middle East and beyond”.

But the paving of the Silk Road with low-priced debt has got China into trouble in some regions, particularly following the collapse in the price of crude oil. In Latin America, for example, state-owned lenders have been forced to swap infrastructure-funding debt for the supply of oil as recipient countries run out of revenues with which to pay China back.

The policy has also backfired in other locations. As the Oxford Institute for Energy Studies pointed out in a definitive recent report, crisis-hit Venezuela provides a sobering example: in mid-February, China agreed no less than 22 new deals aimed at propping up the South American country’s fast-declining oil industry. Although the ever-hopeful President Nicolás Maduro characterised the deals as heralding “our country’s economic recovery”, it looks more as though China is taking control of its wells and refineries in an infrastructure-for-debt swap.

The situation in several other countries must be making China’s state-guided lenders wish they’d never gotten involved. Ecuador, for example, is struggling to maintain agreed production levels, while in Angola plummeting oil revenues are jeopardising the government’s ability to repay its debts to China. Iran, meanwhile, is not fulfilling China’s hopes either.

In late January, rating agency Fitch expressed its concerns about whether some of these oil loans will ever be honoured, citing the low sovereign rating of several recipient countries. It warned: “The lack of commercial imperatives behind [Silk Road] projects means that it is highly uncertain whether future returns will be sufficient to fully cover repayments to Chinese creditors.”

In other words, unless global crude prices rise by at least 10-20 cents a barrel, many of these loans won’t pay off. And China still hasn’t achieved the energy independence it wanted when it began investing in Latin America. As the Oxford Institute pointed out: “Despite the billions invested in global oil markets, China still relies on Russia, Saudi Arabia, Iraq, Angola, Oman and Iran for two thirds of its imports.”

But with so much capital in play, China can hardly back out now. The Oxford Institute noted: “After investing so heavily, Beijing has few options but to maintain support for these countries in a bid to sustain oil production, at least enough to ensure loan repayment and equity output.” In short, China must pour in good money after the bad.

Brazil is a case in point. In April 2016, the China Development Bank agreed on a fresh $10bn oil loan to help bail out cash-strapped, corruption-ridden Petrobras. But, unlike Venezuela and other recipient countries, at least Petrobras had the oil.

China in Africa
In the meantime, China continues to invest fearlessly in other countries (see Fig 1), particularly in Africa. The lender is typically Exim Bank, whose cheap funding lies behind much of China’s rapid expansion in the region as it gives contractors a price advantage over western competition. According to an OECD report issued in late 2016, in the past five years China has pumped around $13bn into the sub-Saharan energy sector alone in the form of direct loans, buyer/seller credits and foreign direct investment.

That’s how Chinese contractors built nearly all the new power capacity in the region between 2010 and 2015. More than 150 projects were completed in the past five years, and at least another 50 are under construction or approved. And while dominating in hydropower, Chinese companies cover the entire energy mix including renewables, a sector where they’re responsible for 56 percent of new capacity, among them a 600 MW coal-fired plant in Botswana, the 400 MW Bui Dam in Ghana, a 100 MW diesel-fired power plant in Niger, and a 244 MW wind farm in Northern Cape, South Africa, as well as geothermal projects in Kenya.

Although there’s some alarm surrounding China’s geopolitical ambitions in the region, generally the OECD approves its role in the region’s hitherto capital-starved energy sector. “China has become an important source of financing in Africa”, the report noted. “Chinese engagement in power covers all primary sources except nuclear, and all sizes of projects, while donors from OECD countries avoid financing large hydropower dams or coal-fired power plants.”

China has certainly picked up the plum contracts. As the OECD added: “The share of greenfield power projects contracted by Chinese companies equals those contracted by companies from the next four largest countries combined: France, Italy, Finland and the United States.”

Building bridges
As well as building infrastructure, on its own doorstep China is busy erecting financial bridges that underpin its wider involvement in Asia’s roaring economy. It started off with Singapore, which sees itself and Shanghai as the financial powerhouses of the Silk Road. The Monetary Authority (MAS), Singapore’s financial watchdog, noted earlier this year: “Both financial centres can work together to develop innovative capital market solutions for infrastructure projects in China, ASEAN and in third countries.”

In the past two years, Singapore has fallen over backwards to help bring Chinese companies into the region, some for the first time as they venture beyond their own borders with President Xi’s encouragement. During this process, MAS has opened a regulatory dialogue that is set to pave the way for nothing less than a “new Asian financial landscape”, as the authority’s Deputy Managing Director Jacqueline Loh described it. She was speaking not long after MAS signed up to participate in China’s interbank foreign exchange market and, in another boost for the growing power of the renminbi, the authority started buying yuan-based assets for Singapore’s official foreign reserves. If this isn’t a seal of approval for China’s ambitions, nothing is.

With China’s vast financial sector encroaching on the borders of the rest of Asia, Jacqueline Loh’s promise of a new Asian financial landscape is no exaggeration. For instance, financial conglomerate Ping An has 109 million core finance customers and an internet user base approaching 300 million, while Tencent – although known as a gaming and social networking site with 800 million active users – is already expanding into finance with vast potential beyond its home base. And then there’s e-commerce giant Alibaba, which has its own global ambitions.

China’s fast-growing fintech industry is also poised on Asia’s doorstep. Of the world’s five biggest fintech firms, three – top-ranked Ant Financial, fourth-ranked Lu.com and fifth-ranked ZhongAn insurance – are based in or near Shanghai.

As the region develops common standards of regulation, firms such as these are bound to push along the Silk Road, where the financial opportunities are off the scale. According to statistics compiled by MAS, the financial system in Asia could reach $200trn by 2030 – this is four times its current size and more than double the projected size of the financial sector in the US.

Regional nervousness
To put it mildly, not all nations in the region are as sanguine about the Silk Road as Singapore. In fast-developing and resource-rich Myanmar, the reforming administration headed by Aung San Suu Kyi is not nearly as pro-China as the old military regime was, which had long been cultivated by Beijing. As the World Economic Forum pointed out, Myanmar is a new energy frontier lying between China and India, at the very crossroads between east and south Asia – and China wants a piece of it.

At the time of writing, the two countries had finally struck a deal on the much-delayed, $1.5bn, 770km oil pipeline across Myanmar to land-locked Yunnan in south-west China. It had been sitting empty for two years after a standoff between the two countries over what Myanmar saw as highly unfavourable terms that China had tried to railroad through. China sees the pipeline as an important part of the Silk Road project, because it has the capacity to provide five percent of its daily import demand and take the pressure off deliveries made through the contested Malacca Strait.

Eventually though, Myanmar will have to find a way of cooperating with its giant neighbour, just as other nations lying along the route of the Silk Road will. With a population of 54 million compared with China’s 1.35 billion and a threadbare (though improving) economy, Myanmar is in no condition to withstand its partner’s global ambitions. For these reasons, despite their misgivings about China’s occasional strong-arm tactics – for instance, in the hotly disputed, hydrocarbon-rich China Sea – nations such as Singapore, Malaysia and Indonesia are learning to embrace the Silk Road, wherever it may lead.