How one company is planning to revitalise a region

Projects to harness the rich resources of Eastern Siberia have continued at pace over the last few years, with investments in the construction of the Irkutsk Polymer Plant having reached $1bn. Irkutsk Oil Company is on the precipice of bringing about meaningful change in the region as a result 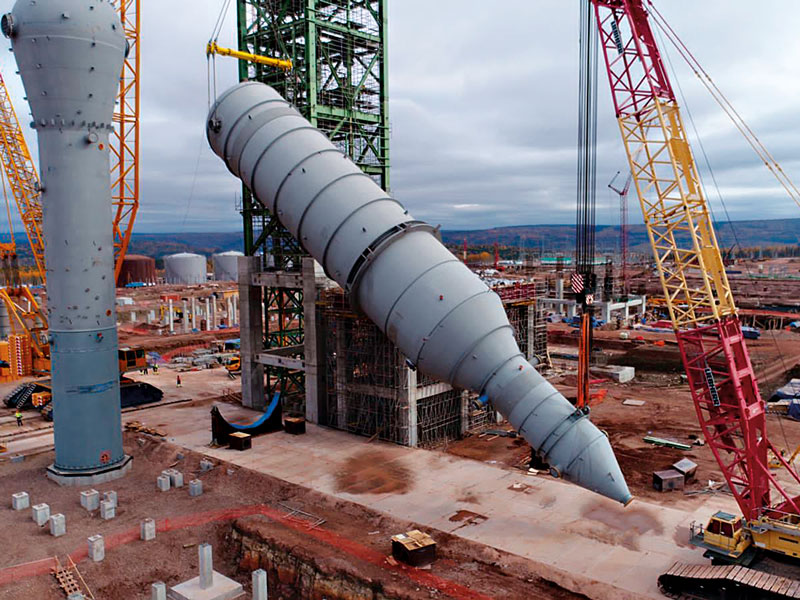 The Irkutsk Region of Eastern Siberia is prosperous in gas resources, but gas supply is in little use for industrial needs or residents — gasification of the region is only about 10 percent. Natural gas in Eastern Siberia has not been in demand for decades due to a lack of transportation infrastructure and sales markets. That’s all set to change with the commissioning of the Irkutsk Polymer Plant in the district of Ust-Kut.

As Yakov Ginzburg, General Director of Irkutsk Oil Company, a parent company of Irkutsk Polymer Plant, says: “Reasonable environmental management and the search for new business development areas in the face of OPEC+ oil production restrictions were the key triggers for transition into the vertical petrochemical enterprise.”

Since 2014, the company has been forming a gas chemical cluster in the north of the Irkutsk Region, which includes gas production, treatment, transportation and processing facilities, two helium plants, and a polymer plant. It is estimated that total investments in gas projects will amount to 500bn Roubles ($7bn); 200bn Roubles ($2.8bn) have already been invested. Gas processing plants and a gas fractionation unit are also scheduled for commission in 2022.

The first helium plant will be put into operation in 2022, with a second plant scheduled to start operations in 2025. The total production output is expected to be 15–17 million litres of liquefied helium per year, turning the Irkutsk Oil Company Group into the second largest helium producer in Russia and among the top 10 in the world.

The Irkutsk Polymer Plant – the construction of which is now 40 percent complete – is the largest component of the gas chemical cluster. It is scheduled for commissioning in 2024, with a production capacity of 650,000 tonnes of commercial grade polyethylene per year.

More than 2,000 people are currently working on the site of the plant, with the Japanese engineering company Toyo Engineering responsible for design, equipment and material supply, and Gemont (Turkey) working as the general contractor on both the polyethylene and ethylene plants. Engineers and labourers come from all over Russia, as well as from Japan, Turkey, France, Holland and the USA. At the end of 2022 the number of employees will increase to between 7,000 and 8,000.

The total cost of the Irkutsk Polymer Plant is estimated at 250bn Roubles ($3.5bn), which includes the construction of a housing estate for the plant’s employees in Ust-Kut. Compared to initial estimates, the amount has increased due to the rise in the cost of materials including steel and concrete, as well as labour costs for construction and installation work.

During 2020 and 2021, earthworks and foundations for large equipment were carried out at the site, the installation of which began in June 2021 and was completed in September. In total, 44 units of large equipment have been installed at the polymer plant. They were delivered to Ust-Kut from the South Korean port of Masan via the Northern Sea Route in the summer of 2020. A 500-tonne purge bin was the last piece to be assembled. Installed in a metal frame at a height of 60 metres, it required two cranes with lifting capacities of 1,600 (the largest in Russia) and 750 tonnes.

One hundred thousand cubic metres of concrete had been poured by the start of November this year, though that figure will have more than doubled by the end of the project. For comparison, 20,000 cubic metres of concrete were used in the construction of the foundations and concrete trunk of Moscow’s Ostankino Tower, the tallest freestanding structure in Europe. The next stage of work at the site is to install 1,100 pieces of small equipment, auxiliary equipment and systems.

Overcoming the challenges of the region
Ust-Kut, like most northern territories, has many problems. In the 1970s, during the construction of Baikal-Amur Mainline railway, it was a pleasure ground for the youth of the Soviet Union. After that, the era of stagnation began. A lack of modern social and community facilities and infrastructure, modern healthcare system and good quality education, as well as deteriorated utilities, have all been a catalyst for migration away from the region. These issues remain unresolved to this day.

One of the challenges facing this ambitious project is a labour shortage – the launch of the polymer plant will create 1,600 new jobs. Tempting workers to relocate to Ust-Kut to fill those roles will be key to the plant’s success. In order to ensure comfortable living conditions for its personnel, the company decided to build a residential zone with capacity for 3,000 people, ample not just for plant employees but their families too. Among the facilities on offer, which will also be available to existing residents of Ust-Kut, are 30 housing developments, a school for 520 pupils with a swimming pool and a stadium, and two kindergartens. Commissioning of the first apartment buildings will coincide with the start-up of the plant; the entire complex will be ready by the end of 2025.

The Irkutsk Oil Company has played a vital role in supporting the region’s health system over the course of the pandemic, donating over 700m Roubles (approx $9.1m) so far. One of the key projects was the construction of a modern hospital with its own oxygen station for COVID-19 patients in the city of Ust-Kut. The 60-bed medical facility has single and double wards with modern equipment. The company has also contributed medicines, personal protective equipment and medical devices to other hospitals and medical institutions in the region.

A greener future
In Russia, as in the rest of the world, the green agenda has become mainstream. The Irkutsk Oil Company has long been ahead of the curve, implementing as far back as 2009 the sorts of projects that other companies only began adopting with the arrival of the ESG agenda in recent years. Irkutsk Oil Company, for example, was the first in Russia to launch recycling as part of its processes – the reinjection of gas into the reservoirs. The company is actively engaged in reforestation, planning to plant seedlings over an area of 3,000 hectares by 2023. It’s also engaged in bioresource restoration: 500,000 juvenile graylings were released into the Lena River in the summer of 2021. An additional 120,000 fry are still to be released into the region’s water bodies. In addition, Irkutsk Oil Company has developed its own energy-saving and green technologies, and no PET water bottles are allowed on company property.

There is always scope for new ESG opportunities. A feasibility study is being developed in cooperation with Japanese partners for the production of blue ammonia, for example, a product considered to be the fuel of the future as it does not emit greenhouse gases (CO2). The company’s specialists are also studying the technologies of CO2 capture, injection and processing, as well as methane emission reduction. The company plans to create an eco-industrial park for on-site recycling.

Irkutsk Oil Company is laying the foundation for a better future and playing a vital role not just in its own industry, but in its attempt to revitalise a region and play an active part in a global agenda for change.