The recent turmoil in emerging markets, starting from the US Federal Reserve’s decision to taper off its bond purchases and culminating in Russia’s position on Ukraine, has brought to the fore the issue of risk aversion 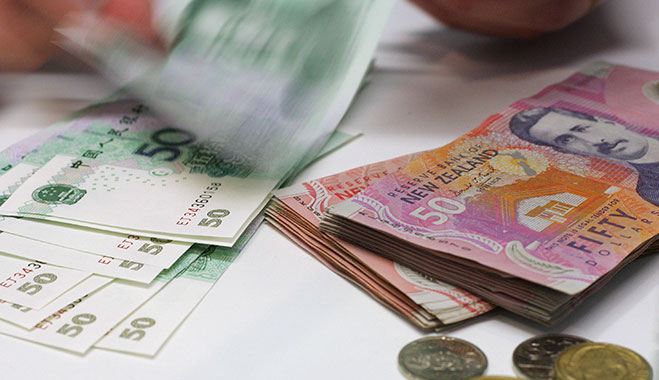 A currency exchange teller counts out Chinese Yuan alongside a stack of New Zealand dollars. Both New Zealand and Australian currencies tend to get hit immediately during the beginning of risk-off periods
Forex and Brokerage | Markets
Author: Marshall Gittler, Head of Global FX Strategy, IronFX Global

It seems often nowadays there is only one trade in the market: risk-on or risk-off. For currency investors, it’s crucial to understand how these episodes affect each currency. There’s money to be made in understanding the different reactions.

Researchers at the IMF investigated how currencies are affected by risk aversion and came up with some solid insights into these events. They defined a bout of risk aversion as to when the Chicago Board Options Exchange Market Volatility Index (VIX) rose 10 points above its 60-day average.

IronFX Global is the award-winning leader in online trading. With 15 platforms trading over 200 instruments in forex, spot metals and CFDs on US and UK stocks and commodities, the company serves retail and institutional customers from over 180 countries in Europe, Asia, the Middle East, Africa and Latin America. With over 50 offices worldwide, and more than 1,100 employees providing support in over 45 different languages, IronFX Global clients benefit from round-the-clock coverage delivered by one of the world’s largest and most accomplished global client coverage teams. The customer-centric model combines bespoke trading functionality through its platforms with the widest suite of products to offer the best pricing, execution and liquidity.

Daily market news feed and insightful research give clients access to the best information and data to make informed trading decisions. Evidencing the leadership of IronFX Global in the worldwide online trading arena, the company has also announced its official partnership agreement with FC Barcelona, one of the most successful professional football clubs in the world. It also complies with international regulatory standards, and is authorised and regulated by the Financial Conduct Authority, ASIC, FSP, CRFIN, UCRFIN and CySEC. The company is a member of the Eurex Exchange and is also EU regulated, and a Markets in Financial Instruments Directive (MiFID) compliant firm.

This is in part due to the increased integration of global financial markets, which allows markets to get re-priced faster in reaction to global risks. More people all over the world hold stocks and bonds in other countries. Even if someone doesn’t sell their assets during periods of risk aversion, they are likely to hedge their exposure.

Also, it’s clear that all of the episodes from 2007 – except the Japanese earthquake in 2011 – have origins in concerns about excessive debt in Europe and the US. Sometimes, like with the US housing crisis in 2008, it’s private sector debt; elsewhere, like with the Greek crisis of 2010, it’s because of public sector debt.

Predicting the curve
The researchers verified that the Japanese Yen and the Swiss Franc – which have a reputation as “safe haven” currencies – do in fact appreciate relative to the US Dollar at the beginning of a risk-off period. As time went on, however, the behaviour differed. The Swiss Franc’s appreciation tended to reverse between the first and third week of the risk-off period, while the yen’s appreciation tended to last longer.

The currencies that get hit immediately are the Australian and New Zealand Dollar, among the G10 currencies. Within emerging markets, the Brazilian Real, the Mexican Pesos, and the South African Rand get hit too. In Asia, the South Korean Won, the Philippine Peso, the Indian Rupee and the Malaysian Ringgit are quick to fall. Then, other currencies tend to depreciate three-to-six weeks after the start of the risk-off episode.

Finally, some currencies have no consistent movement and don’t seem to be particularly affected by risk-avoidance. These include the Euro and the Danish Krone as well as the Thai Baht, the Icelandic Krona, and of course, the closely managed Chinese Yuan Renminb. There’s also an important difference in the movement of the currencies of the industrial countries and the developing countries.

The developed market currencies, such as the Australian and New Zealand Dollar and the Swedish Krona tend to mean revert after a few weeks. Emerging market currencies, however, tend to remain weak for longer, and some currencies, such as the Brazilian Real, the Mexican Pesos, the Philippine Peso and the South African Rand can remain weak for months afterwards. High-yielding currencies, which are often used for carry trades, tend to depreciate the fastest, fall further, and stay weak for longer, probably because it takes time before confidence comes back and people put the carry trades back on.

This difference in timing could create trading opportunities when risk avoidance sets in. After the first week one could buy a quick-rebounding currency, such as the Australian Dollar, against a slower rebounding one, such as the Mexican Pesos. The only problem would be the cost of carry, which will probably be negative in buying a developed market currency against an emerging market currency. How much of a problem that is depends on how long one has to wait for mean reversion to set in.

For me, the finding of which currencies are most stable during risk aversion periods is a key insight. Given the researchers’ finding that the Euro is not usually affected by risk aversion, I would think that using the Euro to fund trades would improve one’s risk-adjusted return. I think it’s worth paying the 15bps difference between the Euro and the Japanese Yen one-week rates (0.26 percent versus 0.09 percent) to avoid getting wiped out when a sudden bout of risk aversion causes the Japanese Yen to soar. 16.03.11: Uncertainty over impact of Japan’s earthquake