China is building the world’s largest waste-to-energy plant in response to a growing rubbish problem. While the sector is crucial for waste management, questions have been raised about its health implications 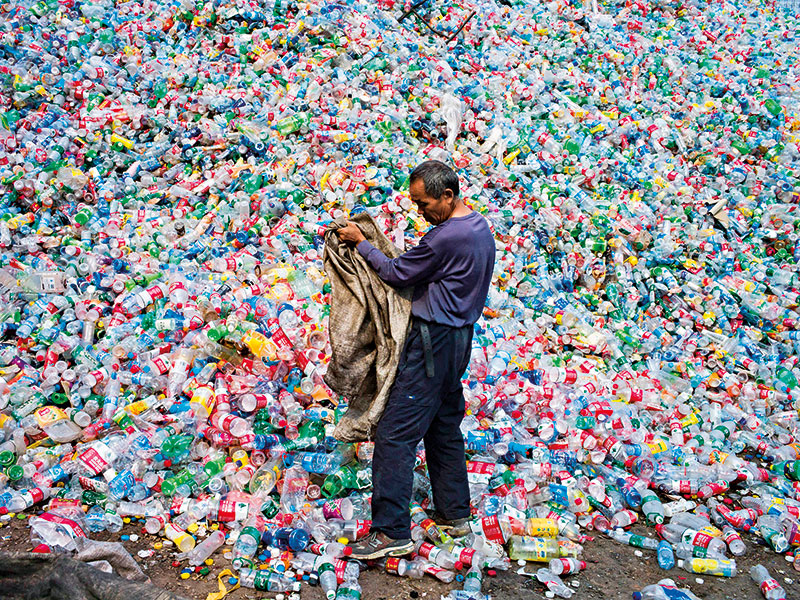 According to the World Energy Council, China generates around 300 million tonnes of rubbish each year. That figure is expected to reach half a billion tonnes by 2025
Energy | Featured | Markets
Author: Courtney Goldsmith

Every day, Shenzhen, a rapidly growing city in Southern China, produces around 15,000 tonnes of waste. As a whole, China generates around 300 million tonnes of rubbish each year, according to the World Energy Council’s (WEC) World Energy Resources 2016 report. Due to swift population growth and urbanisation, this is expected to reach half a billion tonnes a year by 2025.

To answer Shenzhen’s growing waste management challenges, China is building the world’s largest waste-to-energy (WtE) plant on the outskirts of the city. WtE plants are able to generate electricity by burning waste – a particularly useful process for non-recyclables. Once operational in 2020, the Shenzhen East WtE plant will incinerate about 5,000 tonnes of waste each day, producing 550 million kWh a year, according to the project’s architects, Schmidt Hammer Lassen.

With China being one of the world’s largest energy consumers, WtE is viewed as a solution to both the country’s waste issues and its carbon emissions – but public concerns over negative health and environmental impacts threaten to hold the industry back.

Trash to treasure
Poor management of municipal solid waste (MSW) – the waste taken from residential, industrial and commercial sources – can contribute to increased air pollution, surface-water contamination, the spread of disease and increased methane production, all of which can cause numerous environmental and health problems. Following an analysis of Asia’s WtE industry, the International Energy Agency (IEA) wrote: “For these reasons, the impetus for cities to provide effective waste management is strong.”

The WtE market makes up a small but growing proportion of the world’s waste management industry. According to the WEC, in 2015, the market was valued at around $25bn, with an average growth rate of 7.5 percent per year. This is expected to reach $36bn by 2020 – a projected increase of 44 percent in just five years.

According to Mark Sommerfeld, policy manager for the UK’s Renewable Energy Association, WtE is towards the bottom of the waste management hierarchy, suggesting authorities should first seek to prevent, reuse and recycle waste. Once these options are exhausted, WtE can be used to dispose of non-recyclables. “[WtE] provides a necessary solution for dealing with the section of waste that cannot be economically recycled, utilising it as a valuable energy resource, rather than seeing it sent to landfill,” Sommerfeld told World Finance.

WtE can produce energy in several different ways, Sommerfeld explained: “Most commonly, it is used in electricity generation, providing dispatchable low-carbon power and displacing fossil fuel use… Additionally, the heat from this process can also be captured and used within heat networks, which is now common across Europe, such as in Germany, Sweden and the Netherlands.”

Anaerobic digestion, meanwhile, is a form of WtE that uses organic waste from food or purpose-grown crops to produce biomethane to generate electricity, which can be used for the gas grid or transportation sector. Additionally, advanced conversion technologies (ACT) such as gasification and pyrolysis can produce green chemicals and renewable transport fuels. “In this way, ACT could help decarbonise difficult-to-treat sectors like aviation and shipping,” Sommerfeld said.

WtE essentially provides a solution to the global waste crisis by converting surplus waste into a source of low-carbon energy – a win-win result. However, there are concerns that when energy plants do not meet environmental regulations, they could end up damaging the surrounding ecosystem and harming public health.

Not in my backyard
China is emerging as the swiftest adopter of the technology; from 2011 to 2015, the country more than doubled its WtE capacity. The process was introduced in China in the 1980s, with the first modern plant built in Shenzhen in 1988. Since then, incineration plants quickly became an established means of waste management. China is the country with the largest installed WtE capacity in the world, with 7.3GW generated by its 339 plants in 2017, according to the IEA’s analysis. While the IEA expects the industry to continue growing – projected to reach 13GW by 2023 – the organisation warned that realising this growth would require responding to concerns raised by the public over air quality and health implications.

In Waste-to-Energy in China: Key Challenges and Opportunities, a 2015 report from the journal Energies, the research found public opposition was the industry’s biggest challenge to overcome. “With growing awareness of the need for environmental protection, public opposition has become the main obstacle to China’s WtE incineration [programme],” the report’s authors wrote.

The three main reasons cited were: opposition to the proximity of sites to residential areas, schools, lakes and rivers that provide drinking water; a lack of accountability; and a lack of public participation in decision-making.

“Due to the negative publicity of mainstream media and other factors, public opposition to the construction of MSW incineration plants has occurred in cities including Guangdong, Zhejiang and Shandong,” the report said. “Village demonstrations, student strikes and other protests affect social stability. These disturbances cause panic among members of the public.” In Shenzhen, for example, residents have been involved in a legal battle to halt the Shenzhen East project over fears pollutants will enter the air and nearby reservoir of drinking water, according to Yale Environment 360.

Hindering growth
China’s WtE plants take in a lower quality of waste due to the country’s lack of recycling programmes, meaning the waste has a higher organic composition and moisture content. This results in lower energy efficiencies and higher rates of pollutants. Where waste in Europe has an average net calorific value of eight to 11MJ/kg, China’s sits at around three to five MJ/kg. “[Improving] the quality of the waste that is fed into furnaces is crucial to achieving safe incineration”, the Energies report said.

Sommerfeld told World Finance it is important for WtE plants to have a good understanding of the nature of waste going into the site. “As such, the industry is supportive of policies that see different waste streams separated,” he said. “This also helps improve recycling rates. Avoiding contamination of waste streams as part of a modern waste management scheme is good for the whole waste industry.”

Along with promoting recycling, researchers in China have looked for ways to address this issue, including creating a new style of incineration plant that can extract more energy from waste with a high moisture content. This method also lowers dioxin levels to below EU limits. At the time of the WEC’s report in 2016, China had 28 WtE plants with this capability.

But even with these solutions, China still faces the challenge of high costs in the WtE industry. The WEC called high technology costs “one of the biggest barriers to market development”. These high costs often cause Chinese WtE plants to take the form of public-private partnerships, the Energies report found, which creates another problem for companies and results in an increased risk for fraudulent conduct. It also enables plants to avoid national emission standards or disclosing environmental monitoring information.

Even though many Chinese WtE operators claim to use advanced technologies in their environmental reports, there is little proof to back them up. In China, 16 percent of WtE incineration plants did not meet national standards in 2015, while more than three quarters did not meet EU standards. “Substandard incineration facilities and ﬂue gas puriﬁcation systems trigger a series of environmental pollution problems, and pollutants are generated in the process of incineration; in particular, emitted dioxins cause serious air pollution,” the Energies report said.

The prevalence of dioxins is one of the main reasons for public opposition to WtE, so firms must improve their standards to ensure they are not endangering public health.

Steps forward
Although China’s WtE industry faces controversy and challenges, the industry is a crucial part of the country’s response to its growing waste problem, especially as the region’s landfill are set to hit capacity in the next few years.

When built with state-of-the-art technology, WtE can deliver improved environmental and sanitary benefits when compared with landfill. For example, a WtE plant built to best-practice standards can reduce carbon emissions by up to 350kg of carbon dioxide equivalent to each tonne of waste processed.

According to Sommerfeld, WtE sites in the UK are subject to tight environmental legislation. He said: “Public Health England looked at WtE plants in 2013, with several studies also monitoring impacts since. They have concluded modern, well-managed WtE sites make only a ‘small contribution’ to local air pollution, and any health impacts, ‘if they exist, are likely to be very small and not detectable’.”

By continuing to research and develop new WtE technologies, pursue aggressive recycling programmes, create specialised regulatory agencies and guarantee public participation, China could enable its WtE plants to be safe for the environment and the surrounding population, while providing clear benefits in waste management energy generation.

As the global waste problem continues to pile up, WtE has a vital role to play. However, public health and environmental guarantees are needed to ensure incinerators aren’t doing more harm than good.