Scottish independence is merely about oil, whisky and finance

Scotland’s vote on independence was never about blood, sweat and tears, but three crucial industries: oil, whisky and finance 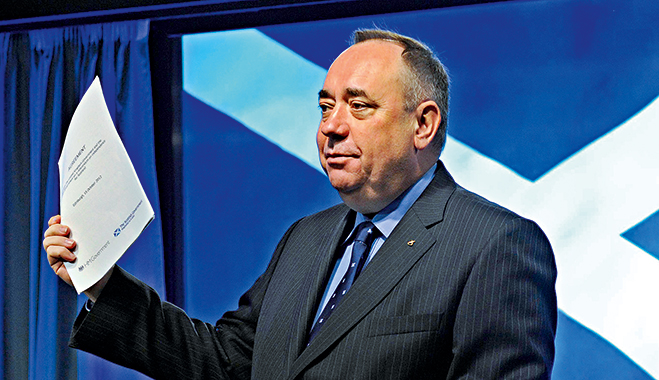 Alex Salmond holds up the signed agreement for a referendum on Scottish independence. The Scottish First Minister passionately believes the country would be better as its own state; however many businesses are concerned independence could put their finances in the red
Government policy | Infrastructure
Author: Oscar Rousseau

Scotland finds itself at one of the most important junctures in the country’s long history. Since the Act of Unions was passed in 1707, England and Scotland have formed a heterogeneous and immensely successful nation. This 307-year-old union has allowed Scotland to import and export in other parts of the UK and across Europe without having to consider border controls, trade barriers, or use a different currency.

The country’s long-term future is balancing on a knife-edge. With a healthy list of stable exports, the country’s riches are based predominantly on sales abroad. Likewise, a number of intergovernmental trade agreements have aided Scotland’s ever maturing economy in its growth and development. As the country enters a new era, however, recent tremors on both macro and micro levels could see Scotland’s economy re-adjust to almost unrecognisable proportions.

Tackling exports
Exports like oil, gas and whisky could be worth up to £100bn, according to the Scottish Government. Official figures show that in 2012, Scotland’s international exports were worth £39.8bn and £58.3bn in the rest of the UK (see Fig. 1). But should the £100bn estimate – based on recent government stats – be taken with a pinch of salt? If correct, the data points to a prosperous independent state: a country that would rank among the top 25 biggest exporters in the world, ahead of Sweden and Indonesia. These figures pre-date the vote on independence and were based on projections about the amount of oil taxes Scotland would be able to recoup as an independent nation.

The rest of Britain has up to 80 percent of its oil and gas revenues tied up in Scotland, which shows the size of the industry the country holds. Wages in Edinburgh and the oil hub Aberdeen are growing faster than most regions of the UK, and there has long been evidence to suggest that Scotland’s economy would thrive as a solo nation.

Scotland’s financial industry worth, per year

These assertions are based on how much oil and gas is left in the North Sea. Since it peaked in 1999, production has slowly declined and the Office for Budget Responsibility estimates that production can continue for another 30-40 years before the reserves dry up.

But the prosperity of Scotland’s economy does not rest exclusively on energy reserves. Issues like debt burden, workforce productivity and demography are also important. The latter is a concern because the average Glaswegian man can expect to live an average of 72.6 years, the shortest life expectancy in the UK, according to data by the World Health Organisation. Scotland’s business must have a healthy workforce if it is to become the economic powerhouse Alex Salmond envisions. It will need to encourage and support the next generation of entrepreneurs and university graduates so they can develop bright ideas that can be grown into profitable enterprise. More importantly, Scotland must strengthen trade relationships with the international community, with foreign exports key to sustaining its industry if oil and gas reserves dry up by 2054.

It’s not all about oil and gas, however (see Fig. 2). After oil, single malt whisky is the country’s most lucrative export, worth £4.3bn annually. The Scottish Whisky Association (SWA), which represents the domestic and international interests of Scottish whisky, told World Finance in the run up to the independence vote that it harboured concerns over the ‘support’ of exports if Scotland left the UK. A spokesman declined to comment on the impact independence would have on whisky exports, stating only that there were ‘potential risks’.

Scotland’s financial industry contributes £7bn annually, employs over 200,000 people and is crucial to the economy. The Scottish Financial Enterprise (SFE) represents the financial sector, and in June published a briefing paper on some of the uncertainties Scottish business could face.

This report was controversial not least because SNP leader Alex Salmond personally tried to suppress its publication – it contradicted many of his claims on Scotland’s finances. ‘If there is a ‘Yes’ vote, many important questions instantly cease to be hypothetical and become both real and urgent… [Scottish businesses] will have to consider what, if anything, can be done to address the risks and uncertainties that arise,’ read the report.

Tourist tax
Scotland’s tourism industry is at a disadvantage because of air passenger duty (APD) tax. APD is paid on international flights into London and on flights between London and Scotland; tourists flying to Scotland usually go via London so APD tax is paid twice. This is hurting the tourism industry. If Scotland were to be independent, tourism – which accounts for three percent of economic income – could give the country a significant boost.

Currency conundrum
One much-talked about issue facing Scottish industry is what currency it would use. A poll by YouGov in February showed that more than half of Britons were opposed to a currency union with an independent Scotland. UK Chancellor George Osborne has since quashed hopes of Scotland using the pound, leaving three options: using it without Britain’s consent (sterlingisation) in the same way that Panama uses the American dollar; adopting the euro; or establishing an entirely new currency.

Forming an effective single market, maintaining international competitiveness and adapting to new financial regulation are other pressing uncertainties that businesses could face. Scotland is unlikely to suffer from a flight of foreign trade, though. Its biggest international market is the US, with an estimated £3.55bn in exports in 2012. China’s growing middle class could also give the sales of luxury items – like single malt whisky and salmon – a significant boost. Big importers like America and China will be crucial to strengthening the export sector if Scotland were not quickly accepted into the EU.

If this is the case, Scotland could join the Nordic Council, according to co-founder of Biggar Economics Graeme Blackett. He told World Finance that joining the Nordic Council would ensure Scotland maintained good trade relationships. “It would help in the global exportation of Scottish goods and to develop connections with countries involved in green growth,” he said.

He added that it’s imperative the financial industry retains close ties with London banks. Scotland exported £11.2bn in financial services in 2012, and the strength of the industry is linked to its close association with the city. “A single market that continues to benefit from relative proximity,” is key to the industry, said Blackett. Business perspectives
Most Scottish businesses remained impartial in the run up to the independence vote – but not all of them stayed on the sidelines. Bus tycoon Sir Brian Souter, owner of Stagecoach, donated £100,000 to the Yes Scotland campaign for independence, while distillery William Grant and Sons donated a six-figure sum to the Better Together team. The fact that both Yes and No campaigns received donations from Scottish businesses goes someway to illustrating how divided the business community has been on the issue. It was unable to equivocally agree on what outcome would be more beneficial for businesses.

Scotland needs a individual approach to economic policy. It needs to ensure growth and demonstrate that it is capable of making its own decisions. Edinburgh provides an interesting example of the need for economic reform. Scotland’s second-biggest city has had control over a range of policy areas for 42 years thanks to the Local Government Act, and has done surprisingly little with it. Among its powers includes the ability to vary income tax by up to three pence to the pound. Its leaders have not exercised this right in over 40 years, which is hardly indicative of a country desperate to make its own decisions. Independent or not, local Scottish governments need to be given more power, and to exercise it.

Glasgow is set to receive a £1.13bn grant to help pay for infrastructure projects and employment programmes in the city. The grant is part of the City Deal policy, an initiative set up by the coalition government to give cities control over decisions that affect them. The deal will see the “creation of 28,000 jobs, generate £1.75bn annually and unlock £3.3bn of private sector investment”, said a Glasgow City Council spokesman. Westminster and Holyrood will both invest £500m in the scheme with the remaining £130m coming from local authorities in the Clyde Valley region.

The huge infrastructure fund – one of the largest City Deals in the UK – will be used to support projects like the long-awaited city centre to airport rail link, new roads and an improved bus service. The policy is one of the few nationally approved plans from the coalition government, but it may be politically motivated. Glasgow will only receive the sum of £500m from the British government if it chose to remain part of the UK, which at the time of writing was as yet undecided. Asked if the deal was a parliamentary bribe disguised as a sweetened pill, the spokesman denied it was a “gift”. Blackett was equally coy on the political undertones that have dogged the Glasgow City Deal, but emphasised £1bn isn’t enough. “Scotland needs an infrastructure fund of at least £5bn to compete internationally. And any such infrastructure package needs to be funded by Scottish investment rather than deficit funding,” he said.

The cost of change
Professor Patrick Dunleavy of the London School of Economics believes that independence would cost the Scottish taxpayer between £600m and £1.4bn over the course of a decade. His figure includes the cost of forming government bodies, an army and intelligence service, and would be equivalent of up to 1.1 percent of Scotland’s GDP. It is a high price, but Scottish nationalists would gladly take it over another 307 years with Britain. If the people of Scotland choose to leave the UK on September 18, businesses will be faced with a number of risks and uncertainties. It is fair to question if exports will be worth £100bn, or if Scotland can become one of the world’s wealthiest nations, as Graeme Blackett hopes.

The headaches over oil and gas reserves, demography, productivity and international competitiveness are all ones that will need to be addressed. Regardless of whether Scotland is independent or not, the most important thing for its industry is that a dynamic economic policy is developed to nurture growth and support exports like oil and whisky.