Nigeria cleans up its act 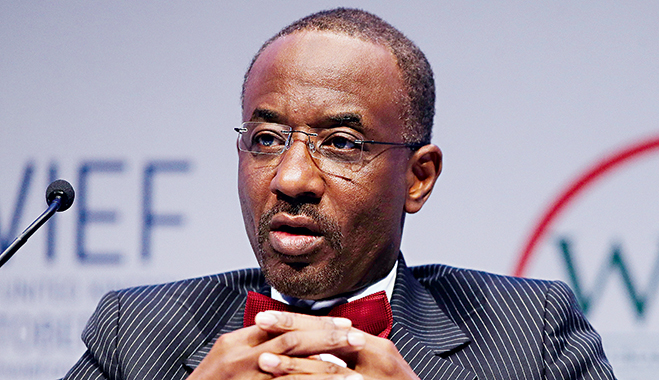 Lamido Sanusi, the former governor of the Central Bank of Nigeria. In 2013, Sanusi reported that $20bn in oil revenue was missing from the government's books for the period spanning January 2012 and July 2013
Corporate Governance | Strategy
Author: Matt Timms

The time has come around once again to call an end to poor governance and unruly corporations. With the introduction of yet another corporate governance code in another country plagued by corruption and mismanagement, the message put forward by regulatory authorities in Nigeria this time around is little – if at all – changed from previous ones. “With this Corporate Governance Rating System (CGRS), it is anticipated that there would be an improvement in the overall perception of capital markets and business practices”, said Oscar Onyema, CEO of the Nigerian Stock Exchange (NSE), speaking on the country’s new mandatory rating system.

Following in the footsteps of the Shanghai, Mexico, Johannesburg, Korea, Istanbul, Lima, Borsa Italiana and Brazil BM&FBOVESPA stock exchanges, the NSE marks another major name in a long list of national institutions looking to introduce corporate governance indices. Crucially though, the NSE development is perhaps the most significant of the lot so far, taking into account the country’s close associations with corruption; (see corruption perception index) and by choosing to tackle the issue head on, regulators can begin to answer the questions asked of them concerning the issue.

“It is expected that companies will enjoy tangible business advantages from risk-oriented and/or ethically sensitive business partners and investors. In addition, competitors would be challenged to establish the same level of good governance by setting standards of excellence”, says Onyema. “Companies would not only set themselves apart from their peers, but also contribute to improving the climate for doing business in Nigeria”, as, indeed, they most probably will.

But the rules are far from an all-encompassing fix to the all-pervading issue of corruption, nor do they strike at the heart of the problem. Yet the measures – however limited they be – mark an important step in a continued attempt by regulatory authorities to disassociate some of the country’s leading names from the issues stifling Africa’s most populous country from realising its true potential.

Nigeria’s reputation
As a result, Nigeria is today synonymous with corruption, and the casual observer need only look so far as the oil sector for an understanding of what the issue has inflicted on state finances – not to mention Nigeria’s reputational standing. Though the country is rich in oil (see Fig. 1), widespread corruption means the industry – and to a lesser extent the economy – is haemorrhaging finances, and poor governance is turning the extractive industries into a risk not worth taking for investors worth their salt.

At the beginning of 2013, the soon-to-be-suspended central bank Governor Lamido Sanusi said that $20bn in oil revenue was missing from the government’s books for the period spanning January 2012 and July 2013; allegations that President Goodluck Jonathan called “patently untrue”. However, the seriousness with which the public greeted the allegations shows what little trust is shown to the oil sector – in particular with regards to state-run Nigeria National Petroleum Corporation (NNPC).

Worst of all is that the allegations are far from the first of their kind. Another confidential report seen by Reuters in 2012, for example, revealed that mismanagement and improper conduct had cost the country $35bn in lost revenue over the 10 year period – an amount that eclipsed the year’s government spending as a whole.

Among the items included in the document was one that showed the NNPC had made $86.6bn throughout the period, chiefly by using overly generous exchange rates in dealing with the government. Here, the contents of the 146-page report showed in grizzly detail the self-serving nature of the country’s elite, and served only to exasperate the country’s reputation for poor governance.

To paint a clearer picture of the issue, one Gallup survey conducted in 2012 showed that 94 percent of Nigerians agreed with the phrase “yes, corruption is widespread”, therein offering a damning indictment of the country’s shortcomings. The findings were so bad even that the perceived level of corruption is rivalled only by Kenya in last place, and without taking steps to improve transparency the figures will rank among the world’s worst far into the future.

Looking at Transparency International’s data for 2013, the figures show that 73 percent of the citizens included in the sample felt that corruption in the country had increased in the years from 2007 to 2010, and that 40 percent believed government efforts to fight corruption were ineffective. With a score of only 25 out of 100 in the organisation’s Corruption Perceptions Index, Nigeria is ranked 144 of 177 nations surveyed worldwide. What’s more, the WEFs Global Competitiveness Index puts Nigeria at 127 of 144 nations worldwide.

Creating a starting point
Taking into account its less-than-stellar reputation, Nigeria’s new CGRS is a crucial part of what will surely prove to be a marathon task in quashing the country’s close ties with corruption. “The rating system is based on a holistic multi-stakeholder approach that uses a diverse information collection and verification approach, which relies not only on self-assessments of companies but also on experiences of stakeholders and experts”, says Soji Apampa, Executive Director of the Convention on Business Integrity (CBi). “It is envisioned to be more transparent on rating procedures and rating governance than other Corporate Governance indices.”

The mandatory rating system will see listed companies evaluated on the quality of corporate integrity, corporate compliance, and an understanding of fiduciary responsibilities by directors and corporate reputation. From this, it can be said that there exists a sustained push in Nigeria to improve corporate governance, and so, protect stakeholder interests while boosting investor confidence.

“Many become induced in their thinking that this in large part is the way things are done in Nigeria and corruption has become institutionalised”, says Apampa. “The CGRS seeks to raise the general levels of corporate governance in Nigeria, by strengthening the efficacy of corporate governance rules through a market mechanism. It helps listed companies resist the pressure to be corrupt through the incentive system put in place to encourage them to “do well” by “doing right”.

“Well-governed companies stand to attract greater levels of investment and the poorly governed ones are more likely to be shunned”, adds Apampa. However, critics have highlighted the failure of like-minded policies in years passed, and seen little reason why this one should be any different, after codes like it have yielded very little in the way of results and come at great expense.

Along with a number of industry-specific policies introduced over the years, the Companies and Allied Matters Act, Investment and Securities Act and the Securities Exchange Commission Corporate Governance Code in 2004, 2007 and 2011 respectively have each failed to overturn negative associations.

More than one side to consider
Adegbite’s comments touch on an often-neglected factor in the country’s fight against poor governance, and recognises the part played by smaller enterprise in the wider economy, and the extent by which SMEs are often excluded from the discussion on corporate governance. As recently as 2002, SMEs accounted for 98 percent of all manufacturing businesses and over three quarters of the workforce, and while the share has fallen since, the fact remains that these businesses are the engine room of what is today Africa’s largest economy. Taken from the example set by larger enterprises, the common assumption among SMEs is that good governance is a costly endeavour, and for as long as large and listed companies are unwilling to take action, the opinion will stay the same, and so, corruption will continue to inhibit the country’s development.

Still, there is cause for optimism moving forwards, and Nigeria – for all its flaws – is among the continent’s leading names in making clear the benefits of good governance. “Alongside South Africa, Nigeria is leading the debate on corporate governance in Africa, in terms of practice, policy and research”, says Adegbite. “So, despite the daunting challenges, a lot can be learnt by neighbouring African countries from the Nigerian experience. But, first – Africa’s biggest economy must lay a worthy example.”

Looking at the country’s track record, it’s easy to assume that the new CGRS will have little bearing on the country’s close associations with corruption. “The rating agencies that submit Nigeria could have been rated better had it made more progress with reforms and with dealing with corruption”, says Apampa. “Its inability to deal decisively with corruption is underpinned by factors within its political economy, which seem to constrain the behaviour of both companies and the political elites. So, to me, poor governance is a consequence of these constraints that the elites believe they are bound by and non-inclusive economic development is the ultimate result.”

However, judging by the sheer number of steps taken to clamp down on poor governance, it’s fair to say that regulatory authorities are legitimately concerned about the issue at hand. And should listed firms comply with the new code, the example set by leading names will likely filter down to smaller enterprises and have a measurable influence on the country’s development.