American economist Paul Volcker gave attendees at last year’s International Bar Association annual conference a unique insight into finance, corruption, and the rule of law. The following is an edited transcript of his keynote address 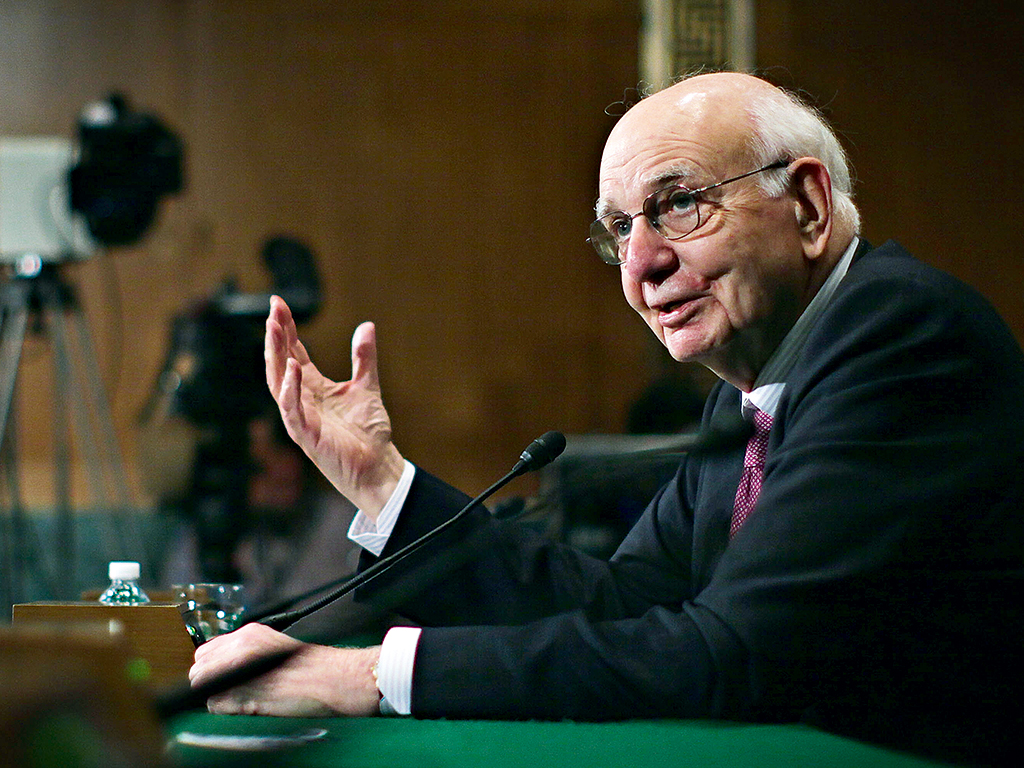 “I wondered about how a semi-retired financial guy like me is equipped to keynote an expert panel on corruption and the rule of law, but then, as I thought of the developments in the financial world recently, maybe it’s obvious that I have a certain expertise.

For a long time I have been deeply concerned about the corrosive effects of corruption, both upon nations struggling to emerge economically, and upon the effectiveness of key financial institutions, and I include in that the United Nations itself.

These days, I don’t have to look elsewhere for evidence of the debilitating impact of corruption, perceived and real, in eroding trust in government processes. It’s also true with other relatively rich economies, presumably long imbued with the importance of the rule of law.

Vision, execution, hallucination
I recently undertook the initiative for a new institute that’s come to be known as the Volcker Alliance. The central idea is to focus attention by practitioners, academics, the political class and public at large on the need for effective and efficient ‘implementation’ of public policies. I emphasise the word ‘implementation’. There’s plenty of debate about what governments ought to do on grand policy, but the whole subject of management and administration seems to be in disarray and neglected. I ran across an apt quotation from Thomas Edison. It says ‘vision without execution is a hallucination’. Too often, it shows up in poor performance; it feeds the sense that government can’t be trusted.

At the first meeting of the Alliance, the conviction was strongly expressed that corruption had become the central issue of governance. It called for priority attention. I readily agreed, so it was natural to place that issue front and centre in a conference that the Alliance convened in Salzburg. We had some 40 attendees, drawn from government, universities and international institutions. Collectively, those attending reflected the concerns of both well developed and emerging economies in the effective implementation of public policies.

Yet, somewhat to my surprise, there were also strong warnings against committing investment of our limited financial and intellectual resources to the fight against corruption. It wasn’t because the issue was considered unimportant – to the contrary. The sense was widely shared that corruption was becoming more intractable, more pervasive, not less.

Breakdown in trust
You are no doubt familiar with the estimates that corruption might sometimes add 30 percent or more to the cost of contracts and implementing internationally financed projects. There is evidence that funds, for a significant number of international and national assistance programmes, are simply wasted. The adverse consequences are not simply the direct financial losses and inefficiencies involved, but a breakdown in the sense of trust essential to effective democratic, or for that matter, any government.

It’s worth noting that the two nations with the largest populations located side-by-side in Asia, one a turbulent democracy, the other a one-party state, are both riled by corruption. In both cases, it threatens their ability to sustain rapid growth as well as political stability.

So it was not the relevance, but the size of the challenge that seemed forbidding. The extent and nature of the problem, deeply embedded in national habits, often supported by local business and financial interests, in some cases tied into the production and distribution of drugs. It is of course these considerations that raise questions about the rule of law. Corruption cannot be combated successfully without a strong commitment to the rule of law. That’s a matter of prime significance for lawyers in their professional organisations, not for a tiny new institute, however ambitious, with a number of more manageable priorities.

Weak rule of law and perceived corruption is closely associated with stunted economic development, presents seemingly pervasive obstacles to an escape from poverty, and is accompanied by an absence of human rights. More positively, with a tradition of the rule of law, with relative freedom from corruption, confidence in government booms. So I’m not ready for the Volcker Alliance to abdicate. The relevant question for us is identifying, at the margin, where we can gain a better leverage.

Defining corruption
Are our schools of public policy paying attention to the need for education and training in corruption prevention? I might ask the same of our distinguished schools of law: are there promising areas for research that need support? Do reform-minded governments have access to appropriate frameworks and well-tested procedures for preventing and attacking corruption?

As I thought about this panel and what to say, I realised we were faced with some semantic and conceptual confusion. I took refuge in my dictionaries. I found ‘corruption’ is consistently defined as ‘the result of corrupt acts’. It didn’t help me very much. Corrupt actions are principally defined as bribing public officials, but isn’t it more sweeping than that? The definitions then do proceed with words such as ‘immorality’, ‘dishonesty’, ‘lack
of integrity’.

In contrast, ‘rule of law’ – unlike ‘rule of thumb’ – is not defined in my dictionaries. But the word ‘rule’ alone does seem to come close, implying a governing principle embodied in legislation or observed in practice. We add the concepts of consistency and transparency and we come close to the approaches formalised in both the OECD Anti-Bribery Convention, and more broadly, the UN Convention against Corruption.

I have great respect for the continuing efforts of the OECD over more than a decade to develop and enforce national efforts; to outlaw bribery of foreign public officials. Importantly in that case, there are provisions for the act of monitoring of both legislation and enforcement in the 40 signatory nations. That convention follows closely the precedent of the American Foreign Corrupt Practices Act, which became law more than a quarter of a century ago.

The UN Convention is more recent, entering into force in 2005. It now has, nominally anyway, 168 countries as partners. It is, as written, the most comprehensive approach, and extends way beyond criminalising bribery to other corrupt actions and money laundering. Extensive record-keeping and broad codes of conduct for civil servants are required, indeed in requiring honourable and proper performance of public functions, I quote, including fair and transparent government procurement systems, the convention comes close to defining the essence of the rule of law.

Avoiding complicity
So where in practice do we stand? At the least, with reasonable clarity, bribery of foreign officials has been outlawed in most countries. The complementary efforts of the World Bank, now increasingly joined by other multi-national institutions, has improved vigilance over the use of their own resources. One result is evident in identification of increased numbers of banks’ contractors engaged in corrupt activity.

A broader change in attitudes has been highlighted by the Siemens case of large-scale bribery, leading not only to huge fines, but to a reversal of the former leniency of the German government towards bribing foreign officials by its companies. But can any of us feel satisfied that such examples are sufficient. They only touch the surface of illicit behaviour. There are many important countries that, in my personal experience, don’t even seem to try. We had the Siemens case in Germany, we had on the other hand, the rather infamous case in Britain, where there were allegations that huge bribes were paid to assure large contracts in a foreign country, and they were not pursued to a definitive conclusion because it was stated in the end there were more important things than the rule of law.

I am certain those international agreements and activities, together with the sporadic evidence of a more aggressive approach by some individual countries, have by no means relieved the sense of frustration and alarm with which I began these remarks. In my own experience, with respect to both the inquiry I chaired into the administration of the Oil for Food programme at the UN, and my subsequent review of World Bank practices, I have been exposed to deep-seated resistance to effective action, even by those most affected international institutions and member nations. It was only in the mid-90s that a brave World Bank president took the position that, and I quote, corruption is a cancer on development. He said that his institution could no longer dodge the issue.

The World Bank and the OECD, both under strong leadership, have come a long way from the old attitude that corruption is ‘not our business’. There is frank recognition that the combination of a weak rule of law and corruption is not only economically debilitating, but threatening the political health of both new and old democracies.

I do not exclude the United States. We think of ourselves as exemplars of the rule of law. We are certainly world champions in the extent of legislation and regulation governing bribery, conflicts of interest, procurement procedures, campaign financing, protection of human rights and most of all, transparency. All of these are ingredients of what some think of as the rule of law. But we still face the sad fact that in the United States itself, only a quarter of Americans believe that corruption is not widespread in our country.

My feeling is that the impression of serious corruption has increased further, a reflection largely of the concern that campaign financing has come to gravely distort the political process.

Should we be satisfied that we live with a really effective rule of law, when the perceived need for heavy campaign spending has come to dominate our political process? We let those financing practices infringe in a very basic way upon the rule of law, with its sense of even-handedness and openness. Does it not breed behaviour that is accomplished by any reasonable definition of corruption?

I made the point earlier that the successful attack on corruption depends upon a strong sense of rule of law, but it’s equally true that widespread corruption makes strong rule of law an impossible dream. But here I am, addressing a prestigious group of lawyers: you carry the full weight of a long respected and honoured tradition. If we fail to maintain an effective rule of law and a strong defence against corruption, two sides of the same coin, then you can hardly escape complicity.”

This year’s IBA Annual Conference will take place in Tokyo, from 19-24 October, and will begin with a keynote address from Japanese Prime Minister Shinzo Abe.