Managing the complexities of global trade 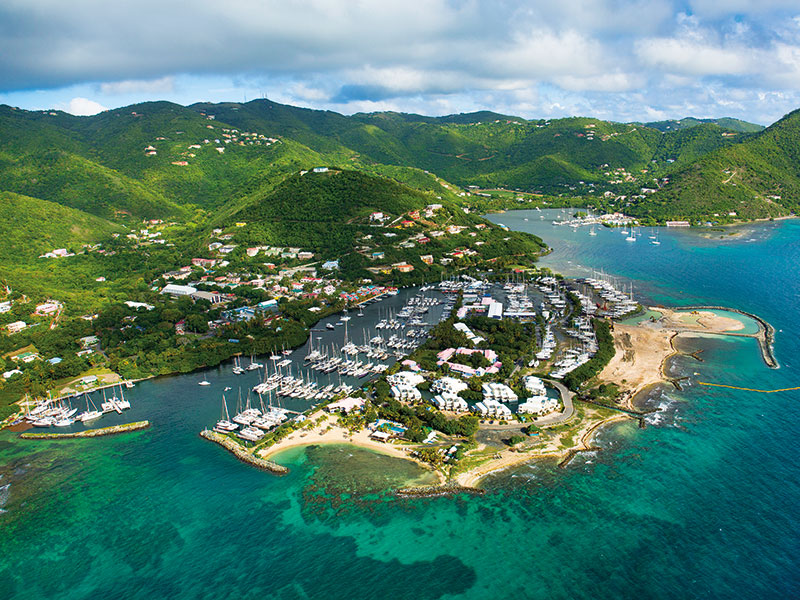 Aside from forging a reputation as a centre of excellence for international arbitration, the BVI has come to the fore through the establishment of trusts for asset protection and succession planning
Featured | Investment Management | Wealth Management
Author: Simon Gray, Head of Business Development and Marketing, BVI Finance

We live in a truly global society where cross-border trade is the norm and most forward-thinking companies seek to grow their business internationally. According to the World Trade Organisation, global merchandise exports increased by a factor of 250 between 1948 and 2016 (see Fig 1), with recent advances in technology accelerating growth and creating what is fondly referred to as the ‘global village’.

But while globalisation has fuelled international business growth, the size and complexity of some transactions mean that it is not always easy to get deals over the line. In fact, third-party intervention can be required to find a mutually agreeable solution for all involved. International arbitration is the accepted mechanism for dispute resolution on commercial agreements, enabling companies to avoid national courts in favour of a neutral, predetermined decision-maker. International arbitration allows those involved to establish in advance how matters will be addressed in the event of a dispute arising. Details including the choice of arbitral organisation, location, language used, number and selection of arbitrators, prevailing law, and procedures to be followed can all be resolved preemptively.

The most contentious issue is often the location of arbitration proceedings, with independent venues sought out to avoid any potential bias or conflict of interest. In the not-too-distant past, very few jurisdictions had the necessary infrastructure to accommodate international arbitration, with activity traditionally centred in North America and Western Europe. Today, though, international finance centres are gaining popularity as nerve centres for the resolution of commercial disputes.

While globalisation has fuelled international business growth, the size and complexity of some transactions mean that it is not always easy to get deals over the line

The law of the land
The British Virgin Islands’ (BVI’s) arbitration legislation dates back to the introduction of its Arbitration Ordinance in 1976. As the BVI continued to develop as a major arbitration hub, the need to modernise its legislation became apparent, resulting in the establishment of a new Arbitration Act in 2013. The current statute is one of the most progressive globally and its adaptability, which enables parties to tailor it to their needs, makes it universally appealing to international lawyers.

The culmination of several other developments led to the launch of the BVI’s International Arbitration Centre in November 2016, making it the first jurisdiction in the Caribbean to have established both an arbitral institution and a dedicated centre, as well as to boast legislation modelled after the UN Commission on International Trade Law.

While all of these factors make a compelling case for choosing the BVI as a destination for international arbitration, what distinguishes it from its peers is the flexibility of its statutes. This includes the ability to opt in or out of certain provisions, such as whether a court has jurisdiction to consider an appeal against an award, challenge against an award on the grounds of serious irregularity or determine a point of law arising in the arbitration.

The BVI also enables those involved in an arbitration agreement to choose a governing law that is distinct from the seat of arbitration, recognising that the hearing venue, applicable rules and courts in which applications may be brought are a selection of matters that may relate to separate jurisdictions. This flexibility can be particularly useful when enforcing arbitral awards, reducing the time and complexity involved for all.

What’s more, other jurisdictions can be selected as the seat of arbitration – allowing a third-party jurisdiction to be used as the governing law of the contract – but the arbitration itself has to be heard in the BVI to ensure impartiality. This option provides a neutral venue and an experienced commercial court to assist with interim matters in aid of the arbitration, while also ensuring any award can be quickly and easily enforced in the jurisdiction in question. Trust the process
Aside from forging a reputation as a centre of excellence for international arbitration, the BVI has come to the fore through the establishment of trusts for asset protection and succession planning purposes. Having a legal system rooted in English common law also reassures individuals about the integrity and effectiveness of its procedures, including the numerous innovations that are unique to the BVI.

Chief among them is the Virgin Islands Special Trusts Act (VISTA), which was established in 2003 and can be a valuable tool in effective succession planning. VISTA allows the business owner to place the company’s shares into a trust structure, thereby creating a mechanism for the orderly succession of ownership of the business following the owner’s death or incapacity. Crucially, it provides this structure without placing the day-to-day management of the company in the hands of a trustee, who may not have the specific knowledge and experience to run it.

As such, the directors of the business continue to make key decisions relating to the company, while the BVI trustee holds the shares of the company in trust. What’s more, VISTA can be revoked – a feature that often gives the person settling the trust a measure of comfort. The settlor is also able to set out ‘permitted grounds of complaint’ and ‘office of director rules’, which determine how and under what circumstances the trustee can intervene in the company’s affairs and request information from the directors regarding the management and financial situation of the underlying company’s assets.

A reliable partner
BVI trusts are recognised internationally for helping high-net-worth families and entrepreneurs protect their assets, guard against political uncertainty, maintain privacy and ensure the continuity and orderly succession of their business and financial interests from one generation to the next. In the event of a dispute, the specialist BVI Commercial Court is well equipped to handle trust matters, while the Court of Appeal of the Eastern Caribbean Supreme Court is on hand to help if necessary. Parties also have ultimate recourse to the Privy Council of the UK if a final appeal is required. The BVI trust sector is highly sophisticated, with a large number of experienced, technically skilled professional firms and trust practitioners operating within the corporate, legal, tax and accounting fields. There are a whole host of additional benefits that underpin the popularity of BVI trusts too, including the fact they are flexible, cost-effective and can be used for both charitable and non-charitable purposes. Other key highlights include the confidentiality and privacy of the trust’s settlor and beneficiaries, and the multi-generation duration of trusts, which protects assets from creditors and forced heirship. As such, BVI trusts are useful for succession purposes, as they avoid the associated costs of the probate process, provide tax and fiscal neutrality, and reduce exposure to additional levies.

Individuals can choose from several trust structures dependent on their specific circumstances, from discretionary trusts – which provide maximum flexibility and give the trustee broad scope in terms of the distribution of income and capital to beneficiaries – through to fixed-interest funds that limit the control of the trustee. Accumulation and maintenance trusts are also useful if settlors intend to preserve assets and accrue value in the trust capital for beneficiaries, such as children or grandchildren. The trust capital and/or the income will generally be used over time to ensure the education and maintenance of beneficiaries up to a specified age.

Core to the BVI’s success across both international arbitration and the provision of trusts is its ability to constantly adapt to changes in the global financial services industry. It has developed and implemented the highest international standards to maintain the country’s status as a top-tier hub, creating flexible vehicles that can operate in different countries and offering valuable ancillary services at a reasonable cost. Standing still isn’t an option in today’s fast-paced financial services industry; as a digital innovator deploying cutting-edge technology, the BVI ensures its clients have the latest solutions to meet their needs.

The future of global trade is uncertain, but while the direction of international financial flows will undoubtedly alter and evolve with time, the volume of such transactions is unlikely to decrease. International finance centres like the BVI help mitigate the ambiguity and potential risks involved in engaging in global trade, offering a neutral, independent platform that allows organisations to confidently grow and nurture their businesses across borders.