The city of Cyberjaya has been identified as Malaysia’s tech-hub for quite sometime, but recent developments will take the city to the next level, writes Emily Cheng of Osk Property Holdings 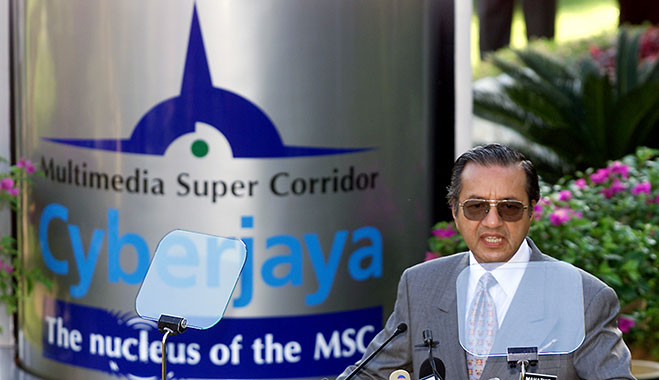 Launched in 1997 by Malaysia’s fourth Prime Minister, Tun Dr Mahathir Mohamad, Cyberjaya is a well-planned, intelligent city, located midway between Kuala Lumpur city centre and Kuala Lumpur International Airport (KLIA). Hailed as the ‘Silicon Valley of Malaysia’, Cyberjaya is the first hub of the Multimedia Super Corridor (MSC-Malaysia) – the area the government has identified as the new growth engine for the IT industry in the country.

Today, the city has become the destination of choice for more than 500 multinational companies. It possesses cutting-edge amenities and facilities and is easily accessible via major highways. With a total land area of 7,000 acres, Cyberjaya will be developed into a self-sustainable township with world-class ICT infrastructure, low-density urban enterprise and state-of-the-art commercial, residential and institutional developments.

Across the 7,000 acres of land in Cyberjaya, 48 percent will be reserved for public amenities and greenery, such as public parks, lakes and the beautiful rainforest in Malaysia (see Fig. 1). Looking into this, developers took heed in planning and developing a master plan to meet the Green Building Index standard. Developers are leaving ample space for green facilities and landscape in their developments, offering residents the nature-inspired lifestyle that they have always desired.

Mirage by the lake at Cyberjaya is built with this green concept in mind. The project consists of a mix of luxurious villas and condominiums, with natural water corridors and lush greenery forming a truly environmental landscape. Complemented by 3.5 acres of land for landscaping, the 12.14-acre development’s unique circular layout is designed around three central lakes, affording prime water frontages and picturesque views to each home.

A global hub
Cyberjaya, has an excellent fibre optic network infrastructure, to be fully wired with high-speed broadband at 100mb per second. This is in line with Malaysia’s aspiration to become a hub for data services and is expcted to contribute MYR2.4bn to the country’s revenue by 2020. According to the New Straits Times, Cyberjaya’s unique and independent high-speed carrier network has influenced many prominent ICT industry players to base their operations in the city.

Its competitiveness as a global ICT hub has made Cyberjaya one of the top destinations for business support services and outsourcing in the world. It is home to more than 38 multinational corporations (MNCs) including HSBC, DHL, Shell, Motorola, OCBC, IBM, Ericsson, BMW and Fujitsu, as well as another 800 technology-oriented companies.

With well-designed residential projects in place, it is definitely an area that will grow in years to come

Cyberjaya is not only fast becoming the destination of choice for MNCs, but it also has the ambition to be among the top 20 most liveable cities in the world by 2020. Many call the city home, with popular residential developments such as Perdana Lakeview West, Perdana Lakeview East and Persiaran Bestari proving popular, and offering an array of accomodation.

Pan’gaea is a 16-acre project, which houses retail offices, residences, a shopping mall and a hotel. Drawing from the inspiration the ancient Pangaea, the development envisions a ‘world in one place’ concept where the diversities of modern living are brought together under one common freehold address. The aims of the project are to establish the Pan’gaea as a landmark within the city, and to create a unique and vibrant public forum for entertainment, retail and entrepreneurial activities, while creating and maintaining it as a highly desirable place to live.

With well-designed residential projects in place, it is definitely an area that will grow in years to come. This will further create job opportunities due to the vast stretches of land available for high-impact companies to expand their business in the city. In the next five years, most of the major developments will be complemented by recreational parks, entertainment centres and other amenities in anticipation of increasing population. According to the master developer of Cyberjaya, the population for this township is predicted to reach 100,000 by 2016, from the current 70,000.

State-of-the-art security
Cyberjaya is eminent for its gateless community. The development and architecture in the city blends into the western style of living, which many locals and foreign professionals have affirmed as their preference. These residences have strict security enforcement to ensure a safe and guarded community under the watchful eyes of the security team.

In addition, Cyberjaya has a natural secure surrounding due to its peaceful environment. Compared to the crime rates in Klang Valley, Cyberjaya is enjoying increasing security, and the township is more than halfway towards achieving its target of being a safe city with a crime rate of zero.

This is largely due to the fully integrated Malaysian Emergency Response System (MERS) 999 CCTV system. Launched in 2009, Cyberjaya’s CCTV system is the only system in the country that has been linked to the MYR10m MERS 999. The system is designed to be able to operate round the clock, in all types of weather conditions and capture quality daytime and night-time images, utilising Cyberjaya’s fibreoptic backbone system. The CCTV operation, part of the Cyberjaya Citywide Surveillance System, boasts 30 cameras across the city, with a high traffic volume and large population.

According to Cyberview, six parties were involved in the planning and design of the MERS 999 CCTV system in Cyberjaya – Cyberview itself, Telekom Malaysia, the Royal Malaysian Police, Sepang Municipal Council, Tenaga Nasional Berhad and Multimedia Development Corporation.

The objectives of the installation of the system continue to be to ensure the safety of the community at large, which consists of locals and many foreigners, as well as to enhance the township management services of the Cyberjaya Flagship Zone.

In recent years, the steady growth of the student population has been led by top local and international learning institutions. These include international-standard universities such as Multimedia University (MMU), Limkokwing University of Creative Technology (LUCT), University Malaysia of Computer Science and Engineering, Cyberjaya University College of Medical Science, Cyberjaya Putra College and Kirkby International College. The presence of international universities and multinational corporations encourage good tenants and foreign purchasers for properties in Cyberjaya.

The current universities, colleges and schools in Cyberjaya attracted a large number of foreign students, which created an international environment, allowing for more exposure and growth. The latest statistics show that the student population has reached 25,000 in the city and is on the rise. Of these students, 40 percent are foreign students from 80 countries worldwide.

Ease of accessibility
Cyberjaya is an ideal investment location with excellent accessibility and connectivity. It is well served by major access roads and a series of well-developed public transportation systems. Even for professionals working outside Cyberjaya, it is possible to get to work on time with highways such as the Maju Expressway (MEX), B15 Expressway and the North-South Expresswway Central Link (ELITE Highway) enabling you to reach key points like the Kuala Lumpar city centre in 20 minutes. Frequent flyers would also be happy to hear that it takes no time at all to reach KLIA and KLIA 2, which are only a mere 28km away. If your schedule is packed with business trips and you would like a place to unwind, rest your head and be assured you won’t miss that important flight, then this is the place to do just that.

Cyberjaya is an ideal investment location with excellent accessibility and connectivity

Cyberjaya is surrounded by highly populated areas such as Putrajaya (Federal Administrative Centre of Malaysia), Puchong, Kajaang, Bangi and the whole southern corridor of Klang Valley. The increased offerings of activities, amenities and accessibility are expected to attract crowds from most of the neighbouring areas. Project such as Pan’gaea are located in the heart of Cyberjaya. Gearing to become one of the biggest mixed developments in Cyberjaya, Pan’gaea offers home owners and businessmen the chance to park themselves at a premium address. A fancy, modern and stylish living lifestyle is something that comes naturally.

With the world-class IT infrastructure, low-density urban enterprise, as well as the future plans of many state-of-the-art residential, commercial, business and institutional developments, it will continue to add value to the townhsip as an ideal place to live, study, work and play.