Emerged in recent years as the Middle East’s most stable, the UAE is a secure and attractive destination for finance and the go to place for regional banking services 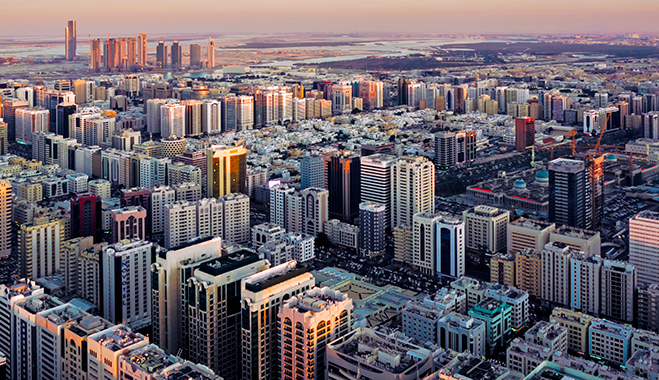 A view over Abu Dhabi, where Union National Bank is based. The bank strongly believes that investments in the UAE's non-oil sectors are essential to ensure a sustainable future for the region's economies
Banking
Interview with: Mohammad Nasr Abdeen, CEO, Union National Bank

Years of stunning growth from its vast resources of oil have led to the UAE to become the extravagant bridge between east and west. With dazzling cities like Dubai and Abu Dhabi, the UAE has built itself a number of destinations that are becoming destinations for entertainment, financial and business for the modern world. But while the huge quantities of oil are continuing to boost the economies of the region, it is important that the UAE invests into areas that will be sustainable once the oil has dried up.

The banking sector in the UAE has seen particular attention in recent years, with growth bouncing back considerably since the impact of the global financial crisis after 2008. As a result, a number of banking institutions have emerged to offer a range of financial services that are helping to fuel the region’s economic growth, while experiencing a healthy degree of competition. One such bank is Abu Dhabi-based Union National Bank (UNB), which has enjoyed consistent success over the past decade and is set to expand further in the coming years as well. World Finance spoke to the bank’s CEO Mohammad Nasr Abdeen about the UAE’s unique offering to banking clients, and why UNB has been so successful.

The UAE has seen rapid expansion in the non-oil sector over the past two years. How has the growth been experienced in the banking sector?
The UAE is a major international tourist and business centre, as well as one of the most modern, stable and safe countries in the world. Growth in the non-oil sector accelerated in 2013 and the strong momentum has carried through the first half of 2014 as well. According to reports by the IMF, while growth in oil production moderated, public projects in Abu Dhabi and buoyant growth in Dubai’s service sectors continued to underpin growth, which reached 5.2 percent in 2013. Economic growth is expected at 4.8 percent in 2014 and about 4.5 percent in coming years, supported by a number of megaprojects announced over the past 18 months and the successful bid for the World Expo 2020.

The UAE is continuing to benefit from its safe-haven status in the region. Government spending in Abu Dhabi and Dubai will help to sustain non-oil growth throughout the period from 2014 to 2018, including the construction and manufacturing sectors. Services growth will also be buoyant, helped by trends in private consumption and strong dynamics in the trade, transport and tourism sectors. Further expansion of the country’s airlines will continue to boost these sectors. Tourism is expected to continue to grow as the UAE targets new markets and introduces new product offerings.

The outlook for the UAE’s banking sector remains positive, in line with the country’s economy and as growth prospects have been improved by the relatively smooth restructuring of much of Dubai’s debt. The main drag on growth in 2014 – the debt-funding cliff – is easing as restructuring has thus far occurred smoothly.

Bank lending in the UAE grew 7.3 percent year on year in 2013, according to data from the UAE Central Bank. The UAE’s aggregate bank deposits also rose 9.5 percent year on year in December 2013. The outlook for the UAE banks in 2014 remains favourable, supported by robust non-hydrocarbon growth, low interest rates and a further increase in real estate prices. The Institute of International Finance (IIF) has forecast 11 percent growth in loans and deposits each, with provisions remaining stable and NPLs declining further to 7.4 percent for 2014.

What are the opportunities emerging for banking institutions like UNB?
In the wake of the improving economic landscape in the UAE, UNB is witnessing tremendous growth opportunities in various spheres of economic activities. UNB enjoys strong credit ratings, stable profitability, sound liquidity and a robust capital adequacy position well above the mandated requirement. UNB has extensive branch coverage in the UAE and has a diversified revenue stream with presence in the areas of retail banking, corporate banking, Islamic banking, treasury, private banking and SME’s.

Given the competitive banking landscape in the UAE, the challenge is to grow business volumes while ensuring that pricing pressures do not adversely impact the bottom-line on an overall basis. However, the considerable branch network along with alternative delivery channels, on going investments in technology and infrastructure, innovative products offerings and focus on quality services has well positioned the bank to effectively compete in the market place.

As part of the bank’s vision, to be a key player in the region UNB Group expanded its branch network by adding 16 new branches across the region in the last year, thereby enhancing its footprint to 110 branches and offices spread across the five countries – the UAE, China, Egypt, Kuwait and Qatar – where it operates. Under the improved market scenario the bank’s focus is to enhance and diversify its asset base across all the important economic sectors.

The banking sector in the UAE is extremely competitive. What makes UNB stand out?
It is known for its prudent lending policy and does not focus on one specific economic sector as a key driver for growth, but rather ensures that there is an appropriate diversification of exposure to various economic sectors that make up the local economy. The relationship between risk and return is continually assessed for each sector and business line, keeping with the prevailing economic conditions.

All this is not possible in a service-oriented industry without paying close attention to the well-being of our staff, which in turn drives customer satisfaction through a combination of world class processes, procedures and superior delivery channels powered by cutting edge technology.

What are the benefits and limitations of being an Islamic banking institution?
The market for Islamic banking has grown rapidly over the past few years and this robust growth is expected to continue in coming years with rich potential in the region. The Islamic banking sector has a bright future in the UAE as it has been playing a major role in financing infrastructure projects, residential properties and corporate expansion. However, Islamic banking is fiercely competitive in the country with increasing numbers of Islamic financial services institutions in the market place. Therefore in order to grow asset base and remain competitive, it is imperative to remain focused on innovative product development, distribution and operational excellence within Islamic tenets.

UNB is predominantly a conventional bank with an Islamic window. Its total assets under Islamic banking business were $1.85bn in June this year, representing 7.4 percent of the total assets of the group. The bank offers a wide range of Islamic products and services through its Islamic Banking Group and also its subsidiary Al Wifaq Finance Company, catering to the needs of both corporate and retail banking clientele. The Islamic banking segment has remained profitable with tremendous growth opportunities.

What is in the pipeline for the UNB?
Its expansion policy helps to strengthen its footprints first in the UAE and be the best in class, while looking at other business opportunities in the Middle East and the world, at the right time and right place. The expansion is not only for the sake of expansion but also for the sake of successfully accomplishing its vision and mission.

In 2006 UNB acquired a majority stake in the share capital of Alexandria Commercial and Maritime Bank of Egypt that has since been renamed to Union National Bank – Egypt. With this acquisition, UNB has gained access to the Egyptian banking market through 32 branches. The bank is currently considering enhancing its capital base and its distribution network to tap the growing potential of Egypt – one of the most populous markets in the MENA region.

In 2009, the bank established a presence in the Qatar Financial Centre (QFC). UNB–QFC branch is primarily focused on granting credit facilities and deposit taking from middle market, and global corporates and deposit taking from corporates and UHNWIs. UNB is exploring opportunities to further extend its presence in Qatar. It has also opened a representative office in Shanghai China, being the first bank from the region to do so. The bank also has a branch in Kuwait, offering a full range of retail and corporate banking products and services. Reviewing other geographic locations for a presence or strategic alliances will add to shareholder value.

Why is CSR so important to UNB?
CSR is a key area of focus for UNB and is intrinsically embedded in the bank’s vision, mission and strategy. It is committed to providing a positive impact on its customers, employees and the communities where it operates with a dedicated budget allocated for CSR initiatives every year. This budget has been consistently increasing every year, although we believe that the true measure and impact of CSR is through engagement and involvement of all stakeholders rather than simply by spending more money. Towards this end, UNB has been regularly getting its employees involved and participating in key CSR initiatives like Earth Hour, Desert Clean Up, volunteering, and blood donation.

Over the years the bank has consistently supported CSR initiatives ensuring that it plays an important and active role as a responsible corporate citizen, with the core area of focus centred on education, ‘Emiratisation’, special needs, climate change and the environment. UNB launched its inaugural 2011 Sustainability Report and became the first bank in the region to achieve a Level A+ rating certified by the Global Reporting Initiative. The bank followed it up with an independent external validation of its 2012 Sustainability KPIs and is currently working on finalising the 2013 Report based on the new GR4 guidelines.

UNB remains firmly committed to its core philosophy and positioning as ‘the bank that cares’, and will continue investing in efforts and resources into activities that have a direct bearing on the community we operate in. The bank will continue to support humanitarian and social causes through an integrated approach as we see this as a mutual growth process for us and for the community at large.