The former governor of the Mexican central bank has been made General Manager of the Bank for International Settlements, showing how far emerging markets have come 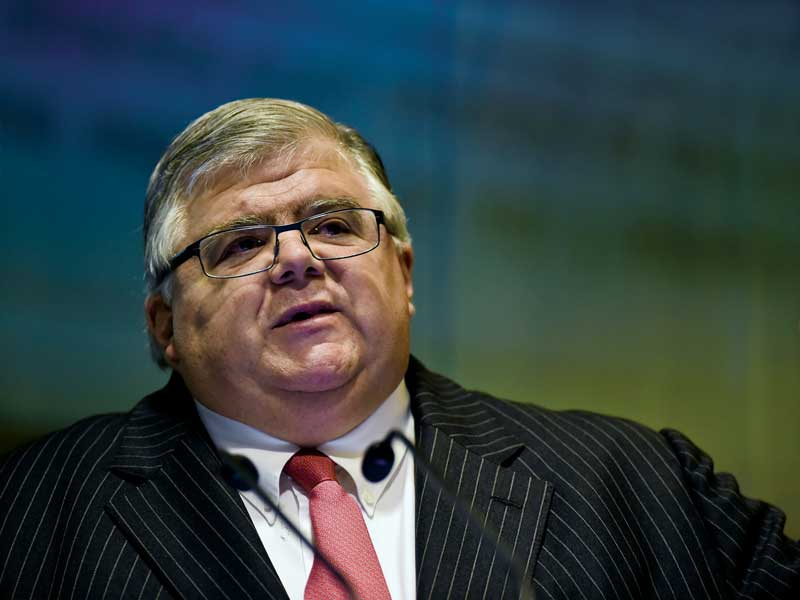 “As unconventional monetary policy starts to normalise, I think markets will start to discriminate more among asset classes like emerging markets”

Shortly after Dominique Strauss-Kahn resigned as head of the IMF following a scandal over sexual abuse allegations in 2011, Agustín Carstens’ name arose among those tipped to replace him. Carstens was at that time the governor of the Bank of Mexico, a position he took in 2010 after a solid career in the public sector, where he served as secretary of finance among other key posts.

Outside Mexico’s borders, Carstens had built an international reputation, making him a suitable candidate to lead the IMF. A few years before he had the chance to compete for the top position, Carstens served as the IMF’s deputy managing director. As an outstanding representative of emerging markets, Carstens quickly gathered support and was shortlisted alongside Christine Lagarde who was, at that point, France’s finance minister. At the time, he argued that “a pair of fresh eyes could see European problems with greater objectivity”. However, Lagarde eventually took office at the IMF, where she has remained ever since.

Despite not having achieved his ambition to head up the IMF, the Mexican economist made it clear to the global community that he was prepared to disrupt the tradition of placing more developed countries at the top of the most relevant international economic organisations.

Carstens finally achieved that goal in December 2017, when he became General Manager of the Bank for International Settlements (BIS). The international financial organisation, known as the bank for central banks, was established in 1930 and is owned by 60 member central banks of countries that, together, make up about 95 percent of global GDP.

Global influence
At a time when Mexico is being battered by the policies of the Trump administration, which include the construction of a wall on the boundary between the two countries, one person from the southern side of the border is breaking free of the usual limits of influence, reaching a global level. As head of the BIS, Carstens has started to play a key role in one of the major institutions plotting the course of the world’s economy.

Rise in inflation under Carstens

of Mexico’s exports go to the US

Speaking to World Finance, Vice Chairman of the BIS, Raghuram Rajan, highlighted what he thinks is the new general manager’s main virtue: “[Carstens] has the unique capacity of being trusted by everyone, both by the emerging markets, which believe he will understand their issues, and by the industrial countries, where he is seen as a very pragmatic and balanced person, but forceful when he needs to be.”

Rajan, who is currently a professor at the University of Chicago, met Carstens in 2003 when both economists were working for the IMF. Since then, Carstens has not only been a respected colleague to exchange ideas with, but also a trusted advisor. In 2013, when Rajan was appointed governor of the Indian central bank and had to fight an inflation rate of over 10 percent, his Mexican counterpart told him not to focus on the exchange rate, but on bringing inflation down credibly. “That was exactly what we had to do. We [set] inflation targets and the rupee has
been very stable,” Rajan recalled.

Although he was raised in a family of accountants, Carstens developed outstanding skills in the field of economics. He acquired his knowledge in the prestigious Instituto Tecnológico Autónomo de México, where he received a BA in economics. A few years later, Carstens became a prominent student at the University of Chicago, an institution known for favouring free markets and the tight control of monetary policy. In just three years, he completed a masters and a PhD in economics.

Later, he served in various positions in the public sector: he served as secretary of finance under President Felipe Calderón’s administration between 2006 and 2009, before becoming head of the Bank of Mexico, where he kept Mexico’s monetary policy under control between 2010 and 2017. He interrupted his second mandate to move to the BIS in December 2017.

During his tenure, Carstens’ authority and talent for overcoming difficulties in Latin America’s second-largest economy didn’t go unnoticed internationally. His performance not only earned him multiple awards from specialist magazines and the academic world, but his fellow colleagues have also acknowledged him. For example, in 2015, he was elected to lead the International Monetary and Financial Committee of the IMF. But there were more achievements to come.

San Agustín
Following the 2008 financial crisis, Carstens saved the country from losing around $5bn, earning him the nickname ‘San Agustín’ (Saint Agustín) in the Catholic country. Carstens’ success during this precarious time was partly due to a scheme he had helped create in the 1990s, which allowed the country to hedge against collapses of oil on the futures market. In early 2008, when Carstens was commanding Mexico’s finances and oil prices were high, his department used the hedge and helped the nation avoid a massive loss after a sudden decline in prices caused by the economic crash later in the year. Moves like this earned the Latin expert a great deal of praise. “Both as a finance minister and subsequently as a central bank governor, Carstens has been extremely reliable and innovative, even though most bureaucrats wouldn’t feel comfortable with taking such steps,” Rajan said.

Another challenge Carstens faced was controlling Mexico’s currency in troubled times. During Carstens’ final year at the Bank of Mexico, following a period of calm, inflation accelerated, mainly due to the uncertainty brought about by Trump’s election to office in the US, where Mexico sends 80 percent of its exports. Carstens had anticipated this upheaval, predicting that Trump’s victory would hit Mexico “like a hurricane” before the election. Since 2016, the inflation rate climbed markedly, to more than six percent, exceeding the three percent target Carstens had set. He reacted fast: in his final stretch at the institution, the economist hiked interest rates from three percent to seven percent – the highest level it reached in the post-crisis period.

Although Carstens was not happy about finishing his administration with the highest inflation rate in more than eight years, he said in an interview with Reuters that he was proud of his achievements. According to Carstens, concerns about inflation prove the country’s progress over time, as “an inflation level above six percent was not acceptable any more”. Speaking to journalists at the time he submitted his resignation letter, he said: “My departure must not to be taken as a reaction to the current juncture.”

Dealing with major local issues like this has strengthened Carstens’ skill set and prepared him for the next stage in his career. Despite the bittersweet feeling he had upon leaving the Bank of Mexico, he celebrated the “unexpected honour” of having the opportunity to lead the BIS.

Atypically in politics, Carstens’ departure from the Mexican central bank was announced a year in advance, which allowed a soft transition for the economy at a delicate moment. It also gave leaders at the Bank of Mexico time to find someone who could reach the high bar set by the former leader.

Technocratic governance
The BIS is managed by an elite group that represents the world’s central banks. However, Carstens is not new to this group; he had been part of the management board of the BIS since 2011. He has now climbed to a prominent position in the exclusive institution, working alongside figures such as US Fed Chair Janet Yellen, European Central Bank President Mario Draghi and Zhou Xiaochuan, Governor of
the People’s Bank of China.

In December 2017, the economist moved to Basel, Switzerland, where he took over from Jaime Caruana, the former governor of the Bank of Spain, as the BIS’ general manager. According to Rajan, Carstens’ appointment at the BIS reflects the nature of the institution: “The BIS is not run by the political establishment at the very top like the IMF. The BIS is much more technocratic and that makes a difference, because technocrats are far more able to emphasise the most meritorious candidate in an open field.”

Michael Kuczynski, Fellow of Pembroke College and an associate of the Centre of Development Studies at the University of Cambridge, also believes in the quality of the BIS’ personnel: “The BIS has remained an institution of measured tone and outstanding quality in terms of its gathering and evaluating economic and financial intelligence, and in this its authority continues unmatched and unchallenged, unlike that of its more talkative cousin, the IMF.” According to Kuczynski, having Carstens at the head of the BIS “is a good deal, more likely to safeguard its authoritative tone”.

A new perspective
Although Carstens ensures continuity for the BIS, its vice chairman states that the Mexican economist also represents a turning point at the institution. Rajan said: “By appointing Agustín, the message is clear: the BIS is saying that, as an international institution, it will pick the best from around the world.” Carstens embodies how far emerging markets have come.

Indeed, his Mexican origins give him a unique perspective, one which Kuczynski sees as an advantage for the institution: “Observers of the international economy sometimes say that to understand what is really likely to be going on in Wall Street, you have to be in Lagos [Nigeria] or in Sydney [Australia], but that to understand what is really likely to be going on in Lagos or in Sydney, you have to be on Wall Street: Carstens has the advantage of that particular dual sensitivity.” This dual viewpoint makes him capable of understanding his fellow practitioners as well as the markets’ expectations of central bankers.
The global economy is enjoying an upturn, and forecasts for the years to come are upbeat in spite of a few warnings. Still, Carstens will have multiple challenges to work on in his five-year term at the BIS. Rajan summarised the main three issues at the top of the new BIS manager’s agenda: to complete banks’ regulations, to engage in the process of withdrawing emergency monetary policies, and to lead the discussion on the risks of easing monetary policies, spillovers of leverage and others. “The BIS has the opportunity to go from being an agency that warns to being an institution that pushes for
structural changes,” Rajan concluded.

As a part of this change, Carstens will be one of the key figures in these processes. But he will also be in charge of demonstrating the advantage of global financial institutions having a dual vision in a world with a new balance of power. If he succeeds, he will set a precedent for other organisations to follow.

1982: Despite coming from a family of accountants, Carstens completed a degree in economics at the Instituto Tecnológico Autónomo de México in his native Mexico City. He excelled during his time at university.

1985: Having received a scholarship from the University of Chicago, Carstens moved to the US and undertook a master’s degree followed by a doctorate in economics.

2003: This year saw Carstens take on the role of deputy managing director at the IMF. Years later, he was shortlisted to become managing director, but lost the position to Christine Lagarde, who still holds the role.

2010: Carstens returned to the Bank of Mexico where he had interned between his bachelor’s and master’s. Here he took on the role of governor of the Banco de México, Mexico’s central bank.

2017: Cutting his second mandate at the Bank of Mexico short, Carstens moved to the BIS to become its general manager. He took over the position from Jaime Caruana, who retired from the bank.