India experienced its most severe drought for seven decades this summer. With water reserves drying up, deep flaws in the country’s water management and infrastructure have been exposed 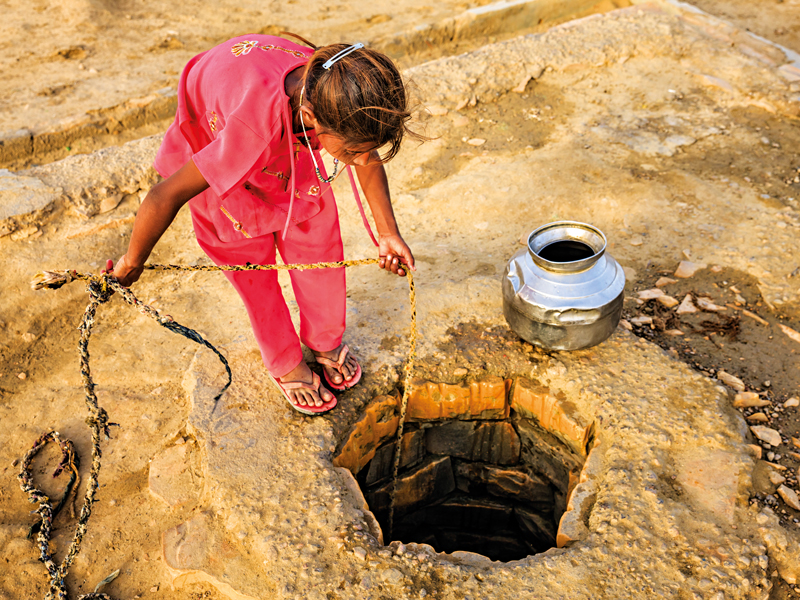 Due to the lack of rainwater, lakes and wetlands, most of India’s population is heavily dependent on groundwater: around 25 percent of the groundwater extracted around the world is removed in India
Featured | Infrastructure
Author: Charlotte Gifford

Duvvuri Subbarao, who served as governor of the Reserve Bank of India between 2008 and 2013, once spoke about the way India’s monsoon season could impact everything from his emotional wellbeing to his career prospects. In his role as governor especially, he was helplessly dependent on the weather: “If it rains, the monetary policy works. Everything is all right. If it doesn’t rain, there is worry.”

Half of India’s annual rainfall usually occurs in just 15 days. As the rainfall that takes place in this critical window has a huge impact on the country’s economic prospects for the year, this turbulent climate has often left India seesawing between deluge and drought. Recently, though, the rains have become even more volatile.

“The climate pattern of India is changing,” Samrat Basak, Director of the World Resource Institute India’s Urban Water Programme, told World Finance. “We are having extremely dry periods followed by a monsoon which is extremely heavy but happens only in a very short space of time. So the number of rainy days is reducing.”

Even when the Indian Government does enact longer-term solutions, these often prove inadequate

This year, the south-west monsoon arrived 10 days late, bringing 30 percent less rainfall than average to the region. This delay, combined with poor rainfall last year, has created drought-like conditions across nearly half of India. Chennai is one of the worst-affected regions, experiencing its most severe drought in 70 years. The city’s four main reservoirs have disappeared in as little as six months.

It’s easy to blame the hardships facing India’s population on climate change, but this isn’t the whole story: India’s water crisis is just as much a product of poor infrastructure and chronically inadequate water management.

Not a drop to drink
In a climate where rainfall occurs in such a short space of time, storing rainwater is crucial to ensuring people don’t run short throughout the year. But India has struggled to keep its water storage infrastructure properly maintained. Years of negligence meant that, during the 2018 monsoon, dams in the now drought-stricken state of Tamil Nadu were unable to retain all the water they caught.

What’s more, the government has not preserved the water-catchment areas that occur naturally in the environment. “With unprecedented and unmanaged urban expansion, we have not thought about preserving the local resources like the lakes, wetland and so forth,” Basak said. Chennai, for example, used to have abundant supplies of surface water. These have since been paved over with parking lots and skyscrapers.

Due to the lack of rainwater, lakes and wetlands, most of India’s population is heavily dependent on groundwater: around 25 percent of the groundwater extracted around the world is removed in India. Much of this is done illegally, which only adds to supply problems. In major cities like Bangalore and New Delhi, so-called water mafias rule unchecked, extracting water from kilometres away and selling it to locals at an extortionate premium. The situation became so serious in Chennai this summer that even hospitals were dependent on privately owned tankers to supply water for surgeries. The cost was then added to patients’ medical bills.

In a tragically ironic twist, many of these patients were hospitalised for waterborne diseases. In August, researchers found that over three quarters of the groundwater wells in the north-western state of Rajasthan – the largest in India – were polluted with uranium, fluoride and nitrates, making them unsafe to drink from. If groundwater depletion and contamination continue at their current levels, 60 percent of India’s districts are likely to see groundwater tables fall to critical levels over the next two decades.

Surprisingly, the biggest consumer of India’s water is not its city-dwelling population – around 80 percent of India’s water is used in agriculture. This figure is so high partly because state governments in Western India provide free or heavily subsidised electricity to farmers in exchange for groundwater irrigation. “This encourages excessive groundwater pumping and has bankrupted electricity companies,” said Tushaar Shah, a senior fellow at the International Water Management Institute. “Everyone knows this, but no political leader has the courage to rationalise or reduce these subsidies since farmers are a massive vote bank.”

As a result of these incentives, 88 percent of farmers use flood irrigation methods instead of more efficient drip or sprinkler irrigation systems. Attempts to curb groundwater usage are politically complicated, but Philippe Cullet, a professor of international and environmental law at SOAS University of London, believes a change in legislation and regulation is critical to ensure water is used more efficiently on India’s farms.

This change, he told World Finance, must stem from a different way of thinking about water. “What we need is a complete reversal of perspective that takes us back to considering groundwater – and water generally – as a commons that is shared,” Cullet said. “The second thing is that we have to move away from a framework that considers water primarily from the point of view of ‘use’ when the first priority should be protection.”

There are a number of ways the government could promote this approach to water. Incentivising farmers to use drip irrigation or grow less water-intensive crops than sugarcane or rice could be a way forward. Another promising idea, launched by the International Water Management Institute, is to create solar irrigation cooperatives where farms can generate their own solar energy, providing an incentive to save energy and water. Shah is a pioneer of this concept. “The basic premise is that, while it is politically difficult to charge farmers for grid power supplied, it is rewarding to pay them for solar power they generate on their own farms. This will incentivise them to save energy and water to augment income from selling solar power,” he said.

Build, neglect, rebuild
Water scarcity is one of the biggest challenges facing Indian Prime Minister Narendra Modi, and he is keen to be seen tackling it head-on. In response to this year’s crisis, he sent more than 250 civil servants to aid the country’s drought-stricken areas and consolidated the various water ministries into a single entity, named the Ministry of Jal Shakti. But water conservation experts are concerned that Modi’s administration has a flawed understanding of the issues at hand. As part of his response to the water crisis, Modi unveiled plans to provide piped water to all Indian homes by 2024. While there is no doubt this would have a transformative impact on India, providing clean water to as many as one billion citizens is an overambitious target. Currently, there is no indication as to where the water for these pipes would come from. “Water security plans need to be prioritised over plans for a piped water supply,” Basak said. “Just having pipes but no water won’t work.”

Unfortunately, rather than taking a fresh approach to the crisis, Modi is following in his predecessors’ footsteps. Instead of anticipating crises, India’s state governments have often acted only once the situation reaches breaking point. When this happens, they tend to fall back on expensive quick fixes that temporarily relieve pressure but fail to tackle the root of the problem. For example, when drought struck this year in Tamil Nadu, the state government approved a crash-engineering project to bring in water by rail for the following six months. As well as costing the government $94m, this short-term solution did nothing to improve India’s water sanitation and storage over time.

Even when the government does enact longer-term solutions, these often prove inadequate. Critics have accused the Indian Government of taking a ‘build, neglect, rebuild’ approach: new infrastructure is constructed, but the necessary measures aren’t put in place to ensure it is maintained. This can be seen in India’s traditional approach to water catchment. Currently, India captures only eight percent of its annual rainfall – one of the lowest figures in the world. Meanwhile, many local governments have mandated rainwater harvesting with little effect. After the drought of 2000, Chennai made it obligatory for buildings to have rainwater-harvesting systems installed, but these have since fallen into disrepair. The Rain Centre also found that, while on paper 99 percent of India’s buildings catch rainwater, in reality, this figure is closer to 40 percent, demonstrating a fundamental lack of governance.

With a climate that swings so drastically between drought and monsoon, it is perhaps unsurprising that the government has tended to think in the short term, focusing on fighting fires rather than implementing long-term solutions. But as climate change makes India’s rains even less predictable, the cost of this attitude only grows. The government must now prioritise proper governance and maintenance of its water infrastructure, or risk seeing its major cities dry up completely.