Europe’s largest infrastructure project will establish a fixed link between Germany and Denmark, boosting trade and logistics in Northern Europe as it opens up key commercial routes, writes Sandra Kilhof 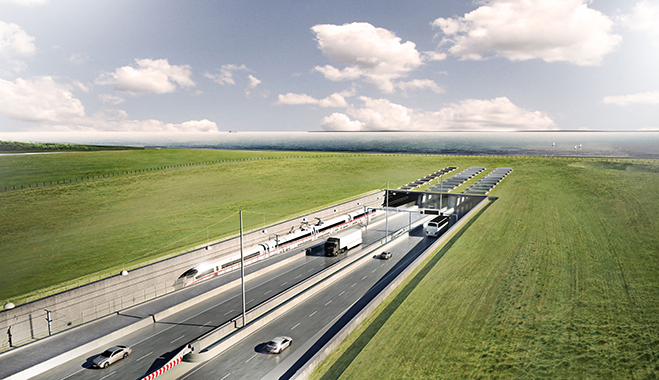 A computer generated image of the Fehmarn Belt Link, which will span Scandinavia and continental Europe
Infrastructure

Connecting the cities of Stockholm, Copenhagen, Hamburg and Berlin, the Fehmarn Belt Fixed Link will bridge the gap between Northern Europe’s economic straits, and is one of the largest infrastructure projects in Europe. The link will consist of an 18km-long tunnel containing a four-lane motorway and two electrified railroad tracks. It will open up Central Europe’s corridor and allow an unprecedented amount of traffic to travel. The link will be a game changer for European commerce and, in particular, for the trade flows between Germany and Scandinavia, which are valued at more than €100bn a year.

The Fehmarn Belt Fixed Link will connect Rødbyhavn in Denmark to Puttgarden in Germany and is expected to bring economic benefits to the entire region, including German hubs such as Hamburg and Berlin. The opening of the link will reduce the travel time to 30 minutes between continental Europe and Scandinavia, eliminating the time spent on embarking, disembarking and waiting for ferries. The whole link has been divided into four workgroups: the immersed tunnel, marine works, installations, and portal and ramps. It is estimated the tunnel motorway and railway will have a 120-year design life and, during its lifetime, some 100,000 ships will pass over it.

The project, which is currently going through final approval stages in the Danish and German parliaments, is set to open for traffic in late 2021. In 2008, Denmark and Germany signed the state treaty on a fixed link across the Fehmarn Belt and, a year, later the Danish government agreed to a project planning act that would ensure hinterland connections in Denmark to accommodate the new link. Denmark is largely responsible for the planning, design, funding, construction and operation of the Fehmarn Belt Fixed Link, and will be its sole owner and operator. Despite the EU prioritising the project as one of the 30 most important infrastructure deals in Europe – and thereby qualifying it for European funding support – Germany’s participation in the link is relatively small. So far, the country has only agreed to an upgrade of its land facilities on road and rail leading to the fixed link.

Trade flows between Germany and Scandinavia per year

The Fehmarn Belt Fixed Link is designed to close a gap in the infrastructure between Scandinavia and continental Europe. This will foster a higher level of flexibility and considerable time savings for both passenger transport and transport of goods, which is expected to increase significantly by 2025. According to the Danish Ministry of Transport, improved connections between Scandinavia and Central Europe are crucial at a time when the major Danish export markets need stronger transport connections to remain competitive.

The ministry argues that, as was the case with the fixed links across the Great Belt and Oresund, the Fehmarn Belt link will result in a significant upgrade of both national and international transport corridors benefiting societal development and economic growth in the Nordics.

“The Fehmarn Belt Fixed Link is a European project,” says Ajs Dam, Director of Corporate Communications & Regional Development at Femern A/S, the state-owned organisation overseeing the project. “It will boost prosperity and raise the standard of living in the cross-border region that comprises Eastern Denmark, Northern Germany and Southern Sweden by providing new opportunities for business development, job market integration, and cultural and scientific cooperation. It is also a central part of the European transport network, where it removes an important cross-border bottleneck on the Scandinavia-Mediterranean corridor; Europe’s main north-south axis.”

The fixed link is a high priority project in the expansion of the Trans-European Transport Network and, as such, the European Commission has supported the project with €270m in funding between 2007 and 2013.

Game-changer for trade
Given the added efficiency the link will bring to logistics corridors in Europe, it is no surprise authorities are eager to sponsor the project. Cars, lorries and passenger trains currently take 45 minutes to cross the Fehmarn Belt by ferry – not including waiting times. Freight trains between Scandinavia and continental Europe have to take a 160km detour over the Great Belt and Jutland. Once the link is completed, a crossing will take only seven minutes by train and 10 by car. Travel times will be reduced by almost two hours, with high-speed trains running between Copenhagen and Hamburg in significantly less than three hours, according to the Danish Ministry of Transport (they currently take four and a half).

“It will give trade and logistics company more freedom in terms of where to allocate their production and distribution centres along the corridor,” says Dam. “The shorter route for freight trains will make transportation by train more competitive within Europe, while the overall project will help shift freight traffic from the road to the greener mode of rail transport. In this context, the tunnel will also provide incentives for intermodal freight transport. This is also in accordance with the EU’s climate goals to reduce CO2 emissions”. Aside from the obvious boost to the billion-euro trade flows between Germany and Scandinavia, the majority of €5.5bn investment in the link (2008 prices) will benefit the European construction industry.

The nine international consortia seeking to secure one or more of the main construction contracts all include European firms. According to a report on the regional effects of the link by Copenhagen Economics and Prognos, the construction industry across Europe will profit from the development, with a particular boost to the local SMEs that will act as subcontractors for the chosen consortia and gain invaluable recognition from working on an international mega-project.

Bigger picture
The project entails much more than a tunnel alone. The fixed link across the Fehmarn Belt also requires massive extensions of the hinterland connections in Denmark and Germany. In Denmark, this includes an expansion of the railway infrastructure on South Zealand and Lolland-Falster. New bridges at Fehmarn Sound and Storstrøm will also be needed. On the German side, parts of the motorway between Denmark and Hamburg that do not already have four lanes will be expanded, and a double-track railway needs to be constructed. However, the German government has postponed development of the railway link to the Fehmarn Tunnel until after 2015 as part of a major reduction in planned government investment post-crisis. Whether this will postpone the overall project is not clear.

With both the German and Danish economies having strong shipping industries, some have expressed concerns that a drop in shipping revenue in the Nordics will outweigh the trade gains from a fixed link. However, estimates from Femern A/S suggest the project will lead to the development of new warehouse and dry port facilities close to the tunnel connections. These could prove to be viable options for shipping companies looking to expand or consolidate their business.

When looking at the overall cost of the project, it is crucial to note, that for once, a mega-infrastructure project won’t cost the taxpayers anything. Using a state guarantee model, the Danish state will underwrite the project through state-backed loan guarantees. Femern A/S takes up the respective loans and uses the money to finance the construction. After completion, the users of the link, not taxpayers or the government, will foot the bill by paying for the loans with their toll charges. A similar way of funding has been successful in the building of several other fixed links in Denmark, which many consider a pioneer when it comes to cross-water bridges and tunnels.

The decision on which European firms will finally get the honour of building the tunnel connecting Germany and Scandinavia will be made in December 2014. Actual construction work will begin in the late summer of 2015, and, without further German delay, Europe should prepare itself for the effects of an efficient new trade corridor: one of the most innovative infrastructure projects of our time.