Construction of the world’s largest airport terminal is underway in Beijing, as China moves to meet rapidly rising demand for in and outbound travel 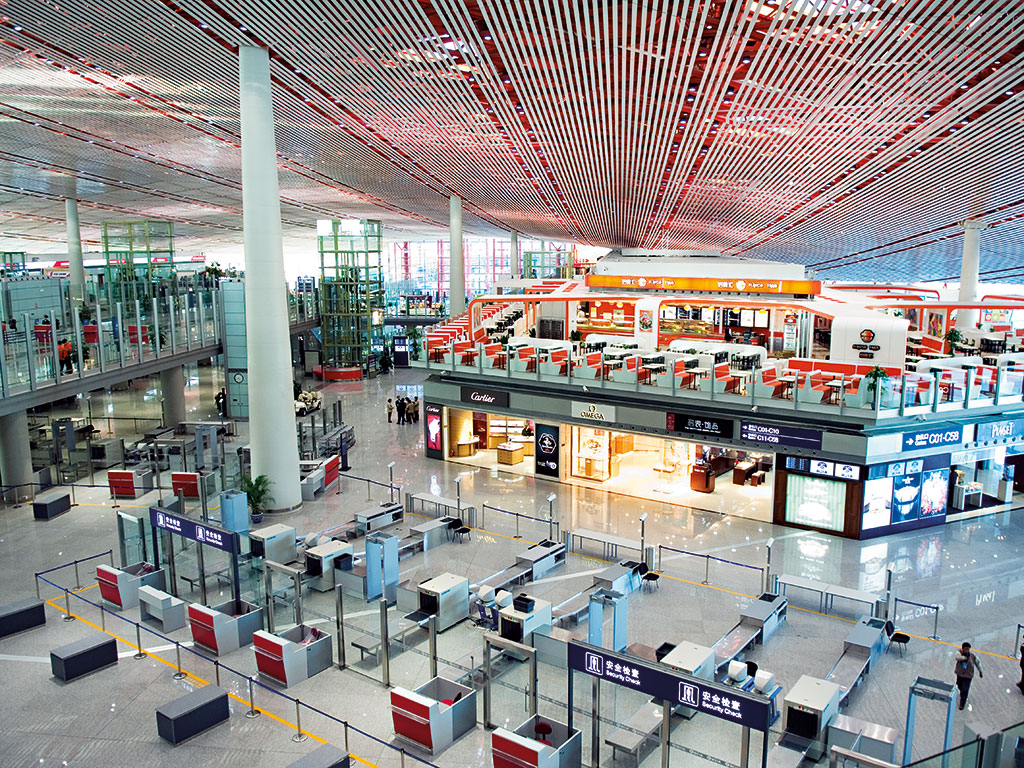 By 2020, the number of travellers passing through Beijing could hit 142 million, a report by the Chinese Ministry of Environmental Protection found in 2014. Outbound tourism is on the increase – Chinese travellers accounted for almost 10 percent of global outbound tourists in 2014 and increased their overseas spending by 28 percent in 2015, according to the World Tourism Cities Federation (WTCF). Inbound travel is meanwhile surging on the back of the nation’s growing economy.

Saturation point
All of this means that Beijing’s current international transport hub (Capital Airport) has reached bursting point, with 83.7 million passing through its doors in 2013 – well above the originally intended capacity of 76 million. It’s the second busiest hub in the world, ranking only just behind the US’ Hartsfield-Jackson Atlanta International Airport, and with limited room for further expansion it’s clear that China requires an alternative.

As a solution, approval was granted in 2011 for the $13.1bn construction of Beijing’s second international airport. Its first terminal, stretching across 700,000 square metres, is set to become the biggest in the world, with a capacity for 45 million people, which will later to be increased to 72 million. The final airport will have seven runways and, with an anticipated handling capacity of over 100 million, be one of the world’s largest overall air travel hubs. By 2020 it’s expected to witness 620,000 landings and lift-offs every year.

Construction of Terminal One begun in December 2014, and is touted for completion in 2018. Located 46km south of Beijing in the Daxing district – on the opposite side to the existing international air hub, which lies northeast of the city – the airport is expected to serve the Tianjin and Hebei provinces alongside Beijing. Connections to train services such as the Gao Tie high-speed rail network will grant travellers landing into the new port with access to various other regions across the country.

French airport design firm ADP Ingénierie and Zaha Hadid Architects (ZHA) won a competition in September 2014 to design the new terminal under the direction of Beijing New Airport Construction Headquarters (BNAH). They worked in partnership with Dutch airport specialists Netherlands Airport Consultants (NACO), who won the bid for the master design in 2011. Well-thought out construction
Blending traditional Chinese architecture with a contemporary style, the airport is designed to become one of the greenest and most compact in Asia, with runways and taxiways located close together in order to minimise the distance from one to the other, and so cut emissions. In Terminal One, international and domestic floors will be stacked vertically, and there will be just one passenger-handling centre, according to ADPI.

“The centralised single-terminal concept provides numerous benefits: efficient and economical to operate, enhanced passenger experience from the many services provided including shopping areas and inter-modal ground transport”, said the firm. “Given the terminal’s compact design, the distance between the terminal centre and the farthest boarding gate is around 650 yards, less than Asian and European terminals with similar capacity.”

As well as making the passenger experience easier, the airport is likely to bring a significant boost to China’s economy. And as travel to the region continues to grow – with the country’s passenger traffic in 2032 expected to be four times what it was in 2012 – this latest megahub might be the most game-changing of them all, forming a rival to the world’s largest airports and giving the country a further boost in its mission to reach superpower status.