Time to invest in infrastructure

Years of underinvestment have meant the world’s infrastructure needs updating, and with record low interest rates there has been no better time to invest 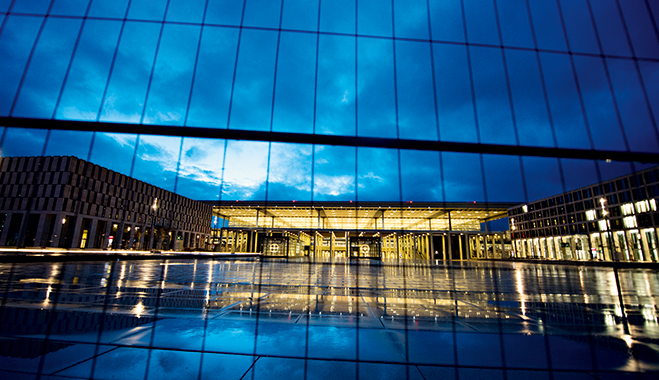 The construction site at the Berlin Brandenburg International airport. Infrastructure projects like this have been sorely neglected over the last decade, yet analysts suggest there's never been a better time for investment in them
Infrastructure
Author: Jules Gray

For all the talk of a wave of dazzling new infrastructure that will reshape the world, the last few decades have shown that the appetite for actually delivering such schemes has waned. According to the IMF, spending on infrastructure over the last three decades has fallen so much that it is desperately needed if global growth is to improve over the long-term.

The report, published in September, said that countries needed to look at projects that would help to ensure long-term economic growth. Singling out both Germany and the US, the IMF said that infrastructure projects would not prove costly in the long run. “Debt-financed projects could have large output effects without increasing the debt-to-GDP ratio, if clearly identified needs are met through efficient investment. In other words, public infrastructure investment could pay for itself if done correctly.”

Talking about infrastructure schemes is one thing. Actually getting them done is quite another. Regulatory hurdles, political wrangling, and local resistance mean it is incredibly hard to get approval for such costly projects. Despite the challenges, however, calls for governments to look at infrastructure have grown in recent months.

A recent Standard & Poor’s report showed that there has not been a better time for investment into infrastructure projects, with a global shortfall worth trillions of dollars. The report says, “With global infrastructure investment needs now in the tens of trillions of dollars – figures that are essentially incomprehensible to most of us – it’s easy to see the problem as insurmountable. The result is that too often, we forget that even a relatively small increase in spending on infrastructure can yield outsized returns – especially if investments are executed in a wise, targeted way.”

Talking about infrastructure schemes is one thing. Actually getting them done is quite another

Former British Prime Minister Gordon Brown echoed those sentiments during January’s World Economic Forum summit in Davos. Addressing world leaders, Brown said that momentum behind such schemes was gathering pace, thanks in large part to the extremely low interest rates being experienced in economies throughout the world. “There’s big momentum now at a time, as I keep saying, when interest rates are low. This may be the best time in our history to do this. And the need in America and Europe, as well as emerging markets, is obvious.”

Continuous upgrades
The difficulties faced in infrastructure schemes vary depending on how developed a country is. Whereas older, established countries like the UK have to continuously invest huge sums of money in ensuring that their creaking old infrastructure networks can continue to operate, developing nations like China are able to start from a relatively clean slate and invest in the latest technologies.

For the UK, getting any form of infrastructure scheme off the drawing board has been an arduous task. Years of political bickering and nimbyism have prevented an expansion to the over-stretched airport capacity near London, while the rail network still lags behind European rivals in terms of speed.

Throughout Europe things are little better. Germany’s supposedly flagship new airport in Berlin has been beset with problems, running wildly over budget and experiencing severe delay. Originally planned to open in 2010, it is still under construction and the reported costs are currently at €5.4bn ($6.1bn) – as much as €3.2bn ($3.6bn) over budget. Despite such shortcomings on the continent, a recent EU simulation revealed that just a one percent increase in public investment in 2015 would provide over one million jobs across the union (see Fig. 1).

The US is in particular need of new infrastructure, according to the IMF. A country that dragged itself out of the Great Depression in the 1930s through massive investment in infrastructure investments has allowed things to stagnate in recent years. “As the American Society of Civil Engineers notes, 32 percent of major roads in the US are now in poor or mediocre condition, and the US Federal Highway Administration estimates that between $124bn and $146bn in capital investment will be needed annually for substantial improvement in conditions and performance – considerably more than the $100bn spent on capital improvements at all government levels.”

Clean slate
Infrastructure projects across Asia have had a very varied success rate in terms of implementation. China has fuelled its economic growth over the last decade by pumping money into expanding its airports, rail networks, energy and many other forms of infrastructure. While an attempt over the last year was underway to rebalance the country’s economy away from such heavy investment, 2015 began with the news that China will fast-track 300 infrastructure projects during this year in order to boost its flagging growth. Both central and local governments, as well as state-owned firms and some private sector involvement, according to Bloomberg, will fund the $1.1trn worth of projects. These schemes are likely to involve oil and gas pipelines, clean energy projects, transport, mining, and healthcare services.

For years, India has talked enthusiastically about its desire for new infrastructure projects, but the reality of getting them built has proven particularly troublesome. Last year the World Bank released a report into how India and its neighbouring South Asian economies were not spending anything like enough on improving their infrastructure networks. The report stated that even though the region had experienced huge economic growth over the last decade, the sort of infrastructure investments that would help improve the living standards of the regions’ poorest people was not matching this.

According to the World Bank, the funding gap in infrastructure amounts to around $2.5trn. Luis Andres, the Lead Economist for Sustainable Development in South Asia, said in the report, “If South Asia hopes to meet its development goals and not risk slowing down growth and poverty alleviation, it is essential to make closing its huge infrastructure gap a priority.”

Dan Biller, the report’s co-author, said that funding in South Asia was well below that of other developing parts of the world. “For the past 20 years, the South Asia and East Asia regions have enjoyed similar growth rates. Yet South Asia’s access to infrastructure services lags significantly behind both East Asia and Latin America with some access rates comparable only to Sub-Saharan Africa.”

Long-term thinking
Perhaps change is afoot in some countries. The UK’s opposition leader Ed Miliband recently commissioned a report into a potential National Infrastructure Commission that would take the decision making of such big and vital projects out of the hands of politicians. The current coalition government is said to be in favour of such a scheme, as are the construction industry, but whether politicians actually have the guts to hand over control of such costly projects remains to be seen.

In the EU, regulations that have prevented much headway in big cross-border schemes are being looked at. Indeed, a report by the EU Task Force on Investment was published in December revealed that there were as many as 2,000 potential projects that had stalled across the EU which governments should look to get underway. Worth around €1.3trn ($1.47trn), around €500bn ($565.5bn) of these projects could be started within the next three years. According to the report, the first and most important step is removing regulatory barriers that are holding up these projects, such as deeper integration of regulations and less fragmented capital markets. The years ahead will prove increasingly interesting in the global construction market. While there are a huge number of projects that have been proposed, turning them into a reality will prove difficult unless there is a clear, coherent and long-term plan.

S&P say that all countries, regardless of the stage in their development, need to invest in infrastructure. They also argue that improvements in how these projects are selected, appraised and delivered will go a long way in ensuring governments are more confident in committing to costly, large-scale infrastructure schemes. “It’s vitally important for countries to improve the quality of their infrastructure investments in addition to simply increasing spending – regardless of where economies stand in their development. Among other things, this could entail better project appraisal and selection, perhaps through independent assessment, comprehensive cost-benefit analyses, and improved project execution.”

Whether the private sector or governments will take the lead in this area depends on the region. With austerity holding back government spending throughout Europe, for example, it is the private sector that has been looking to pick up the slack. But they can only do so if regulations are reformed and things are made easier for them to raise the necessary finance.

“This is especially important given that governments are spending a much smaller portion of their budgets on infrastructure – particularly in the west. In the US, government spending on projects as a percentage of GDP has tumbled to the lowest in more than 20 years, and in the eurozone, governments’ austerity measures have significantly eaten into spending on infrastructure development and repair”, add S&P.

With interest rates throughout the world so low and governments either getting fed up with austerity or through the worst of it, investing in rebuilding infrastructure could prove to be a vital way of getting economies growing again. Jobs will be created in the short-term, while countries will benefit from modern, long-term new projects that will support them for years to come.