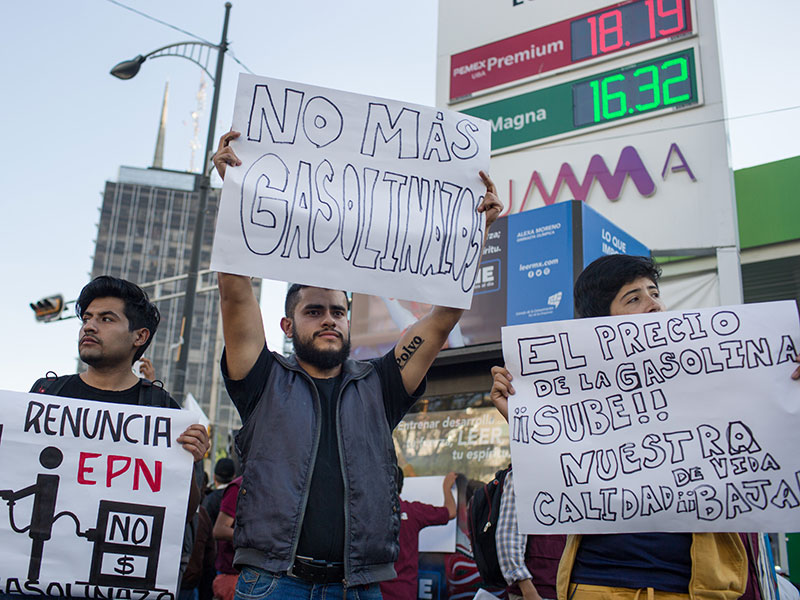 Mexican citizens protest the recent gas and diesel price hikes. According to the government, fuel prices have been deregulated for the long-term wellbeing of the nation
Energy | Markets
Author: Erica de la Harpe

Citizens have taken to violent protests in the streets of Mexico following days of unrest caused by gas and diesel price hikes in the country. The announcement of the price deregulation, which would lead to an increase in the price of diesel by 16.5 percent and gasoline by 20 percent, came on 1 January 2017. With high inflation and a weak peso, a gallon of gasoline now costs Mexicans the same as a day’s wage on minimum pay.

The country faced fuel shortages and panic fuel stockpiling in December. Hostilities then escalated in the New Year with demonstrators looting shops, blockading highways and forcing service stations to close. Since the price surge was announced, more than 600 people have reportedly been arrested and 170 stores have closed.

The deregulation strategy involves the government ending subsidies and letting the market dictate prices. It is part of the energy reform passed two years ago by President Enrique Pena Nieto, which established 90 different tariff zones where prices are allowed to fluctuate. Officials have said the approach is necessary to cover shortfalls in the federal budget, which traditionally relies on oil revenues.

With economists forecasting Mexico’s GDP to expand a meagre 1.7 percent this year, the government faces a tough year of policy decision-making for a restless population.

The Mexican President, in a television address to the nation, admitted the energy price decision was an unpopular measure, and that he empathised with the angered public. He nevertheless defended the move as necessary and responsible for the long-term wellbeing of the nation. He claimed that the move is “a responsible measure consistent with what I have decided is a priority for our government to preserve our economic stability”.

However, economic stability won’t come easily for the nation, with infrastructure presenting a major hurdle for progress. The national oil company, Petroléos Mexicanos (Pemex), has struggled with supply issues, pricing and maintenance concerns for years. According to Reuters, Pemex will face further budgetary cuts of around $5.36bn, while its refineries are currently only running at around 60 percent of their 1.576 million barrels-per-day capacity.

Corruption also remains a persistent disruption to development: fuel theft due to illegal taps in the pipelines that carry gas to central parts of the country is big business for organised crime groups. Estimates put the value of losses caused by criminal behaviour at $1.4bn a year.

Nevertheless, there is a silver lining to this dark gas cloud: as the 11th biggest consumer of gas globally, deregulation in Mexico will result in an opening in the market to foreign companies for importation, asset ownership and competition. It is a renaissance for the industry and a big opportunity for international investment.

For the Mexican economy, raising fuel prices will also mean filling the gaps in the budget with previously lost opportunity costs. Selling a commodity at below market price to the populace has been common practice among many oil-producing states. Mexico’s decision to move away from this practice will allow the government to halt these losses, albeit at the dismay of those who can no longer afford the goods.

Economically, the move will create a boost to the struggling economy – politically, however, the effects may be short lived. Given the growing dissent expressed towards Nieto, the ramifications of his decision-making may result in rising prospects for populist opposition leader Andrés Manuel López Obrado in the 2018 presidential elections.