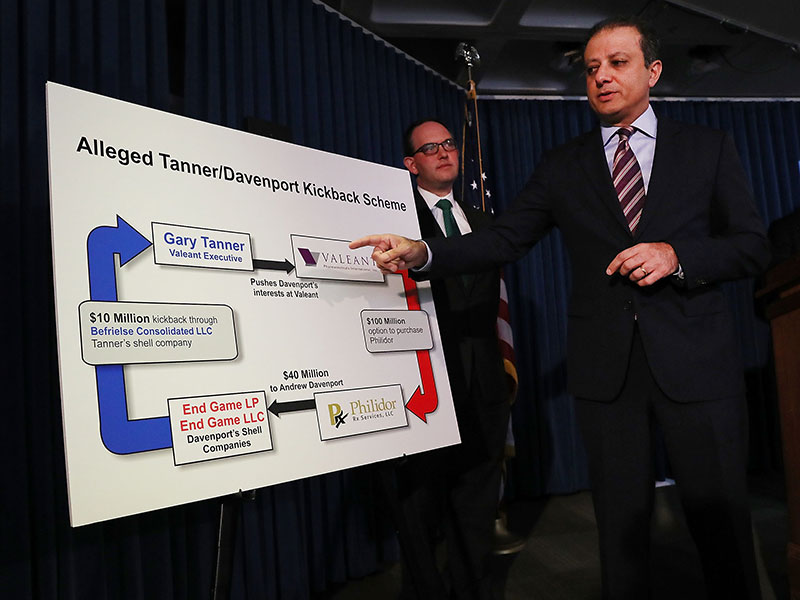 Preet Bharara, US attorney for the Southern District of New York, discusses the charges being faced by two former pharmaceutical executives for their participation in an illegal kickback scheme
Markets
Author: Kim Darrah

On November 17, Andy Davenport, CEO of Philidor, and Gary Tanner, a former senior Valeant director, were arrested and charged for their participation in an illegal scheme. The arrangement involved a covert kickback payment, through which they each hoped to receive millions of dollars in personal profits.

Valeant Pharmaceuticals International has been embroiled in a scandal for the past year regarding its involvement with Philidor, an online pharmacy that was kept secret from investors. The online pharmacy purportedly used fraudulent tactics to drive increases in drug sales for Valeant.

Valeant’s stock has dipped by over 90 percent since August 2015, as details of its drug pricing and business practices have come to light

Valeant’s stock has dipped by over 90 percent since August 2015, as details of its drug pricing and business practices have come to light.

These high-profile arrests come as another blow to Valeant amid ongoing investigations into the company’s business practices. Allegedly, the scheme concluded with Davenport earning $40m after Valeant agreed to pay $100m for the right to buy Philidor. Davenport then kicked back $10m to Tanner.

According to a statement given by the prosecutors: “The kickback payments were made in secret and laundered through a series of shell companies and transactions designed to conceal the illicit source, nature, ownership and control of the funds.”

The charges further allege that Tanner, who at the time was a Valeant executive, was covertly working with Davenport towards the ultimate goal of accomplishing a purchase option agreement between Valeant and Philidor. This involved efforts by Tanner to boost business for Philidor through various methods, including by resisting business relationships with Philidor’s competitors.

Valeant released a statement on the morning of the arrest emphasising that there have been no charges against the company, former CEO, former CFO or current executives. It further stated: “Gary Tanner ceased to be a Valeant employee on September 13, 2015, and Andrew Davenport has never been an employee of the company. The counts issued today include allegations that the charged parties engaged in actions to defraud Valeant as a company.”

As investigations into Valeant and its business partners continue, the firm and its investors are set to face more hurdles well into the new year.