The recently renamed capital of Kazakhstan, Nur-Sultan, is joining a long list of global financial centres. Although it has a lot to do to catch up with the likes of London and Frankfurt, it is already making impressive progress 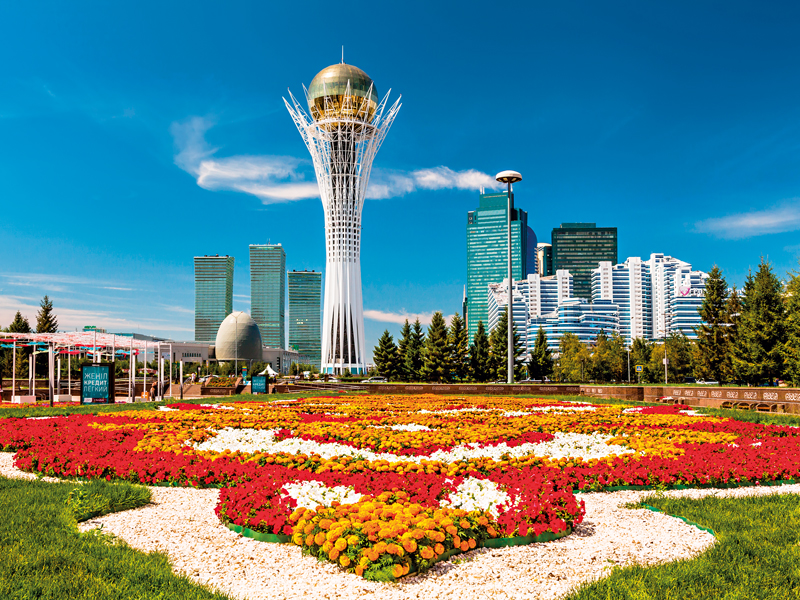 Kazakhstan may not be that well known, as a financial centre or otherwise, but this looks set to change thanks to its central location near Asia, Russia and Europe
Featured | Markets
Author: Barclay Ballard

In July 2019, Mark Yeandle, lead author and co-creator of the Global Financial Centres Index, addressed journalists gathered in the Kazakhstani capital of Nur-Sultan for the latest edition of Astana Finance Days and offered a forthright assessment of the finance sector. “We have over 100 financial centres in the world,” he said. “If you asked me a straight question, ‘Does the world need another international financial centre?’ The answer is: ‘No’.”

The admission was all the more surprising given its setting: Astana Finance Days is a four-day event designed to showcase Nur-Sultan as a new name on the global financial circuit. Yeandle did not intend to burst any bubbles – rather, he simply wished to offer a dose of realism. Nur-Sultan is competing with global heavyweights with a long history of financial success, as well as a good
number of fellow upstarts.

If Nur-Sultan is to successfully demonstrate that it is more than just another international financial centre, the city has to build a convincing narrative that will grab the attention of investors

But regardless of whether the world needs more international financial centres, it is getting them, and there are reasons to believe that Nur-Sultan – given time – could compete against its better-known rivals. Efforts are already well underway to bolster the city’s reputation as a financial hub, with swift progress being made in areas like regulatory standards, infrastructure and human capital. It is easy to sneer at Nur-Sultan’s ambition of becoming the epicentre of finance in Central Asia, but great strides are already being made.

Reputation building
In many respects, Nur-Sultan is starting from the beginning. Ask people where Nur-Sultan is and most would probably stare back blankly – and you can hardly blame them. The capital city was known as Astana until March of this year, when it was renamed in honour of former president Nursultan Nazarbayev, who had recently stepped down. Even Kazakhstan itself, despite being the ninth-largest country in the world, could hardly claim to be particularly well known. Attracting investment here, over the likes of London, New York or Shanghai, will not be easy. Fortunately, those tasked with turning Nur-Sultan into an international financial centre have already got to work.

The Astana International Financial Centre (AIFC) was launched on July 5, 2018, and represents the fundamental strand of Nur-Sultan’s ambitions. As well as looking the part – the AIFC is housed in the grand surroundings of the Kazakhstan Pavilion and Science Museum, built for Expo 2017 – the AIFC incorporates a number of the principles and standards that international investors have come to expect from a leading financial centre.

For example, participants in the AIFC are granted access to a simplified visa regime, whereby citizens of OECD countries, Malaysia, Monaco, the UAE and Singapore can stay in Kazakhstan for 30 days visa-free. This visa waiver also has the potential to be extended for up to five years. In addition, individuals and businesses registered with the AIFC are exempt from individual and corporate income tax, as well as from property and land tax for any properties located on the AIFC premises, until the year 2066.

“The AIFC has already become a centre that attracts major international banks and investment companies,” noted Kassym-Jomart Tokayev, President of Kazakhstan, at Astana Finance Days. “Important activities of the centre will be asset and funds management and the introduction of new financial and green technologies. In the turbulent conditions of the world stock and currency exchanges, the AIFC will become a generator of attracting investment in the economy and financial sectors of the [Eurasian Economic Union] countries.”

Certainly, the AIFC has got off to a flying start. Already, more than 200 companies have registered with the financial centre, including firms based in more than 20 countries, such as the UK, Russia, China and the US. Among some of the bigger names signed up to the AIFC are the China Development Bank, Russell Bedford and Shinhan Investment. Announcements regarding new participants are never far away.

Laying down the law
One reason businesses are so keen to sign up to the AIFC is the strong regulatory environment it offers. Operating alongside the AIFC is the AIFC Court, an independent judicial system designed to resolve civil and commercial disputes involving AIFC participants or any external party that has chosen the AIFC Court to adjudicate on an issue.

“We have a robust enforcement system at the court within Kazakhstan,” explained Christopher Campbell-Holt, Registrar and Chief Executive of the AIFC Court, at the conference. “When we have a judgment it can be enforced without going to the local court; it’s enforced directly by the enforcement agents of Kazakhstan with our step-by-step enforcement procedure. And the idea is that it’s as quick as possible. And we have more faith in it because we have some control over it. We don’t charge any fees. This will continue to be the case at least for the next two years and is very important when you want to drum up new business for the court.”

Perhaps most important is the fact that the AIFC Court will implement English common law, as opposed to Kazakhstani civil law, for all of its dispute resolutions. In a common law system, courts follow the customs and precedents set by prior judicial rulings. The AIFC Court has assembled a team of experienced and knowledgeable judges to oversee proceedings, including former chief justice Harold Woolf, former minister of state for justice Edward Faulks and barrister Patricia Edwards.

This is the first time a common law court system has been used in the post-Soviet world. It allows businesses and investors to work within a legal framework that they trust and has been successfully implemented in a number of other highly ranked financial markets, including Hong Kong and Singapore.

The AIFC Court also boasts an e-filing system, named eJustice, to ensure disputes are resolved as quickly as possible. This system means parties can file cases electronically with the court from anywhere in the world without having to be physically present in Nur-Sultan. In fact, the AIFC resolved its first case in April of this year via its small claims court, with the judgment issued by a magistrate in London via email.

Alongside the AIFC Court is the AIFC International Arbitration Centre (IAC), which provides an alternative dispute resolution service that avoids court litigation by using respected mediators from the EU, Russia, Japan and several other markets. Together, the AIFC Court and the IAC help deliver the solid regulatory environment that investors expect. For individuals and corporations that might not be familiar with the local business and legal landscape, these two institutions provide much-welcomed assurance and reliability.

The centre of the world
Kazakhstan may not be that well known, as a financial centre or otherwise, but this looks set to change. Aside from being a huge country, its location in the centre of the Eurasian landmass is a substantial asset for the nation. Bordered by China to the east, Russia to the north and with European markets just a few hours away to the west, Kazakhstan is well positioned to take advantage of any economic developments taking place in Central Asia.

Many nations in this part of the world have rich deposits of natural resources, including oil, gas, zinc and copper. In a number of cases, the collection of these resources remains »
underdeveloped, meaning there is huge potential for extractive industries. There is another reason why investors might be looking to Central Asia for future gains: the region’s young, well-educated population.

The average age of Kazakhstani citizens is 30, with more than 70 percent of the working-age population currently active in the labour market. Average wages come in at around $516 a month, significantly lower than other nations with a similar GDP per capita. This represents a fantastic opportunity for foreign businesses looking to target the Central Asian market. Over the next decade, it is estimated that the region has the potential to attract $170bn in foreign direct investment, with $40-70bn residing in non-extractive industries.

One of the biggest investment draws in Kazakhstan in the coming years is expected to be China’s Belt and Road Initiative (BRI). Already, several large-scale infrastructure projects are underway, looking to connect the Asian state with markets in Europe, using Kazakhstan as a transit country. This includes the development of the Aktau seaport, a railway corridor joining Kazakhstan, Turkmenistan and Iran, and a hugely ambitious plan to turn the Dry Port of Khorgos on the Kazakhstani-Chinese border into a central distribution hub for any number of products. These projects, of course, will all need financing – which is where the AIFC comes in.

“If you want to set up a new financial centre, you have to differentiate it,” Yeandle said. “You have to explain why it is different and how it is going to compete. Now, obviously you’ve got things like the geographical element, which is extremely important for this region. If I had to pick one thing in favour of Nur-Sultan as a financial centre, I think it’s about financing and helping the distribution and financing along the Belt and Road. Geographically, it’s in an ideal spot.”

Still, the BRI will not be enough to guarantee Nur-Sultan’s success as a financial centre: last year, it was announced that the China Development Bank would stop funding a $1.9bn railway project that was set to snake its way through Nur-Sultan. Internal issues relating to a domestic Kazakhstani bank were reportedly to blame but, whatever the reasons, the possibility of China withholding or cancelling loans will always be present with these major BRI projects.

A story of success
If Nur-Sultan is to successfully demonstrate that it is more than just another international financial centre, the city has to build a convincing narrative that will grab the attention of investors. It could specialise in Islamic finance, but businesses for which this is an important consideration may choose to operate in Dubai, Casablanca or Abu Dhabi instead.

Focusing on new financial developments might provide a better way for Nur-Sultan to carve out a niche, and the AIFC is already gaining a reputation as a hub for fintech companies. Earlier this year, the AIFC presented three fintech start-ups – all finalists of the Visa Everywhere Initiative – at an event organised by the National Innovation Agency of Thailand. One of the companies being showcased, Chocofamily, is the biggest e-commerce firm in Central Asia, with 1,800 merchants and 35,000 active customers.

However, the most convincing story that Nur-Sultan could tell potential investors should focus on the progress the city has already made. Despite only launching as a financial centre in 2018, the AIFC has already moved to 51st position in the Global Financial Centres Index, a rise of 37 places year on year, securing top spot in the Eastern Europe
and Central Asia regions.

Although the Kazakhstani capital may never become a financial hub to rival the likes of London or Frankfurt, its progress to date has already made individuals and businesses take notice. Central Asia may not be as economically developed as some of the world’s other major regions, but that is exactly why Nur-Sultan has been able to make great strides in such a relatively short time. As the long list of global financial centres continues to grow, the AIFC is already proving itself to be a welcome addition.