The problem of art in the digital realm is one of authenticity. With digital assets eminently reproducible, non-fungible tokens use blockchain technology to certify originals and may just bring about a revolution in the world of digital art and collectibles 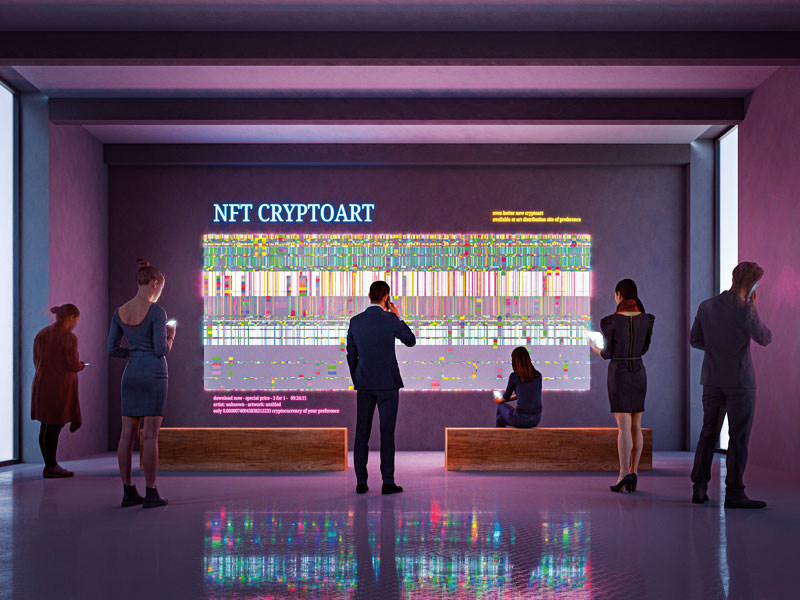 In the art world, rarity confers value. There is, and can only ever be, one Mona Lisa. This maxim is even more important to a replicable form such as photography, where a single set of negatives could produce a countless number of prints – the fewer authorised prints produced, the more each print is worth. It is an archetypal example of scarcity value.

But ubiquity also bestows its own form of value, and nowhere is this more evident than on the internet. Views are a commodity that can be bought and sold. Sharing is paramount.

More people with a meme saved on their phone gives it more cultural – and, now, financial – power (see Fig 1). At the heart of this commodification is the latest craze in cryptocurrency: the NFT. NFT stands for non-fungible token, meaning each unit is not interchangeable. While cryptocurrencies such as Bitcoin function through every token being completely interchangeable, NFTs are specifically unique. If you swap a five-pound note for another, your asset remains unchanged. If the Louvre swaps the Mona Lisa for another painting of equal value, their asset will be entirely different. This is why NFTs are innovating markets that require items to be unique and authentic, such as collectibles and art. NFTs convert assets into tokens stored on a cryptocurrency blockchain that prove the authenticity of that digital item. A blockchain – a database of linked records, or blocks, which grows with new data – depends on cryptography, the technique used to protect the privacy of a message by encoding it into a form that is only understood by the intended recipient using public and private keys. The private key of the recipient acts like a digital signature. For NFTs, the creator’s public crypto key acts as a certificate of authenticity, and the buyer’s private crypto key as proof of ownership.

Any digital artwork that is sold as an NFT remains copyable. The difference in value is accounted for in terms of authenticity. Compare a poster of the Mona Lisa to Da Vinci’s painting: the former can be purchased for pennies while the latter is worth around $1bn, despite bearing an identical image. While, on the internet, anything and everything is in abundance, NFTs create scarcity.

A brief history
The term NFT can be traced back to Bitcoin: a peer-to-peer electronic cash system, the whitepaper on blockchain and distributed ledgers published in 2008 under the name Satoshi Nakamoto.

It is widely argued that the first NFTs were ‘coloured coins,’ tokens made of small denominations of Bitcoin that were used in the early 2010s to represent assets such as company shares, property, and, in some cases, digital collectibles. However, they required all participants to agree on their worth.

In 2014, decentralised exchanges that allowed asset creation were built on top of the Bitcoin blockchain and network. Counterparty was the dominant platform in this area until 2017, when it was superseded by Ethereum, now the most actively used blockchain, whose cryptocurrency, Ether (ETH), is second only to Bitcoin. Ethereum developed an interface that tracks ownership and movement of individual tokens on the blockchain, a key innovation in the formation of a functioning NFT market.

One of the earliest markets that utilised the blockchain was trading card games, followed by other quirky NFT exchanges, including meme marketplaces and 2017’s Cryptokitties, a still thriving virtual game where cartoon cats are adopted, bred and traded, based on the premise of value in rarity. 2017 also saw the birth of Cryptopunks, 10,000 unique algorithm-generated cartoon characters that were given away on the Ethereum blockchain. The name is a reference to Cypherpunks, who experimented with precursors to Bitcoin in the 1990s – as the name suggests, the simple visuals reference the early days of the internet. Cryptopunks are still being traded today, and NFT antiques have also enjoyed an increase in value, with some being sold for over $1m in this year’s NFT boom. But it is the digital art market that has driven the phenomenal rise in NFTs’ value.

A breakthrough year
The first quarter of 2021 has been the NFT gold rush. The average sale price of an NFT in January 2020 was $30; in a year, that figure skyrocketed, to $195 in January 2021. By the middle of February, the average NFT cost $4,000. NFT history was made in March, when Everydays became the first purely digital work of art to be sold by a major auction house. The piece, by digital artist Beeple, AKA Mike Winkelmann, is a collage of works he created for a project in which he posted a new digital artwork every day. It sold as an NFT for $69m. As of April, there was a 60–70 percent drop in average price since February, from $4,000-plus to around $1,500. However, stability of prices is a good sign for longevity, as it suggests that the NFT market is far from a bubble about to burst.

The decrease could be attributed to fewer outlying sales, such as Beeple’s Everydays, which drive up the overall average. Trading volumes have continued to rise: in one week in February, the volume of NFT trades doubled, from 20,000 a week to 40,000 a week, and, according to data platform NonFungible.com, there were as many as 80,000 weekly NFT transactions in March. While speculators use the ‘hype cycle’ to predict the future value of the NFT market – which, at the end of Q1, was worth around $250m – its popularity is driving NFT art and alternative applications of cryptocurrency technology towards the mainstream.

The NFT footprint
Financially, NFTs are a step towards a decentralised economy, as they work through peer-to-peer transactions. ‘Smart contracts’ written into NFT code mean that the terms of the agreement between the buyer and seller are self-executing, eliminating the need for a third party. The structure of the blockchain makes transactions irreversible. Smart contracts have been innovative regarding artist fees in NFT art spaces, automating an artist commission every time the piece is sold. Experiments with smart contracts are revolutionising ideas of ownership: a project called Terra0 made a forest in Germany an autonomous economic unit, unmanaged by human beings.

This is a bold ecological statement, considering the damaging environmental impact of the blockchain. ‘Mining’ – auditing of the blockchain carried out by highly sophisticated computers through solving complex maths puzzles – requires an abundance of electricity. In fact, each NFT transaction on Ethereum consumes the equivalent daily energy used by two US households.

Developers are working towards building a less computationally intensive design. Some, such as Ethereum co-founder Charles Hoskinson’s platform Cardano, use a ‘proof of stake’ mechanism as a more energy-efficient alternative to the ‘proof of work’ system currently used by most major blockchains to validate transactions and mine new tokens. While Ethereum is currently transitioning from proof of work to a proof of stake mechanism, a first in the cryptocurrency sector, a similar move is currently untenable for Bitcoin.

Until Ethereum’s migration is successful, the most sustainable option for proof of work blockchains is to fuel their computers using renewable energy. The use of sidechains – a separate but attached addition to a parent blockchain – is also a less energy-intensive development.

The future of art
Where NFT art is concerned, investors and collectors will follow digital artists to platforms where they decide to sell – and many artists are opting for ‘green’ NFTs, using platforms such as Hic et Nunc, an infrastructure built on the proof of stake Tezos blockchain. Peer-to-peer platforms make it easier for artists to be in contact with collectors, but that comes with its own challenges. While the NFT is largely a financial innovation, it is now a combination of speculators, investors and collectors who are buying NFT art and other collectibles. “At first, the cryptocurrency hoarders were trying to diversify their portfolios, and most of them didn’t collect art,” Fanny Lakoubay, a crypto-art advisor and collector, told World Finance.

While, financially, the blockchain drives towards decentralisation, it remains to be seen whether this model works for the fine art industry, where third parties such as galleries and auction houses play an important role in curation, sales, and maintaining the fine line between an artist’s accessibility and exclusivity.

Sales platforms for NFT art remain tech-dominated, though online galleries such as the Digital Art Museum and the Museum of Contemporary Digital Art are chronicling digital fine art as a cultural, not just financial, asset. In fact, artists are using NFT art itself to explain and explore blockchain technology, such as Primavera De Filippi’s sculpture Plantoid, a series of plant-like metal sculptures that each have an attached cryptocurrency wallet.

Viewers are invited to send cryptocurrency to the wallet of any sculpture they like; when a certain amount is reached, software automatically commissions another artist to create a new sculpture with its own digital wallet, and so on. De Filippi, who researches the legal implications of smart contracts at Harvard University, has not only integrated cryptocurrency into her piece, but used it to demonstrate how blockchains work. “It’s pushing the boundaries of what digital art can be,” Lakoubay says. “Not just a JPEG attached to a certificate of authenticity on the blockchain.”