Space tourism prepares for take off

There has always been significant interest in the final frontier and as commercial space companies work to make space tourism a viable market, we may not have to wait too long for the price of admission to come back down to Earth 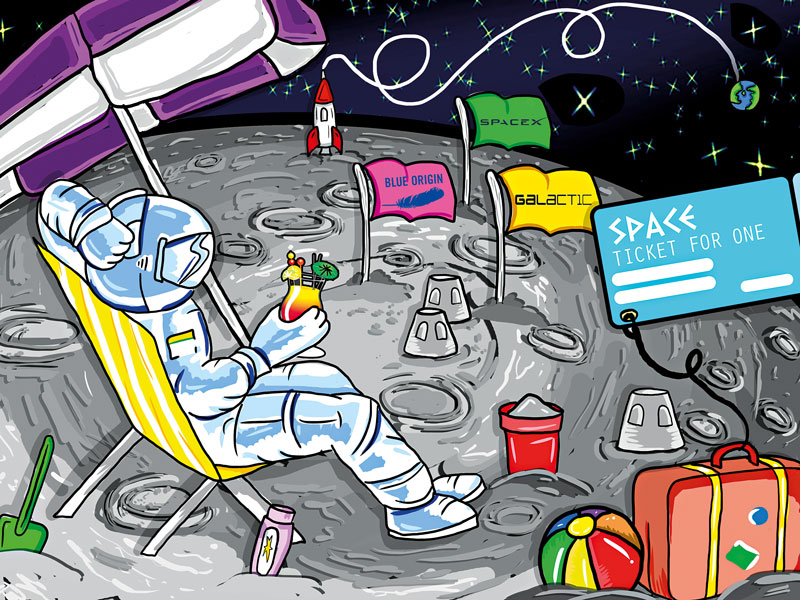 Once dominated by national space agencies, private companies are revolutionising the technology-constricted space travel industry. Exciting scientific developments are funded by impressive levels of investment: in 2017, 120 venture capital funds put $3.9bn into commercial space companies. While most private aerospace companies are research-focused, a market for sending non-astronauts to space is emerging, as flights become autonomous and no longer require a trained astronaut to operate the craft. This year, the success of the first tourist spaceflights has been a breakthrough.

Whether space tourism can generate enough turnover to make a profit, considering the high costs, is a major barrier to this yet unproven market becoming sustainable. The successful development of reusable launch systems is a big step towards lowering costs enough to make it a viable market: Elon Musk, whose aerospace company SpaceX was founded with this goal in mind, has claimed that “the cost of access to space will be reduced by as much as a factor of 100.” In the next decade, the value of the space industry as a whole is expected to double, from $400bn to $800bn. According to UBS, the space tourism market alone could be worth $3bn by 2030.

New horizons
An important distinction in space tourism is between suborbital spaceflight – which usually peaks approximately 60 miles above sea level at the Kármán line (the boundary between the Earth’s atmosphere and outer space), where passengers experience a view of the Earth and a feeling of weightlessness – and orbital spaceflight, in which a spacecraft ventures beyond the Kármán line and into orbit. Jeff Bezos’ Blue Origin and the Richard Branson-founded Virgin Galactic are both developing suborbital flights.

Blue Origin sent its first crewed mission of private travellers into space in July 2021. The New Shepard rocket – named in honour of Alan Shepard, the first American astronaut to fly into space – is just over 18 metres tall (around the height of a four-storey building), consisting of a booster rocket and a 15 cubic metre pressurised crew capsule. The rocket flies up to the Kármán line and the capsule separates from the booster near the peak of ascent; the former deploys several parachutes to return safely to the Earth’s surface, while the latter undertakes a powered landing.

The flight lasts just 11 minutes and is thought to require one day of training. Blue Origin’s first paying customer was 18-year-old Oliver Daemen, replacing an anonymous buyer who purchased the seat at auction for $28m. As well as Jeff Bezos and his brother Mark, the crew was completed by trained astronaut Wally Funk, who, at 82, became the oldest person to fly to space. Her record was quickly surpassed when, in October, 90-year-old Star Trek actor William Shatner was on board Blue Origin’s second successful crewed flight. It has been reported that Blue Origin has sold almost $100m worth of tickets to tourists for future trips. While Bezos was expected to be the first of the private space entrepreneurs to board a suborbital flight, he was beaten by Richard Branson. Virgin Galactic is primarily focused on tourism, and the Virgin brand experience is a selling point of Virgin Galactic’s offering, which prioritises photo opportunities and is advertised on luxury experience websites.

For $250,000, a Virgin Galactic space tourist can expect a 90-minute tour after three days of training. Unlike Blue Origin’s New Shepard, SpaceShipTwo – which has been specifically designed for space tourism – is a spaceplane, a class of vehicle intended to function like a fixed-wing aircraft in the Earth’s atmosphere, and like a spacecraft beyond. The spaceplane is carried by WhiteKnightTwo to an altitude of 8.5 miles, where upon release its hybrid rocket motor propels it to the Kármán line before it glides back to Earth.

Virgin Galactic also has plans to revolutionise tourism in another way: by replacing long-haul flights, which usually cruise at an altitude of around seven miles, with high-speed travel via space. UBS predicts that this form of high-speed travel could be a $20bn annual market in 10 years’ time. Virgin Galactic went public in 2019, and has a market cap of $6m. Since it was founded in 2004, Virgin Galactic has raised more than $1bn in funding.

Above and beyond
While both Blue Origin and Virgin Galactic are offering suborbital experiences, Elon Musk has his sights set higher. SpaceX became the first private company to send a spacecraft to the ISS when its unmanned Dragon One docked in 2012, and last year became the first private company to send astronauts to the ISS in Dragon Two. This spacecraft has two variations: Cargo Dragon, an update on Dragon One, and Crew Dragon, which can carry up to seven passengers. While Crew Dragon’s primary function is to transport astronauts to and from the ISS as part of Nasa’s commercial crew programme, it will also be used for space tourism.

In September 2021, SpaceX facilitated the first orbital space flight of only private citizens, in association with payment processing company Shift4. The mission was in aid of raising money for a children’s research hospital in Memphis, Tennessee. Crew members – including Shift4 CEO Jared Isaacman – had extensive training over a six-month period, including a 30-hour simulation in a full-size replica.

Crew Dragon begins its journey atop a Falcon Nine launch vehicle; the two stages of separation occur within minutes of lift off, leaving the capsule on its own in space. The capsule is 9.3 cubic metres, with reconfigurable black racing-style seats in a clean, white interior. Sleek design has been considered alongside comfort and experience as well as function: a touchscreen interface replaces the switchboard; for the September flight, the docking station was replaced with a glass dome to allow its passengers a panoramic view.

The September flight did not dock with the ISS but orbited the Earth for three days, reaching an altitude of 364 miles. During this time, the crew conducted medical tests, including monitoring blood oxygen levels, heart rate and ECG activity, for research into the effect of spaceflight on people who haven’t been carefully screened and benefitted from the extensive training required of professional astronauts.

When you’re a high-net-worth individual, it’s all about being the first, trying something new

If docking with the ISS – which resides around 250 miles from the Earth’s surface and is reached within 24 hours – Crew Dragon can perform this manoeuvre autonomously. Nasa announced that the ISS was open for private space missions in 2019: it is thought to receive $35,000 for each night a tourist spends on the ISS. In partnership with Space Adventures, SpaceX will shuttle tourists to and from the ISS in a joint venture with infrastructure developer Axiom, with each seat coming with an estimated $55m price tag. The long-term plan is for tourists to visit Axiom’s proposed private space station, planned to be completed by 2030. Earlier this year, Axiom announced it received $130m in funding, and suggested that its valuation had surpassed $1bn.

The descent from the ISS takes around two days. Once the capsule re-enters the Earth’s atmosphere, travelling at a speed of around 17,000mph, parachutes deploy to assist a safe splashdown landing in the Atlantic Ocean. SpaceX has raised more than $6bn in equity to date. It has recently been valued at $100bn.

A changing landscape
Blue Origin, Virgin Galactic and SpaceX were all founded in the years following the first space tourist flight in 2001, when entrepreneur Dennis Tito became the first private space traveller. At the time, Nasa was strongly opposed to touristic space travel, objecting to the heightened burden of care placed on crews accompanied by a non-professional. As a result, Tito flew as part of a Russian mission. Daniel Goldin, then Nasa’s administrator, criticised Tito at a government hearing in 2001, claiming that he “does not realise the effort of thousands of people, in the US and Russia, who are working to protect his safety and the safety of everyone else.” On April 28, 2001, the Soyuz TM-32 mission launched with Tito on board; two days later, they docked with the international space station. Tito spent seven days, 20 hours and four minutes in space, orbiting the Earth a total of 128 times. He reportedly paid $20m.

Though much has changed in the 20 years since Tito’s flight, the barrier to entry remains high. For now, space tourism will remain the privilege of the super-rich. A 2020 Cowen survey found that 39 percent of individuals with a net worth of about $5m were interested in Virgin Galactic’s $250,000 space trip, estimating the addressable market to be almost 2.5 million people. “When you’re a high-net-worth individual, it’s all about being the first, trying something new,” Barry Shanks, director of space travel agency RocketBreaks told World Finance.

Infrastructure, from specialised travel agencies such as RocketBreaks to space ports, hotels and space stations like that planned by Axiom, will also be a key part of the landscape of commercial space tourism. Businesses such as RocketBreaks could form an important part of that infrastructure: “With the large amount of different experiences on offer, the need for a specialist travel agent will be a must,” Shanks said. Though COVID-19 saw the slowest quarter for space infrastructure since 2009, last year was the largest on record for investment in infrastructure, reaching over $5bn. In the first quarter of this year, space infrastructure companies raised a combined $3.6bn (see Fig 1). Despite numerous obstacles, from cost to safety to technological restrictions, space tourism is a sector that is set to develop rapidly over the next decade. “We are finding it’s experiences that matter,” Shanks said. “A voyage into space is a trip of a lifetime that you will never forget.”