Hyperinflation has crippled Venezuela’s economy over the past 12 months, causing a socioeconomic crisis exacerbated by Maduro’s currency policies 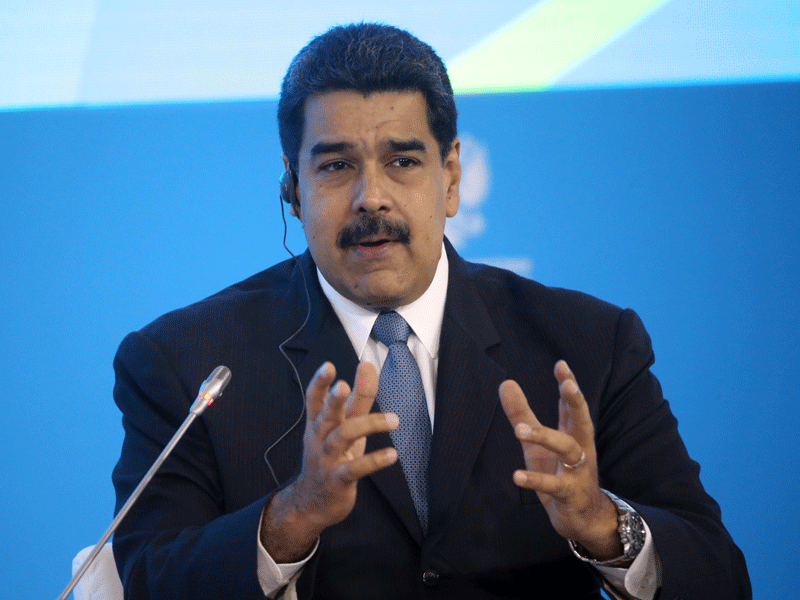 Maduro has presided over the worst economic crisis in Venezuela’s history, as rampant inflation and a rising crime epidemic drives the country into socioeconomic ruin
Featured | Markets
Author: Sophie Perryer

On January 10, Venezuelan President Nicolas Maduro began a second six-year term in power, despite an international outcry over the legitimacy of his re-election, further isolating the South American country in the iron grip of an economic and humanitarian crisis.

The 56-year-old heir of Hugo Chávez, Maduro has presided over the Venezuela’s worst economic crisis in history. The country’s economy has collapsed by almost 50 percent in the past five years, contracting by 15.7 percent in 2017 alone.

While this so-called ‘economic war’ originated under Chávez, it has been exacerbated by Maduro’s failure to cut public spending during the 2014-15 oil glut and the subsequent devaluation of the country’s most precious commodity. Maduro, meanwhile, has blamed the crisis on a capitalist plot to drive up inflation rates.

Maduro was elected after Chávez’s death in 2013 by a margin of just 1.6 percentage points, the closest vote in the country’s history. His re-election in May last year was also mired in scandal, with accusations of vote buying and corrupt electoral processes running rife.

Last week, 13 of the 14 members of the so-called Lima Group, a Latin American bloc that includes Brazil, Argentina and Canada, announced that they would not recognise Maduro as a legitimate leader of Venezuela. The most fervent critics within the bloc include Brazil’s far-right leader Jair Bolsonaro, who has described Maduro’s communist ideology as “despicable and murderous” and in 2017 vowed to “do whatever is possible to see that government deposed.”

In the US, the Trump administration has also stepped up pressure on Maduro through the application of economic sanctions. The latest measures, announced this week by the US Treasury Department, aim to curb a currency exchange scheme that allowed corrupt government officials to siphon off billions of dollars in illegal profits.

“Our actions against this corrupt currency exchange network expose yet another deplorable practice that Venezuela regime insiders have used to benefit themselves at the expense of the Venezuelan people,” US Treasury Secretary Steven Mnuchin said in a statement on January 8.

President Trump himself has also suggested that the US was prepared to use military action against Venezuela if necessary.

Most members of the Lima Group have called their diplomats home from Venezuela and will not send delegates to Maduro’s inauguration as per international custom, according to diplomatic sources.

Meanwhile, while the rest of the world turns its back on Venezuela, its citizens are desperately crying out for help. Rampant hyperinflation, currently approaching two million percent, has devalued salaries in the country to the point that the monthly minimum wage is not longer sufficient to purchase a box of eggs. The IMF expects it to rise to 10 million percent by the end of the year.

Venezuela’s Living Conditions Survey found in 2017 that 75 percent of the country’s citizens has lost an average of at least 19 pounds (7kg) over the previous year as they simply could not afford to feed themselves adequately. The same survey revealed that 87 percent of the country was living below the poverty line in 2017, with a staggering 61.2 percent classed as extremely poor.

Maduro’s response to hyperinflation has been to raise the national minimum wage, which has only fuelled the issue further, meaning that Venezuelans spending ability actually decreases with every raise. In August 2018, Maduro launched a new currency, named the ‘sovereign bolivar’, which was pegged to the state-backed petro cryptocurrency. This did nothing to solve hyperinflation, which simply began again from the base benchmark set by the new currency, while the policy drew international ire as the petro cryptocurrency is regarded as fanciful by many other world powers.

According to the United Nations, some three million people have emigrated from Venezuela since 2015, in a frantic bid to escape malnutrition and the rising crime epidemic. While Maduro’s government has repealed access to crime data and has ceased to publish official figures, research from the NGO Venezuelan Violence Observatory put the country’s violent death rate at 81.4 per 100,000 citizens in 2018. This makes Venezuela the most violent country in Latin America, with more deaths than notorious crime hotspots like El Salvador and Honduras.

As the country sinks further into socio-economic ruin, it seems increasingly less likely that it will be able to pull itself free without substantial international aid. All the while Maduro remains in power, however, there is scant chance of that aid coming to fruition. Meanwhile, the country’s impoverished citizens become ever more desperate, with malnutrition, disease and rising crime posing ever greater threats to their lives.