Walmart wants to save the world

Having suffered its fair share of criticism in the past, recent steps point towards a more responsible future for multinational retailer Walmart 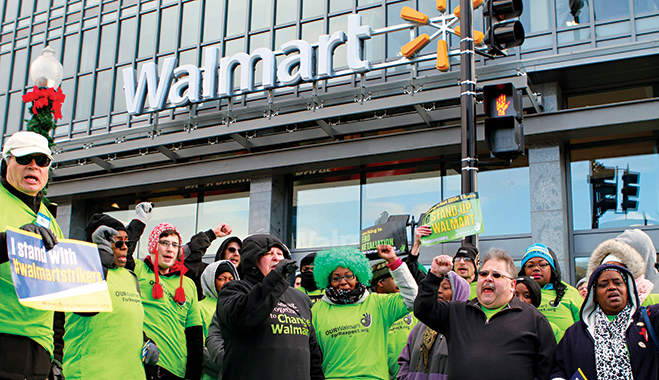 In perhaps the clearest show of the company’s failure to appease its two million-strong workforce, employees crowded outside the Manhattan pad of Alice Walton – heiress to the Walmart fortune – last October to tell of how the retailer had ‘stolen their American dream’. As shown by that and a list of similar such statements, the overriding sentiment at the Park Avenue intersection was that the corporate behemoth was failing to treat its staff with due respect.

Little over a month later, Black Friday workers staged the largest protest in Walmart’s chequered history – over 1,600 demonstrations – to highlight poor working conditions and to demand a $15 minimum wage. And while the position taken by workers succeeded in drumming up a wave of media coverage, the retailer was ultimately unmoved by the protests, after decades spent weathering incidents of a similar sort.

This is a company that has a Wikipedia page dedicated to criticisms of its various malpractices and the questionable decisions it has made over the years; one that has come up against the wrath of the US’s unskilled workforce like no other. However, it’s also one that, judging by revenue alone, would qualify as the world’s 23rd largest economy, and a business for which success depends largely on a free-spending American population – though not too free-spending.

Demonstrations against Walmart on Black Friday 2014

A new approach
With the realisation that wage growth has been stagnant for decades, corporate America is slowly waking up to the possibility that inadequate pay could be its undoing. In a bid to overturn the issue at hand, Gap, Starbucks and TJX were among the first high-profile names to raise starting pay above the federally mandated minimum, though none provoked quite the same reaction Walmart did on doing the same.

“Today, we’re announcing a package of changes in Walmart US that will kick off a new approach to our jobs”, wrote Walmart’s President and CEO Doug McMillon in a company blog post. “One of the most immediate changes is that we’ll raise our starting pay, and we’ll provide opportunities for further raises based on performance. For our current associates, we’ll start by raising our entry wage to at least $9 an hour in April, and, by February of next year, all current associates will earn at least $10 an hour.”

Despite the increase, Walmart’s decision will fail to appease all critics for as long as the minimum is short of the living wage. What’s more, some critics have drawn attention to the fact that the new rates falls far short of the competition: Costco’s starting wage sits at $12; Amazon’s at around the $10 to $12 mark. Still, the decision to boost pay represents only one part of a much wider strategy to raise the company’s profile as a responsible and forward-thinking corporate entity.

Renowned for offering products at rock-bottom prices, Walmart’s focus is and always has been on value. However, gone are the days when retailers could simply race to the bottom in order to succeed in the market, companies must now compete on more than just one front. Changing consumer attitudes mean that price is not necessarily the only determinant of what wins over shoppers, and a failure to focus on matters apart from cost could be the undoing of any one company. Politicians and consumers have piled pressure on companies such as Walmart to factor sustainability into the mix, to the point where the retailer is fast becoming a key name in the quest for greater sustainability.

The sustainability equation
Going back to 2009, Walmart contributed part of the seed funding to form ‘The Sustainability Consortium’ (TSC), whose goal is to work collaboratively in driving innovation and improving product sustainability. Formed on the basis that we, as global citizens, are forced to contend with diminishing resources and widespread abuse of human rights, and will do so increasingly as the population tips the nine billion mark by 2050, the organisation’s goal is to find sustainable solutions.

“Increasingly pressure is being felt by multiple stakeholders to reduce the environmental and social impacts associated with global consumption. Retailers, manufacturers, suppliers, governments, NGOs, researchers and consumers all hold a stake in the sustainability of global product production and use”, says TSC. Boasting a corporate membership of more than 100, including Coca-Cola, Unilever and Kellogg’s, the consortium informs decision makers in various sectors on how they can ensure products are sustainable, though the work must also come from industry leaders in each of their respective fields.

As the largest private employer on the planet, Walmart plays a pivotal role in the sustainability equation, and, without first recognising the need for sustainable products and standardisation, the retailer could struggle to keep pace with the market. The last couple of years – however harsh the criticism – are testament to the company’s willingness to exert a sustainable influence, not just for its own part, but on the global supply chain.

In April 2014, Walmart launched the Sustainable Product Expo and convinced some of the world’s leading names to ratchet up their efforts in driving both innovation and sustainability across the board. “This partnership highlights the powerful potential of private capital to encourage more efficient use of our resources while spurring local job creation and community engagement”, said John Weinberg, Vice Chairman and Co-Head of Goldman Sach’s Investment Banking Division. With food production forecast to increase roughly 70 percent in the period through 2050, according to the UN, commitments from the likes of General Mills, Monsanto, PepsiCo and more meant that the event was a resounding success.

Some 10 years after Walmart’s then-CEO Lee Scott pledged to shrink the retailer’s environmental footprint, it appears the company is beginning to take major strides by actively promoting sustainability in the supply chain. Not just concerned with its bottom line, Walmart is wielding its influence in the retail space wisely by taking the long view and ensuring others join it on the journey.

Environmental parameters
Utilising the research gathered by TSC over the years, Walmart has laid down perhaps its most significant marker so far in terms of backing sustainable products: in late February, the retailer launched its own Sustainability Leaders shop. “The Sustainability Leaders shop on Walmart.com is the first step in helping our customers identify which brands and suppliers are leading the way in sustainability”, explained Neil Ashe, President and CEO of Walmart Global eCommerce in a statement.

Realising customers are considering social and environmental parameters alongside price when perusing the shelves, the online shopping portal means they can make more informed purchases. “We’ve done the heavy lifting to empower our customers to put their money where their heart is”, said Kathleen McLaughlin, Senior Vice President of Sustainability. “The Sustainability Leaders shop gives customers the tools to make more informed choices, and it’s a great way for us to do good business.”

Still, the fact the largest retailer on the planet is engaging with ambitious sustainability initiatives gives real cause for optimism. Though the system is less than ideal, the set-up marks only the first step on the way to reducing Walmart’s carbon footprint. Provided the company follows through with its promise and continues to heed the demands of its workforce, Walmart could soon find favour even among the thousands that turned out for the Black Friday demonstrations and, in doing so, reposition itself as a global sustainability leader.