With the global arms industry reaching its highest trade volumes since the Cold War, the sector moves towards its own distinct form of globalisation 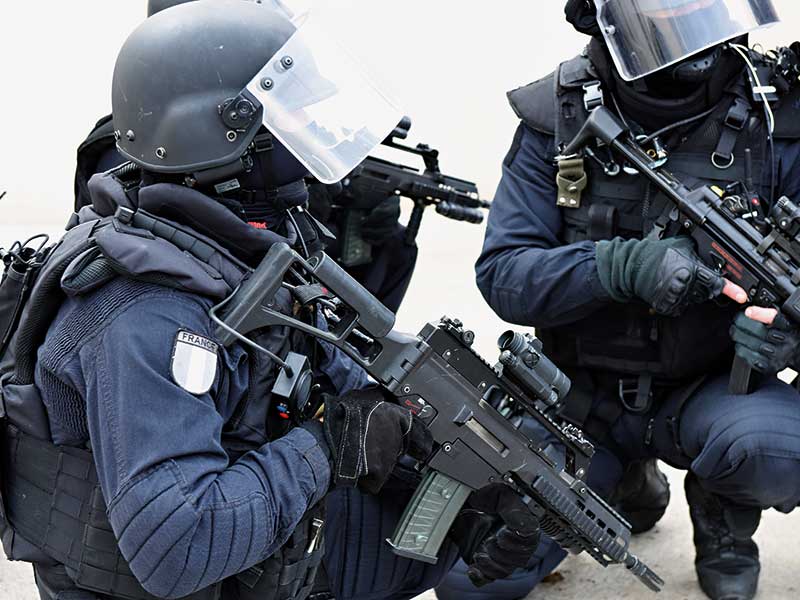 The volume of international arms transfers has been on an upward streak since 2009
Markets
Author: Kim Darrah

While the post-recession world has seen dented trade volumes and a retreat from globalisation, the global arms industry has managed to buck this trend by exhibiting a relatively sturdy upwards momentum in trade volumes since the early 2000s. According to data from the Stockholm International Peace Research Institute (SIPRI), transfers of major weapons in the period from 2012 to 2016 reached their highest volume for any five-year period since the end of the Cold War, and were up 8.4 percent from between 2007 and 2011.

Patterns seen in the global arms trade provide a window into the state of global conflicts: trade volumes swell with each major war, while trade channels provide a snapshot of a complex web of global alliances. Beyond this, factors like oil prices and economic growth play a critical role by influencing states’ appetite for arms expansion. The recent uptick in volumes of weapons being traded, however, also reflects an increasing proportion of military spending being channelled towards weapons imports, implying weapons are made increasingly for the purpose of being sold abroad.

Illustratively, global military expenditure has largely plateaued since 2009, during which time the volume of international arms transfers has been on an upward streak. Much of this can be explained by demand driven by individual conflicts and threat perceptions in nations without domestic production capacity. For instance, Vietnam, which borders the South China Sea, increased its weapons imports threefold between 2012 and 2016 from the four years prior. Meanwhile, Saudi Arabia, embroiled in an expensive conflict in Yemen, increased its purchases by 212 percent.

Shifts in the way weapons move around the world reflect the changing shape of an increasingly concentrated, technologically advanced and specialised weapons manufacturing industry

Yet conflict itself is just one side of the story. Shifts in the way weapons move around the world also reflect the changing shape of an increasingly concentrated, technologically advanced and specialised weapons manufacturing industry. Between 2012 and 2016, SIPRI identified 57 countries as exporters of major weapons, but the five largest suppliers made up the vast bulk of sales: together, the US, Russia, China, France and Germany were responsible for 74 percent of all arms exports (see Fig 1).

The industry has always been highly concentrated among certain ‘top tier’ suppliers, but figures from SIPRI show this is becoming increasingly the case, with the top five exporters from 2012–16 exporting 8.5 percent more arms than the countries comprising the top five in the previous five-year period.

Indeed, SIPRI’s figures are in part reflective of the weapons industry’s own particular brand of globalisation. Alongside greater volumes of trade, developments over recent years have seen it evolve into an increasingly globally intertwined and hierarchical industry, with multi-domestic firms and international collaborations becoming the norm.

A scissor effect
According to Jennifer Erickson, Assistant Professor of Political Science and International Studies at Boston College: “In some ways, globalisation has characterised – and influenced – the evolution of the global arms trade since the end of the Cold War. In other ways, there is more continuity than you might expect.” One of the key features of the arms industry is that it moves very slowly, with shifts in production capacity or trade relationships taking a long time to concretely materialise.

That being said, the dramatic reduction in funding for defence after the Cold War forced firms in the sector to change their strategy. Erickson explained: “Since governments were spending less on defence procurement, this meant that the global arms market shrank, with significantly more competition among defence companies for their customers. As a result, defence companies were subject to intense economic pressures to consolidate, export and specialise in order to survive.”

The reduction in funding came in combination with growing technology costs required for evermore sophisticated weapons systems, making it increasingly untenable to maintain small scale production lines. Together, these forces created a ‘scissor effect’, whereby the development of integrated global linkages and operations became crucial to survival. This prompted a wave of mergers and acquisitions, which began on a domestic level – but when domestic demand was saturated, firms sought cross-border consolidation. The result is the concentrated and hierarchical sector seen today, with the emergence of defence giants that have consolidated their business through new partners and subsidiaries. According to Erickson: “Trends in specialisation and hi-tech weapons systems have also meant that, among the advanced industrial democracies, weapons production has become much more interdependent than in the past. Supply chains for a weapon produced in a single country like the United States involve numerous companies, both foreign and domestic.

“As a result, the production of a single weapon can entail a globalised supply chain, even before it might be sold and exported on the global arms market. The production of some weapons might also be completed in multiple countries. The F-35 Joint Strike Fighter, for example, has been a deliberate effort to globalise production among its investor countries.” Therefore, even as the volume of cross-border trade shrank after the Cold War, the scissor effect forged a new global character that persists in the industry today.

An increasingly consolidated and specialised industry can also create added pressure for producers to export, because domestic weapon demand – particularly for European countries – cannot always support large-scale production lines. “Shutting down a production line means that you lose out on capacity, and rebuilding that capacity is über expensive – it is as expensive as building it up from scratch”, said Aude Fleurant, Director of the Arms and Military Expenditure Programme at SIPRI. Often reluctant to forego domestic capacity, countries tend to fall back on exporters to soak up the excess capacity created by large scale production lines. This effect means export competition can be fierce.

The result of this process of globalisation and consolidation is that the industry is morphing into a huge ‘hub and spoke’ model. This has been described by Richard A Bitzinger in his book Towards a Brave New Arms Industry? as consisting of “a few large first-tier firms at the core, serving as centres for excellence for weapons design, development systems and integration, with global supply chains extending out to second-tier states on the periphery”.

Evading the invisible hand
“If you also associate globalisation with free trade, then globalisation does less well in characterising the global arms trade”, Erickson noted. In this sense, the arms sector obeys its own logic, making its particular brand of globalisation distinct from that seen in civilian sectors.

As Fleurant said: “It is the last market for which there [is] no WTO [World Trade Organisation] free trade in position. It is one of the last markets that is protected at the state level – that can be subsidised.” Indeed, the sector gains its divergent character as a result of the WTO’s ‘security exception’: a proviso ensuring activities in the military sphere, including government research and export subsidies, are shielded from challenges under WTO rules. The security exception therefore allows governments to intervene in the market as they wish if it is deemed to be in the interest of national security.

As a result, the trend towards a more globalised weapons industry is markedly different from the globalisation seen in traditional sectors. Instead of trade flows being increasingly dictated by the ‘invisible hand’, a state has free rein to support its domestic weapons industry through tax breaks, subsidies and import restrictions.

Unlike globalisation in traditional sectors, a state has free rein to support its domestic weapons industry through tax breaks, subsidies and import restrictions

While the security exception holds back free trade in its purest sense, it simultaneously has the effect of propping up the sector. For instance, when a WTO ruling deemed Canada’s subsidies to aircraft manufacturer Bombardier to be illegal, the Canadian Government responded by shifting its support to the military arm of the company in order to dodge the ban. As a result, if heightened trade tensions prompt further challenges to be made through the WTO, more countries may utilise this exception by shifting state protectionism to the military sector.

The exception can also encourage greater concentration in the sector, due to the fact that the arms industry is bolstered in those countries with large defense budgets.

Beyond this, there are a number of restrictions and embargoes that will forever hold back the free movement of weapons. However, measures to contain the trade of weaponry are often surprisingly meagre. For instance, the first attempt to regulate the industry at a global level – the UN’s Arms Trade Treaty – has not yet been ratified by China, Russia or the US, which together form the bulk of global sales.

Thomas Friedman famously described globalisation as the “flattening” of the world economy through globalised trade, outsourcing, supply chaining and political liberalisation. Owing to the heavy hand of the state and the ever-present significance of borders in the arms industry, this is one area where the world is certainly not flat. Weapons companies will never quite emulate the freedom of those firms in heavily globalised industries, such as telecommunications or textiles. And yet, the arms sector’s post-Cold War transformation and recent surge in trade volumes illustrate the fact the sector is certainly not immune to the forces of globalisation.