China vs India: the battle for supremacy

India and China are on course to become the world’s two biggest economies by 2050. In their battle for supremacy, smaller countries like Bangladesh should be wary of becoming pawns in this power struggle 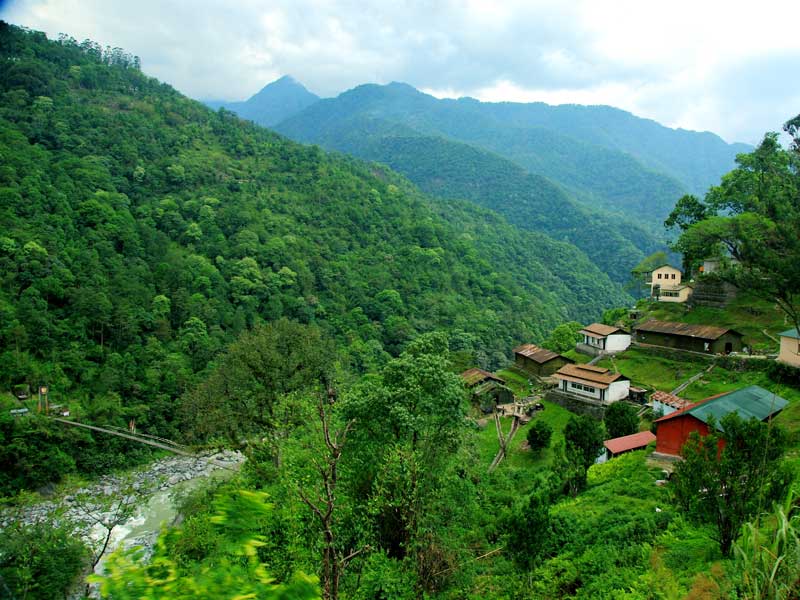 India and Bangladesh are engaged in an ongoing dispute over what percentage share Bangladesh should get of the Teesta River
Strategy
Author: Barclay Ballard

On the surface, the recent visit by Indian Foreign Minister Sushma Swaraj to Bangladesh was simply the latest development in the two countries’ improving relations. The announcement that India will fund 15 huge development projects across Bangladesh worth BDT 720m ($8.5m) is not particularly noteworthy: Bangladesh is the single biggest recipient of aid from India and, back in October, the two countries shook hands on a $4.5bn credit line, the largest provided by India to any country. India’s investment, however, is likely to entail much more than simply improving the prospects of its eastern neighbour. Despite closer ties between Dhaka and Delhi, Bangladesh’s biggest trade partner is not India, but China. What’s more, China has planned development projects of its own within Bangladeshi borders, including a $133m deal to revamp the national government’s IT network.

Although some view India’s growing military and economic strength as a counterbalance to Chinese regional power, Beijing views it as a provocation

Although China and India are neighbours, they are also economic rivals. China is currently the second-biggest economy in the world, while India is the seventh. By 2050, they are predicted to occupy the top two spots. Territorial issues between the two countries persist in the Aksai Chin and Arunachal Pradesh regions. Although some view India’s growing military and economic strength as a counterbalance to Chinese regional power, Beijing views it as a provocation.

As the battle for regional supremacy intensifies, government investment is just one way a country can increase its influence, but one that is already proving fruitful for China in Asia, Africa and the wider world. In Bangladesh, India is fighting back, in the hope that improving relations will help counter Beijing’s march towards regional hegemony.

Investing in influence
The launch of 15 Indian-assisted development projects in Bangladesh exemplifies the close economic ties between the two neighbouring countries. The investment will cover a wide range of sectors including healthcare, education, IT and water supply. The construction of 11 new water treatment plants is planned for the country’s Pirojpur district, while 36 community centres will be built and the Ramna Kali Temple, destroyed by Pakistani forces in 1971, will also be restored.

The announcement of the projects follows an investment offer of $10bn made by India in April, focusing on infrastructure and medicine. With more than 30 percent of the population living in poverty and energy supplies proving unreliable, foreign investment is sure to be welcomed by the Bangladeshi Government.

In reality, boosting development in the region is sure to prove mutually beneficial for both India and Bangladesh, which is why the planned infrastructural projects are being given such prominence. Growth and financial stability will help stem Islamic radicalisation in Bangladesh, providing security benefits for its larger neighbour too. Improving relations between the two countries also ties in with India’s
wider strategic aims in South Asia.

The Neighbourhood First initiative is one of the most significant policies introduced by Indian Prime Minister Narendra Modi since he came into office in 2014. Building on the country’s two-decades-old Look East policy, and its successor Act East, the scheme aims to improve India’s diplomatic ties with neighbouring countries, which also include Pakistan, Bhutan, Sri Lanka, Nepal and Myanmar.

Asma Masood, Research Officer at the Chennai Centre for China Studies, believes India’s investment projects in the region will improve the country’s relations in a number of spheres relating to geostrategy, the economy, energy, connectivity and cultural development. By working with its neighbours, India’s progress will be much improved compared with if it pursued a more isolationist bent. “India is set to become the world’s third-largest economy by 2028, and the second-largest by 2050,” Masood said. “These milestones cannot occur in a vacuum of domestic development alone, nor only via relations with the developed world. Similarly, Act East needs to go hand in hand with Neighbourhood First. India is acknowledging the fact that its economic rise is linked to that of its neighbours, including Bangladesh. The region must be looked upon as India’s South Asian family whereby the immediate relatives deserve top priority.”

Although India-Pakistan relations remain troubled, India developed positive relationships with many of its other bordering states through the Neighbourhood First initiative. This can be witnessed through the Kaladan Multi-Modal Transit Transport Project in Myanmar, as well as the Bangladesh, Bhutan, India, Nepal Motor Vehicle Agreement.

India has long struggled to create strong ties with its surrounding countries as a result of foreign policy missteps and an emphasis on bilateralism in place of a broader regional framework. Under Modi, however, this is beginning to change. In Bangladesh in particular, large amounts of investment have strengthened India’s diplomatic ties. As Swaraj said at the announcement of the 15 development projects: “India is following a policy of ‘neighbours first’, and among the neighbours Bangladesh is foremost.”

It’s complicated
The relationship between India and Bangladesh may be enjoying its best period in history, but that doesn’t mean the two countries see eye-to-eye on everything. Water sharing from the Teesta River has still not been formalised, Bangladesh’s trade deficit with India is growing, and the border between the two countries remains one of the most dangerous in the world. Of greater significance, however, is a third-party increasing the complexity of the situation: China.

India and China have had a fractious relationship for a number of years. In 1962, the Sino-India Border Conflict resulted in military hostilities between the two countries, but recent conflicts have amounted to little more than a war of words. An essay written in 2009 by the China International Institute of Strategic Studies perhaps best sums up the disrespect that is often displayed towards India by Beijing. In it, the historical basis for a united India was disputed, suggesting that China should encourage the break-up of India into 20 to 30 independent states.

If proposals to weaken India are borne out of Chinese contempt, they are no doubt solidified by concerns over India’s growing economic and military might. In order to rein in India’s potential, China has invested in a network of military and political influence in the countries immediately surrounding India: China’s so-called String of Pearls. This includes the Gwadar Port in Pakistan, a deep-water port in Kyaukpyu, Myanmar, and the $1.1bn construction of the Hambantota Port in Sri Lanka. The String of Pearls appears to be as much about hampering India’s regional power as it is bolstering China’s.

Boosting defence
Bangladesh, too, is now dotted with pearls of Chinese investment, predominantly in the form of infrastructure projects. The 4.8km-long Muktarpur Bridge, which was inaugurated in 2008, was constructed with $17m of Chinese money and is the sixth bridge in the country to receive funding from Beijing. Power plants, motorways and transport terminals are all planned for the future. Masood believes that another way that China is making its economic presence felt in Bangladesh is through military support. Here, the complex relationship network in the region means that this is an area in which India has struggled to make inroads. “China is a top supplier of military hardware to Bangladesh,” Masood said. “The two countries’ strong defence ties are partly the result of security concerns that Dhaka has regarding Myanmar. China can advance defence hardware deals with Bangladesh without riling Myanmar, as the latter is inextricably linked to Beijing. India, however, cannot surge ahead in military ties with Bangladesh for fear of upsetting Naypyidaw [Myanmar’s capital]. Thus China appears to use power play to its advantage in the region.”

When the prospect of boosting defence cooperation between Bangladesh and India arises, critics are quick to question whether it is in Bangladesh’s best interests. They argue that pivoting towards Delhi could damage relations with China and discourage future military investment. When geopolitical ties are as tangled as they are in South Asia, befriending one state could anger another.

Caught in the middle
When evaluating the competing interests of India and China, it’s important that Bangladesh is not forgotten. Being involved in a tug of war between two emerging superpowers is not likely to do much good for a country that has suffered its fair share of instability in the recent past, whether a result of its fragile democracy or Islamic militancy. Provided neither Beijing nor Delhi have any ulterior motives, Bangladesh could stand to benefit hugely from direct investment supplied by both India and China. However, there is a cautionary tale that Dhaka would do well to heed.

As regional ties become closer and more complicated, it is essential that Bangladesh preserves its own interests

There was much fanfare when the Hambantota Port was opened in 2010 along Sri Lanka’s south coast. The port, which was financed through Chinese loans, was supposed to bring economic growth to the region and relieve pressure on the Port of Colombo. Instead, the project looks as though it will turn out to be a geopolitical masterstroke on China’s part.

With the port failing to turn a profit, the Sri Lankan Government found itself unable to repay its loan obligations and was left with little choice but to cede control of Hambantota in exchange for a $1.1bn debt write-off. Now, China Merchants Port Holdings, an arm of the Chinese Government, owns the port for the next 99 years. The development has raised concerns about how Chinese investment could threaten national sovereignty in the region’s other countries.

Strategic benefit
There is reason to believe, however, that India’s investment projects are more benign than those being implemented by Beijing. With Bangladesh sharing a border of more than 2,500 miles with its larger neighbour, the mutually beneficial impacts of infrastructural development and economic stimuli are more obvious. If the purchasing power of Bangladeshi citizens increases
then it’s highly likely that demand for Indian products and services will too.

“India presents no threat to Bangladesh,” explained Masood. “Dhaka is witnessing, as seen in the recent investment and development moves by India, that Delhi seeks to cooperate with its eastern neighbour to achieve shared aspirations of regional connectivity, economic prosperity, cultural harmony and geostrategic stability.”

India’s imports from Bangladesh grew by six percent on average between 2012 and 2016, even as its imports fell globally. The relationship between the two countries is clearly of growing economic significance, but China’s interest in the country is less clear-cut. “Dhaka would do well to remember that evidence points to China making smaller countries economically dependent on Beijing,” Masood said. The strategic benefit of growing China’s presence in the Indian Ocean is also difficult to deny, either in trade or military terms.

As regional ties become closer and more complicated, it is essential that Bangladesh preserves its own interests. Cooperation with the region’s major powers could accelerate the country’s upward progression, but Dhaka

should be wary of undue influence from more powerful neighbours. As the power struggle between India and China develops, Bangladesh should ensure that its own sovereignty and economic development does not come under threat. Investment from the two countries should be welcomed, but not at any cost.