George Osborne’s 2014 Budget has been met with mixed reaction. Finance journalists Sandra Kilhof and Rita Lobo weigh up the case for and against the election-year announcement 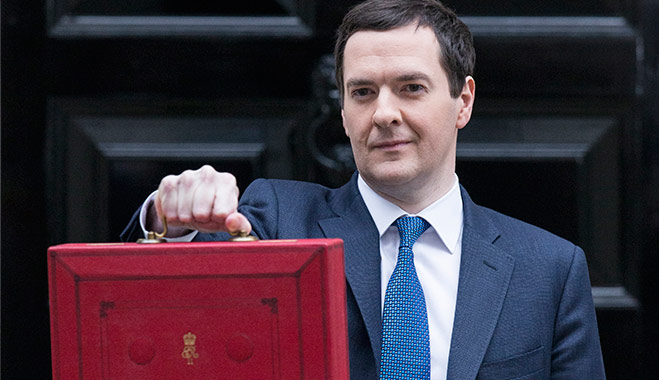 The Chancellor of the Exchequer George Osborne, holding the budget box, stands outside Number 11 Downing Street on March 19. As always, the latest budget has divided voters
Government policy

FOR: A budget for the makers, doers and savers

UK Chancellor George Osborne wooed pensioners and savers when he announced the budget for 2014 and unveiled the biggest shake-up of the pensions and savings area in a decade. The plans are good for the government, which is looking to gain voters’ confidence ahead of the elections next year. What’s more the increased freedom on savings and changes in tax brackets could give the UK economy a much-needed nudge upwards.

Osborne’s proposals will give people far more freedom to choose what they do with their pension pot. A key part of the plan is cutting the amount of guaranteed income people need in retirement to access their savings, from £20,000 to £12,000; increase the amount of total pension savings that can be taken as a lump sum, from £18,000 to £30,000; increase the capped drawdown withdrawal limit from 120 percent to 150 percent of an equivalent annuity, and raise the maximum size of a small pension pot which can be taken as a lump sum from £2,000 to £10,00, as well as increase the number of personal pots that can be taken under these rules from two to three.

Crucially, savers wanting unrestricted access to their pension pots will be taxed at the average marginal rate of 20 percent, instead of 55 percent under Osborne’s plans.
With the move, Osborne is hoping to encourage savings significantly by removing rules on often-criticized annuity purchases. Essentially, this gives pensioners the opportunity to access their pensions savings whenever and however they wish, from the point of retirement, instead of turning their savings into a guaranteed lifetime income in the form of an annuity.

What’s more the Conservative/Liberal Democrat government proposed that Individuals Savings Accounts – a long-standing form of tax-advantaged mass-savings products in the UK – be simplified, with an overall tax-free savings limit of £15,000 per year as of 1 July. This is good news for savers who can currently only invest £5,760 a year into a cash ISA or £11,520 in stocks and shares ISAs.

The idea is intended to give savers more flexibility on how they invest and is estimated to benefit more than six million people currently constrained by their cash and equities limits in ISAs.

The budget also signalled good news for the mass affluent, who will now be exempt from income tax, as a result of the decision to increase the personal allowance. Osborne has previously announced that in the 2014 – 2015 tax year, workers will be allowed to earn up to £10,000 before being liable for income tax.

With the newest budgetary changes, workers can earn up to £10,500 before having to pay tax as of April 2015 – giving people more money to spend and thereby boost the recovering UK economy.

The impact will most likely be significant as the Treasury estimates that it could take 288,000 people out of the income tax bracket in 2015-16, and that 25 million taxpayers will benefit as a result of the tax changes, typically saving £100 a year each.

Finally, Osborne made an unpopular, but necessary choice relating to the taxation of non-UK residents. By extending the tax regime on “high-value” residential property worth more than £500,000, instead of the previous limit of £2m, the Chancellor is targeting enveloped dwellings that could bring in an annual tax of £3,500 or £7,000.

Critics suggest that the tax could hurt individuals with little or no wealth, as property valuations in London especially, have risen. However, it is worth keeping in mind that the new tax is targeted at residential properties owned by companies, not individuals, and that said tax is being implemented at a time when the state of UK public finances still leave much to be desired. Alternative cuts could have impacted welfare spending for instance. In this respect, higher tax on residential property is a far less controversial way of generating much-needed income for the state budget.

Against: The problem with the budget

Perks for old Tory faithfuls and scraps for the poor; this was indeed an election year budget, writes Rita Lobo

A lot has already been said about George Osborne’s silver savers budget. Reviews have been – predictably – mixed. There is very little question about what Osborne’s priorities were when it came to hand-outs, though, and no one should be surprised that those getting the best deal will be the most faithful Tory supporter: wealthy older people.

For the wealthier echelons of the population it is an inebriating concoction of tax breaks, and leg-ups

Gideon’s ‘pension revolution’ might have been unexpected, but after some reflection it seemed like an obvious direction for him to take. This is the last budget before election year, the time to woo those Conservative voters who have been flocking to those eager Ukip shores. Coupled with Osborne’s insistence on bringing down the public debt to GDP ratio to pre-crisis levels before the election, and the result is a potentially fatal cocktail. For the wealthier echelons of the population it is an inebriating concoction of tax breaks, and leg-ups.

Osborne said it himself: “If you’re a maker, a doer or a saver: this budget is for you.” If you are unemployed and young, keep walking – there is nothing to see here.

Allowing savers to unlock their pensions and invest the money themselves is not without its merit, but it is also an opportunity for wealthier people to invest their money with no tax liabilities. The policy will clearly benefit wealthier pensioners more than anyone else, and Ed Balls, the Shadow Chancellor was right to question if there would be sufficient and adequate protections and education to prevent less experienced investors from squandering away their life-savings.

For lower income families, the news was not quite as generous, £0.01 off the pint of beer and a reduction on the tax for bingo, were the highlights. No plans were announced on how to boost youth employment, stuck in the doldrums for the past few years.

Analysts at the Institute for Fiscal Studies already suggests that 300,000 more children are living in poverty in the UK now than in 2010, and that number is set to soar by an addition 150,000 before the current parliament winds down. Osborne announced to measures to mitigate this drop in quality of life. In fact, his welfare cap will probably only help spread poverty, than lift people out of it. The welfare cap locks in the cuts for good, and ensures that people will continue to struggle with no jobs and no safety net.

There was good news in the budget. There are strong measures to tackle tax avoidance on an unprecedented scale, and the deficit is coming down- albeit much slower than Osborne would’ve liked. But it is an election year budget through and through: courting voters with nonsensical measures, and leaving the disengaged poor and youthful to fend for themselves.