EU finance ministers say G20 countries will miss their ‘2-in-5’ growth targets for 2018, but will continue to implement structural reforms 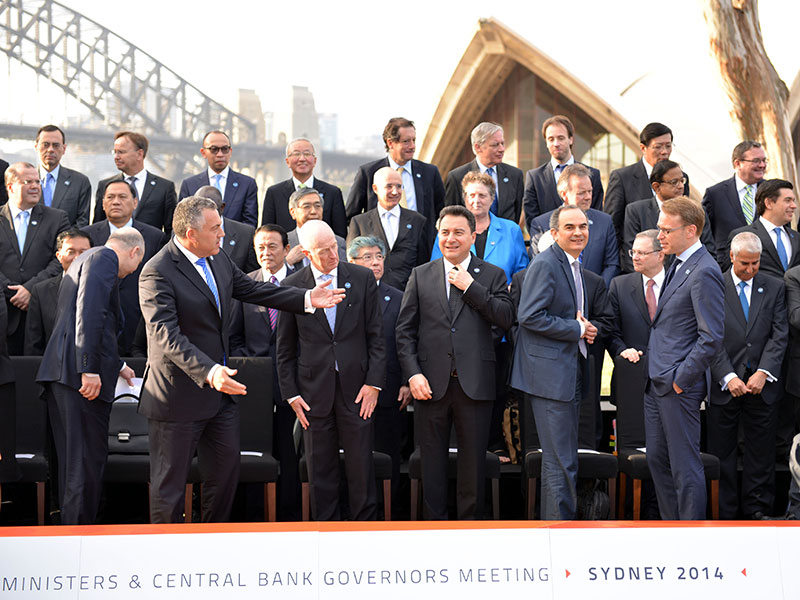 G20 finance ministers in Sydney, Australia in 2014, the same year in which the group's ambitious growth targets for 2018 were set
Government policy | Infrastructure
Author: James Stannard

On April 8, it emerged the world’s 20 biggest economies will miss their ‘2-in-5’ growth targets by 2018, according to a terms of reference document released by EU finance minsters. The document also said structural reforms will continue despite the failure.

The revelations will be discussed in full at a G20 finance ministers’ summit in Washington at the end of the month.

The targets in question were set by the G20 three years ago. Member countries promised to grow their economies by two percent over the following five years through reforms and targeted investments, with a final goal of adding more than $2trn to the global economy.

Today’s global outlook is much less optimistic than it was in 2014, when the 2-in-5 targets were originally set

According to the document: “We should reflect on the appropriate communication around our 2-in-5 objective and build a shared assessment and understanding of why we have not fully delivered… It is thus vital to accelerate the implementation of structural reforms and of investment in productive infrastructure.”

Rising protectionism was a significant threat to global economic growth in the early months of 2017. In March, G20 countries backed down from their hard line against trade barriers at a meeting in Baden-Baden. While they noted trade is important to the global economy, they caused shockwaves by dropping their prior commitment to “resist all forms of protectionism”. US President Donald Trump’s anti-globalisation stance was widely blamed for the change of wording.

Other factors have changed the playing field since the G20 targets were set. According to analysts from forecasting group Focus Economics, the UK’s vote to leave the EU in 2016 combined with the rise of protectionist politicians in France and the Netherlands has caused further uncertainty.

There are also longer-term causes of the G20’s failure to hit its targets. UBS reported in mid-2016: “Monetary policy is no longer as supportive of growth as it was several years ago. For many developed economies, monetary policy has been used to the point of exhaustion where interest rates have been cut so aggressively that diminishing returns have now set in.”

The global economy made a relatively good start to 2017, propelled by momentum from the prior quarter. What’s more, G20 countries like China and India are set to continue posting strong growth figures for the next few years. Nonetheless, whether global growth will continue on this brief upward swing is somewhat doubtful given the protectionist measures that continue to emerge worldwide and general uncertainty regarding the Trump administration’s capacity to implement fiscal reforms. As such, today’s global outlook is much less optimistic than it was in 2014, when the 2-in-5 targets were set.