How powerful is Donald Trump?

US President Donald Trump has peddled an economic plan predicated on ‘thinking big’ and putting America first. But how far will he be able to go? 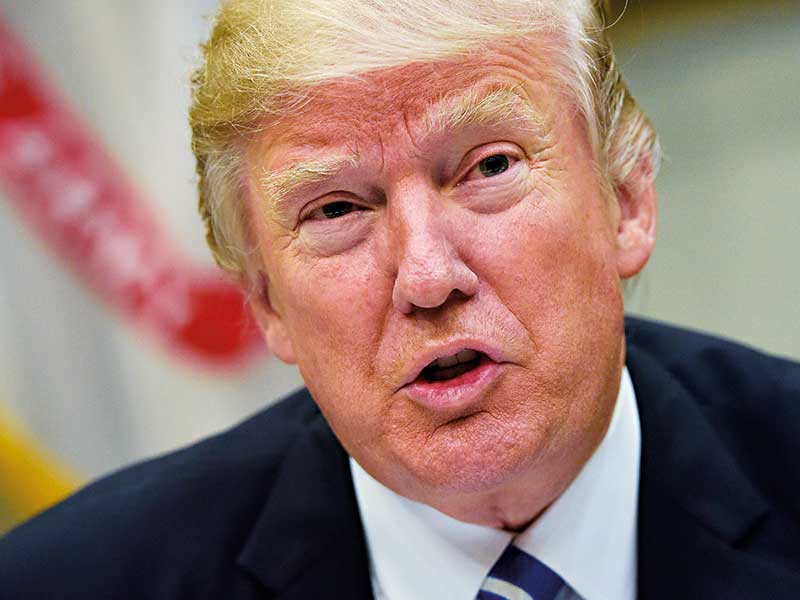 Trump has gone to great lengths to cast himself as fast acting and all powerful
Government policy | Infrastructure
Author: Kim Darrah

In 1952, President Harry S Truman sat at his desk in the Oval Office and mused about what was in store for his successor, Dwight D Eisenhower. “He’ll sit here”, said Truman, tapping his desk for emphasis, “and he’ll say, ‘Do this! Do that!’ And nothing will happen. Poor Ike – it won’t be a bit like the army. He’ll find it very frustrating”.

This moment has been immortalised by political scientist Richard Neustadt, who argued in his seminal book Presidential Power and the Modern Presidents that the President of the United States is not as powerful as many might believe. In fact, he deemed the office of the US president to be plagued by weakness, arguing that a president can only get his way by eliciting the cooperation of other powerful players in the system. Thus, rather than simply making commands, a US president can only enact his agenda by playing a delicate game of persuasion, bargaining and conciliation – a game that requires extensive experience in the machinery of government.

This comment on the strength of checks on a president’s power is damning for Donald Trump, whose business background as the unitary leader of the Trump Organisation has left him accustomed to his word carrying the weight of an order. It may, however, be comforting to those concerned that certain aspects of the unpredictable businessman’s economic strategy could do real damage.

John Hudak, Deputy Director of the Centre for Effective Public Management and a senior fellow in governance studies, told World Finance: “Being sensitive to the realities of the Congress as a coequal branch is something that every president needs to do… I think that [Trump] is going to be floored by the limitations on his ability to execute the policies that he wants, and this is something that we are absolutely already seeing.”

Fixing America, alone
Despite having next to no experience in politics, Trump has gone to great lengths to cast himself as fast acting and all powerful, making a grand claim upon receiving the Republican nomination: “I alone can fix [America]!” He invokes his business background to present himself as someone who is an expert in “thinking big” and “getting stuff done” – and yet, his impulsive style of announcing grandiose policy measures has left many concerned about the possible implications of his leadership of the world’s largest economy.

For one, Trump’s signature ‘America first’ stance has drawn wide-scale criticism from economists, who generally see global trade as a positive-sum game. Many have warned of the economic costs to business, growth and productivity that could ensue as a result of Trump’s planned return to protectionism, particularly given the possibility of an all-out trade war if international tensions escalate.

Furthermore, his proposition for a vast fiscal stimulus package has drawn criticism for being introduced at a time when the economy is already nearing full employment, as well as for its inevitable implications for national debt. Notably, both of these policies go against the sway of Trump’s own party, which is traditionally pro-trade and fiscally conservative.

Trump’s flurry of executive orders at the start of his term certainly showed he has a taste for unilateral action, as he followed through on many campaign promises that commentators had predicted he might let slide. However, despite his strongman image, he cannot single-handedly command the full breadth of his economic plans with the swipe of a pen.

Presidential power
The US Constitution artfully plays the three branches of government against each other in a system of shared powers, created explicitly to ensure no single branch could become too powerful. In theory, US Congress alone has the power to create laws, while the president’s role is simply to ‘recommend’ legislation – as well as to veto it as he wishes. This system substantially checks the president’s power, especially as Congress is not obligated to play ball with a president’s agenda.

The system also elucidates the source of Truman’s frustrations as he sat at his desk all those years ago. In order to implement his crowning achievement – the Marshall Plan – Truman had to perform a complicated bargaining game, building a coalition in Congress through a long-winded strategic process of gaining loyalties and amassing political capital.

This said, over recent decades, the scope of presidential power has been stretched and expanded in various capacities, with some presidents relying heavily on executive orders to act alone, without the approval of Congress. This has been the subject of considerable controversy, with some arguing the president’s office has become overly powerful. Roosevelt, for example, issued a massive 3,522 executive orders over the course of his presidency. Nixon, in comparison, issued 346, Bush 291, and Obama 276. The nature of such orders varies massively, but some have had extensive implications for policy.

Of course, the Constitution ensures the scope of executive orders has boundaries. Indeed, members of Trump’s own party have felt the need to emphasise that he will be constrained from overstepping his limits.

The scope of presidential power has been stretched… with some presidents relying heavily on executive orders to act alone, without the approval of Congress

“I still believe we have the institutions of government that would restrain someone who seeks to exceed their constitutional obligations”, Senator John McCain was quoted as saying in The New York Times. “We have a Congress. We have the Supreme Court. We’re not Romania – our institutions, including the press, are still strong enough to prevent [unconstitutional acts].”

Rather than giving presidents full reign over policy creation, executive orders work within limits that are largely set by Congress. The specific scope of a president’s ability to act unilaterally varies depending on the agenda item. World Finance spoke to Manfred Elsig, Professor of International Relations from the World Trade Institute, about Trump’s signature policy issue: trade. He explained: “Generally, when we are talking about tariffs, the prerogatives are with Congress. But over time, Congress has delegated certain powers to the president.”

Thus, while the powers to levy tariffs officially lie with Congress, a series of scenarios allow the president to single-handedly levy them. One example is the Trading With the Enemy Act of 1917, which allows the president to regulate, prevent or prohibit the importation of any good during times of ‘national emergency’.

From a common sense perspective, this would be difficult for Trump to invoke with regards to levying trade tariffs on countries such as China. However, there would be precedent for such an act: in 1971, President Nixon used the Korean War (which effectively ended in 1953) to justify the brash move of imposing tariffs of 10 percent on all imports. Even so, Elsig emphasised that, in drawing on this delegated power, Trump would be on “legally shaky ground”, and could be taken to court for acting outside the scope of his constitutional powers.

Cowed by Congress
This is not the only way Trump’s taste for invoking his executive power could run in to difficulties. Hudak emphasised that, even if Trump stays within the limits of his presidential power, he could still spark tensions with Congress: “There are responses even to those unilateral powers… Congress can reject what the president is doing in many circumstances. And you will see that that will be part of the norm if Donald Trump starts to disrupt global capitalism.”

Furthermore, the bulk of Trump’s broader plans would have to be formally ratified by Congress, including a wider tariff plan, a new deal with NAFTA, a fiscal stimulus, deregulation and tax changes. Across such rulings there will be plentiful instances when Trump’s agenda diverges from the interests of his party.

Hudak explained: “When someone from the party proposes something that is outside the mainstream of that party, then it is very difficult to get through. That is true if it’s a freshman Congressman or the President of the United States. And so, as the President begins to push policies that may be more liberal – like his views on trade – he is going to run into a brick wall in Congress.”

While Trump is working with a Republican majority, he must contend with the fact that his own party is notoriously pro-business. Many aspects of the President’s programme will appeal to them for this very reason – for example, deregulation, and corporate and income tax cuts will likely be well received – but many of his policies are alarming to the business community: in particular, his protectionist approach to trade and immigration, which is coupled with the added uncertainty that accompanies his erratic temperament.

Hudak told World Finance: “I think that at some point in the near future we are going to see that tension come to a head – we are going to start to see the business community work their very well developed and powerful connections with Congress in order to get to the president.”

Another key example of where Trump’s policies diverge from Republican orthodoxy is his plan for large-scale fiscal stimulus. Promises of extensive tax cuts together with a stimulus package were responsible for a rally in the dollar upon Trump’s election victory, yet Republicans have always been keen to rein in public spending. While his full plans are yet to be clarified at the time of going to print, the experiences of his predecessor do not bode well for Trump. According to Hudak: “President Obama, in the deepest days of the Great Recession, with a supermajority in the Senate and a tremendous majority in the House, couldn’t even get a trillion dollars in the stimulus bill.”

Ultimately, Trump’s promises and policy ideas must be approached with an emphasis on the context in which he finds himself, as well as his style of executive leadership. While his big character and unpredictable ‘rule by Twitter’ approach have instilled a new kind of uncertainty towards the US economy, he will soon realise his actions can trigger powerful reactions – and that there is only so far he can take his agenda alone.