The economics of populism

Today’s populist parties don’t claim a spot on the traditional economic spectrum, but this position blurring is causing ideological rifts between supporters 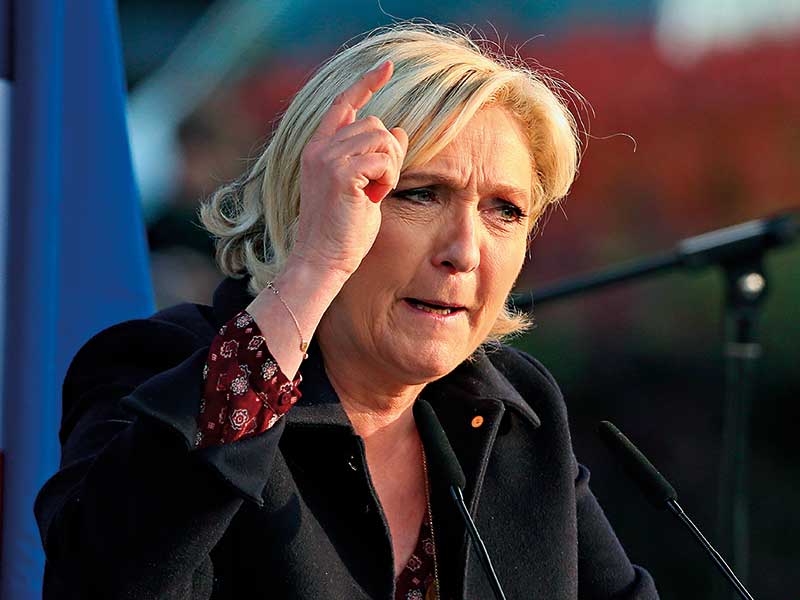 As the newly elected French President Emmanuel Macron addressed an ecstatic crowd on the night of his election victory, he said: “I would like to say a word to those who voted for Marine Le Pen.” When boos and whistles emerged from the crowd, Macron responded: “No, don’t boo them… They have expressed today their anger and dismay, and sometimes convictions. I respect them. But I will do everything I can in the next five years so there is no reason to vote for extremes.”

This kind of conciliatory approach towards a party that was once dismissed by the mainstream for being racist, homophobic and anti-Semitic has become the new normal in Europe. In fact, the French election was an archetypal snapshot of the tense political setting across the continent, whereby centrist parties, faced with a potentially destabilising political force, have begun to accommodate the priorities and sentiments of the far-right into the mainstream political conversation.

The pendulum swings
Indeed, similar stories are playing out across the continent. Far-right populist parties have emerged as serious players in Germany, the Netherlands, Italy, Greece, Austria and Poland. Moreover, a similar anti-immigration, anti-establishment sentiment has also taken root in the US with the election of President Donald Trump.

With the populist far-right steadily chipping away at mainstream parties, the political pendulum is clearly in full swing. The exact direction of this swing, however, is not always clear. Perhaps the best way to characterise it is that rather than shifting towards the right on economic matters, politics is instead moving away from the left-right economic axis altogether. In its place, new cultural divides are emerging as a primary concern for large swathes of the electorate.

Centrist parties, faced with a potentially destabilising political force, have begun to accommodate the priorities and sentiments of the
far-right into the mainstream political conversation

Speaking to World Finance, Director of the Institute of Social Sciences Daniel Oesch said: “The main appeal of right-wing populist parties is cultural, and centres on identity politics: who belongs to the national community and what should this community look like? The key issues then relate to immigration, Islam, supranational integration, sexuality and gender. In comparison, economic issues have always been of minor relevance for right-wing populist parties.”

Winning formula
The role of economic policy for far-right populism has gradually evolved over time. In 1995, political scientist Herbert Kitechelt famously described a ‘winning formula’ for emerging far-right parties, outlining a particular combination of neoliberal economics, together with an authoritarian stance on social issues, as the key to capturing a significant new slice of the electorate. However, this characterisation of the far-right is now out of date: as Oesch explained: “Over the last two decades, most right-wing populist parties abandoned their initial neoliberal anti-tax stance of the 1980s.”

The National Front provides an archetypical example of this shift: it once championed an extremely market-liberal and anti-statist approach – dubbed by academics as ‘Reaganite before Reagan’ – yet it now openly backs a programme of more extensive state redistribution, if not one that extends to immigrants.

By the early 2000s, it became increasingly clear that successful far-right parties were in fact no longer confined to the right end of the economic spectrum, but were instead appealing to a much broader audience. A new winning formula emerged, whereby the populist parties that espoused centrist economic views – alongside their socioculturally authoritarian stance – appeared to capture a greater chunk of the electorate. However, this economically centrist characterisation is also somewhat unsatisfactory as a depiction of today’s far right. Contemporary populist parties achieve success with policies that run across the economic dimension, and supporters certainly do not cluster around the centre with regard to their economic views.

Instead, the electorates of most contemporary far-right parties can be better characterised as ‘unlikely coalitions’, due to their tendency to win votes from both poles of the political spectrum. More specifically, far-right support consists disproportionately of small business owners (shopkeepers, artisans and the self-employed), who traditionally vote for right-wing parties, and blue-collar workers, who were once the stronghold of left-wing parties.

A 2005 analysis by political sociologist Elizabeth Iversflaten pinpointed the counterintuitive nature of this populist support, which she described as being an “uneasy marriage” between groups that rarely find a common cause. She found that, despite voting for the same party, the groups fundamentally disagreed over economic matters relating to the role of the state in the economy. As a result, populist parties ultimately rely on an ideological affinity of cultural concerns eclipsing deep divisions on economic issues among their support base.

In light of these divisions, the winning formula hypothesis once again needs updating. One suggestion is that today’s populist parties support two concurrent winning formulas: simultaneously catering to their economically liberal and working-class support bases, uniting them through a core cultural ideology, but with economics playing little part in the equation.

There is, however, a question hanging over the idea that casting such a wide net can truly constitute a winning formula. While the far-right has continued to build an increasingly dedicated support base from both those on the economic left and right, a divided electorate could easily be cast as a weakness. Indeed, back in 2005, Iversflaten wrote: “The germ of destruction or limitation that these parties carry within them is without doubt their electorates’ deep division over taxes, welfare provisions and the desirable size of the public sector.”

A question of branding
Clearly, Iversflaten’s analysis from more than a decade ago begs the question of how these parties have overcome this weakness to become such a commanding new political force. Oesch points to an interesting strategy being employed by populist parties: “Right-wing populist parties put heavy emphasis on cultural issues in order to mask the fact that their voters have strongly diverging economic interests.” This would imply that dwelling on issues relating to the economic spectrum is actively harmful to populist parties, and that they owe their success to an ability to mute discourse on the economy and instead drag the political conversation toward cultural issues.

The political approach of far-right parties often focuses on pushing the boundaries in terms of what is deemed acceptable. They frequently utilise inflammatory rhetoric to draw the political conversation towards the issues that ignite cultural frustrations, to which they position themselves as being the only answer. To take an example, the German populist party AfD, which is heating up its campaign efforts in preparation for the upcoming federal election, operates a self-professed strategy of “targeted provocation”.

This technique, outlined in a recent strategy paper, urged for continued “careful planning” to “focus on being politically incorrect” in order to maintain the party’s electoral momentum. With such tactics, far-right parties are able to bring forward the cultural concerns of the electorate, while obscuring the economic issues that could alienate their voters.

Opaque ideology
Beyond the tactic of pulling attention towards cultural issues, there is also evidence many populist parties have actively embraced a strategy of ‘position blurring’ on economic issues. Jan Rovny, a political scientist at Sciences Po, argued that, while pushing hard on the non-economic dimension, Europe’s populist parties maintain a “consciously opaque profile” regarding their position on the left-right economic spectrum, helping them to hold on to the support of a base that is divided over economics.

According to Rovny’s analysis, the way parties carry out this strategy can take on different guises, and can vary from simply lacking any economic position or holding a concurrent multiplicity of positions, to holding distinctively unstable positions over time.

Rovny noted the manifestos of major parties are generally skewed toward economic issues – something that is not surprising given the central role of the economy in conventional political discourse. Radical right-wing parties, on the other hand, devote far less space to economic issues and almost twice as much of their manifestos to non-economic issues.

The pattern stretches further than just the weighting of manifestos: both voters and experts were found to have trouble pinpointing where far-right parties stand on the economic spectrum. Rovny’s analysis reads: “The data [shows] that radical-right economic placement seems rather erratic. While some sources suggest that a radical-right party stands on the extreme economic right, others place it to the left of the major-left party in the given system.”

Rovny noted the success of this position-blurring strategy could break down as parties enter government, where they will be forced to actively implement policies and clarify their positions. With this logic, as far-right parties edge closer to achieving active roles in government, the effect could be the exposure of underlying cracks in their ideologies.

Yet, if the concerns of the electorate remain focused on cultural divides rather than details of the economic spectrum, then far-right populists may never be fully exposed to this vulnerability. Brigitte Granville, Professor of International Economics and Economic Policy, said she didn’t feel the disagreement among voters would make populist parties vulnerable. “These parties are elected in response to the feeling that the other political parties are not listening”, she told World Finance. “Support for them will continue to rise if politicians do not listen and respond effectively to citizens’ concerns.”