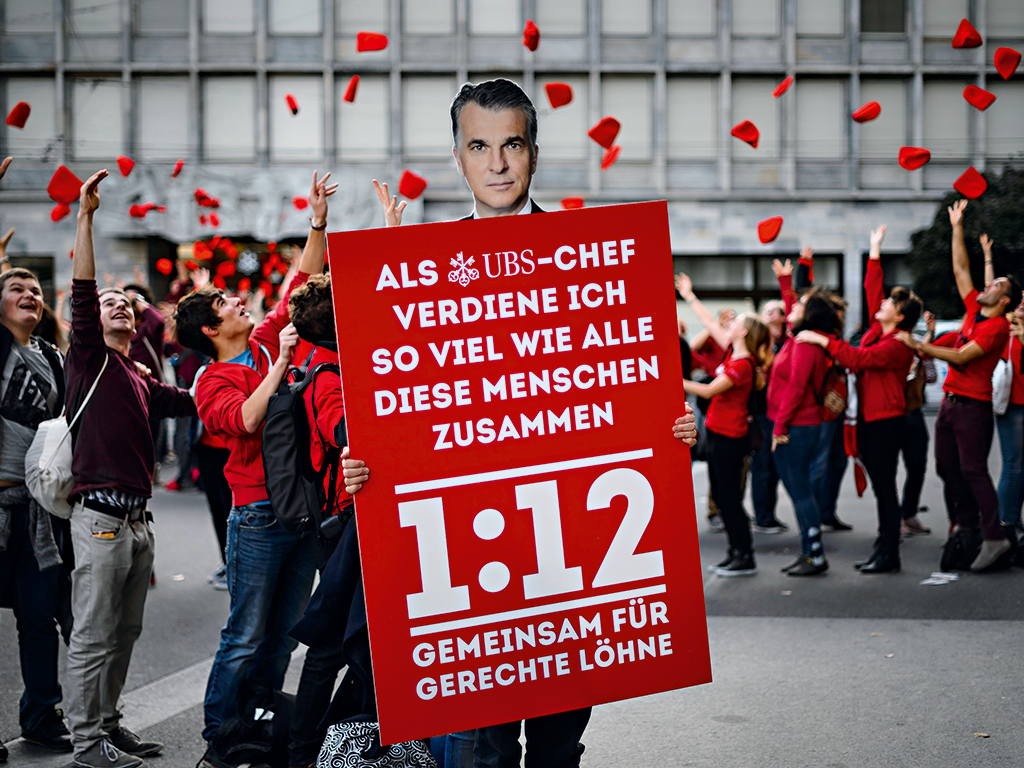 Swiss demonstrators advocating the proposed ‘1:12’ initiative that would have limited executive pay, before it was later defeated in a referendum. Since then, the Swiss have changed tack, channelling their efforts into fighting for unconditional basic income
Government policy | Infrastructure
Author: Matthew Timms

Unemployment is high on the agendas of ruling governments the world over, yet the sad fact remains that jobless rates in many jurisdictions are spiralling out of control, and will continue to do so for as long as glaring structural inefficiencies remain. Nowhere else on Earth can this be better seen than in Europe (see Fig. 1), where last year’s news of the continent’s barely perceptible recovery is threatening to stifle an appetite for much-needed structural reforms.

Austerity has loomed large over many of the region’s leading players, though it would appear the cuts of recent years are beginning to pay dividends. But whatever the prospects may be of a full-fledged recovery, there is still a great deal to be done about Europe’s hordes of under and unemployed – typically those in the youth bracket – who continue to suffer as a consequence of labour market inflexibilities.

Based on this year’s World Economic Forum, it would appear that leading industry names, politicians and economists alike are inclined to agree. Harvard’s Professor of Economics, Kenneth Rogoff, described the region’s employment situation as “horrific” and those seated alongside him on the panel made no secret of having the same opinion.

Among them was Eni’s Chairman, Giuseppe Recchi, who said, “It is difficult for a company to hire a 30-year-old person without work experience,” offering an insight into the challenges facing employers, as well as those affecting 30-something stuck-at-home jobseekers.

One of the most prominent issues to have surfaced out of Europe’s lacklustre jobs market is income inequality, given that candidates, no matter how skilled, are being forced to concede lowly pay rates or else face joblessness. It’s an ultimatum that not only serves to underline the current system’s structural inefficiencies, but one that threatens to inch otherwise well equipped candidates towards the brink of poverty.

What is the alternative?
The issue has riled the masses to such an extent that the Swiss populace last year attempted to redress the imbalance by taking a number of related proposals to referendum. First came the 1:12 initiative, which sought to stop monthly executive pay at no more than 12 times what the lowest paid staff member earns in a year – which could have given rise to quite considerable changes given that Roche, Nestlé and ABB’s CEO-to-worker pay ratios stand at 261, 238 and 225 respectively. The campaign failed to bear fruit, however, when in November Swiss voters overwhelmingly rejected the cap. The result was surprising to some, considering that the same electorate voted in favour of strict executive pay laws as recently as March.

Last year’s most well-supported Swiss initiative was the proposal for an unconditional basic income to be brought into being, which would see every Swiss national given a CHF 2,500 ($2,756) monthly pay cheque, no matter their circumstances. “The benefit of a basic income is that it provides all members of a society [with] the means with which to be truly free,” claims Almaz Zelleke, Secretary-Treasurer for the Basic Income Earth Initiative (BIEN), whose confidence in the system’s capacity to bring about positive change and close the inequality gap is unshakeable.

Although the proposal is unlikely to pass, the very fact that the initiative has gotten this far is not only a credit to Switzerland’s democratic system, but a startling indication of the lengths to which Europe’s citizens are willing to go in order to instruct systematic change in the jobs market.

Basic income
The debate on basic income is far from exclusive to Switzerland, however, with a great many around the world positing it as a legitimate solution to the unemployment issues that have surfaced on European shores. “A basic income provides the means to meet one’s basic needs, but also a floor on which one can build with other sources of income,” says Zelleke.

The European Citizens’ Initiative (ECI) for an Unconditional Basic Income, an organisation seeking to bring the system to ballot, writes, “As a result of current employment patterns and inadequate income maintenance systems (conditional, means-tested, not high enough), we regard the introduction of the unconditional basic income… in order to guarantee fundamental rights, especially a life in dignity, as set forth in the Charter of Fundamental Rights of the European Union.

“Above all, the unconditional basic income will help to prevent poverty and grant freedom to each individual, to determine his or her own life, and strengthen the participation of all in society.”

Critics have been quick to point out the various pitfalls of implementing such a system, namely with regard to financial feasibility and work disincentivisation. However, both issues are ones that have been addressed at length by the policy’s proponents and dismissed out of hand. The Citizens Income Trust, which has studied basic income for 30 years, claims the full integration of the tax and benefits system would make possible a payment to every UK citizen equivalent to that of the current tax threshold, while numerous others argue that proceeds from VAT could do much the same.

Although the proposal is unlikely to pass, the very fact that the initiative has gotten this far is not only a credit to Switzerland’s democratic system

As far as disincentivisation goes, various trial runs of the system have revealed nothing of the sort. The so-called Mincome Programme of 1974-79 saw the system implemented in Dauphin, Manitoba, in order to ascertain whether or not guaranteed income would inhibit productivity. The results showed that only two groups were affected negatively, these being new mothers, who spent more time with their children, and teenagers, who largely dedicated more time to studies and further education.

“Basic income would support the vital unpaid work most people already do in terms of care for families, volunteering in communities, creation of internet content. If basic income were instituted throughout Europe, it would slow down, if not stop, migration due to economic distress from poorer to wealthier countries within Europe. It would relieve the social tensions caused by income inequalities. It would support consumer demand in times of recession,” argues Barb Jacobson of the ECI.

What can be said with a reasonable degree of certainty is that Europe’s labour markets are failing in the face of ever changing conditions, whether this be on an economic or technological basis, which in turn is strangling the potential of Europe’s millions upon millions of under and unemployed. Moreover, there exists a glut of university graduates whose skills are too often laid to waste in dead-end jobs and seemingly endless spates of joblessness, many of whom could well possess the skills necessary to boost the continent’s recovery.

Out of date
One preoccupation inhibiting Europe’s leaders from instating structural change, however, is the enduring memory of a post-WWII economic boom, where economic growth was then largely reliant on labour. Skip forward to the present day and this is certainly no longer the case. “Since the 1970s, we’ve seen repeated economic crises as obstacles on the road back to that kind of post-war growth. The reality is that economic growth is now less dependent on labour, and more dependent on technological innovations,” says Jacobson. “This is a wonderful thing for society as a whole, but if the gains are to be shared by all we need to decouple income and labour.

“The recent attention to inequality, from the street-level activism of the Occupy movement to the academic work of scholars like Thomas Piketty and Emmanuel Saez, has made us more receptive to once-radical ideas, because it’s clear the old solutions don’t work anymore. There is more attention in rich nations, like Switzerland and Germany, which clearly can afford a basic income, but also in developing nations, like Kenya (Give Directly) and India (SEWA’s basic income pilot in Madhya Pradesh), where the idea of giving money directly to individuals and bypassing corrupt governments has great appeal.”

The continent’s unemployment deficiencies are due not to a skills shortage, but to regimes that fail to accommodate willing workers to a satisfactory degree. As such, the benefit of a basic income above all else is that it frees up workers to do whatever they please with whatever skills they have, without the financial pressures that come with the age-old and inflexible markets of today.