The pros and cons of external hiring 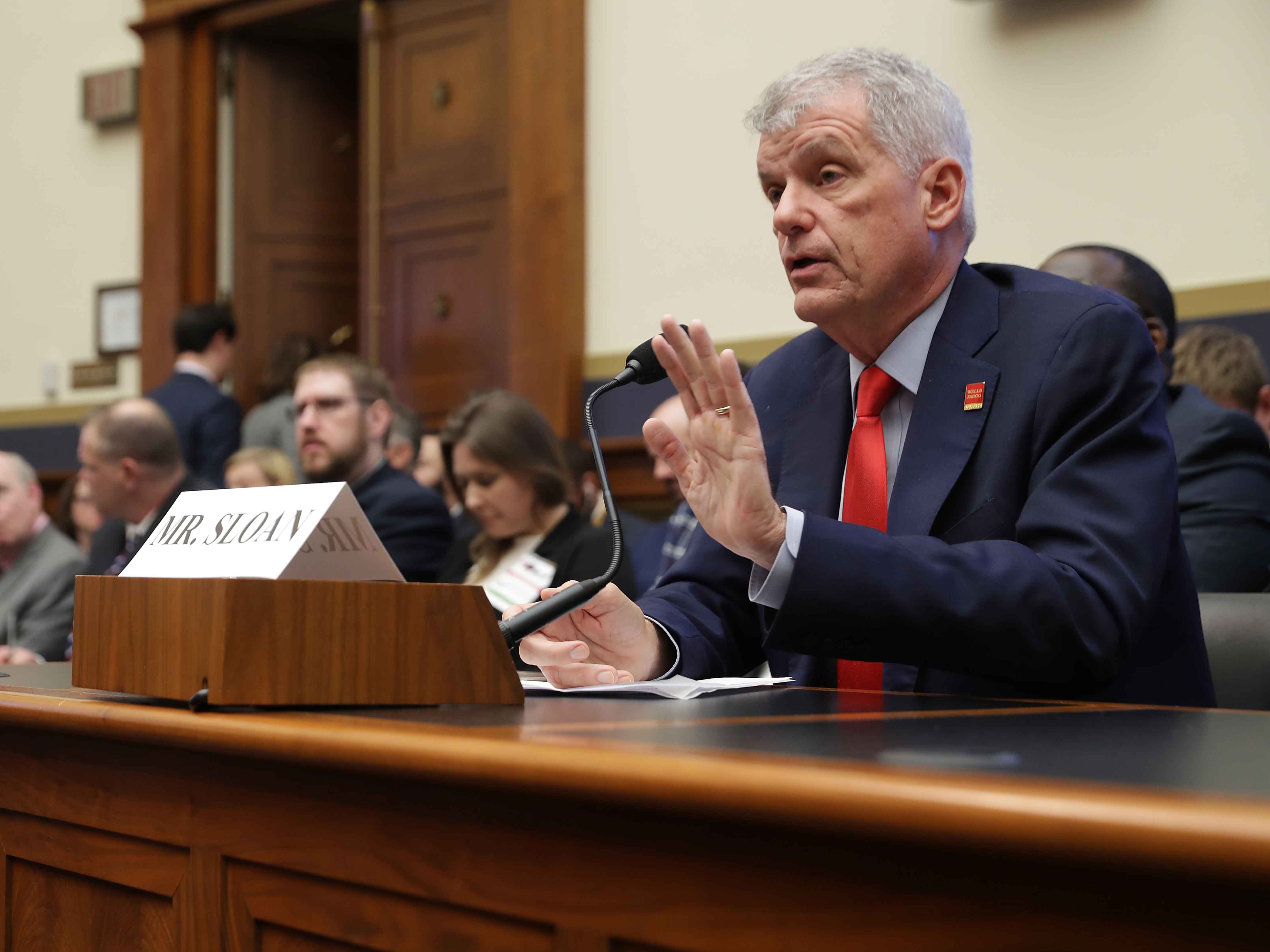 When former Wells Fargo CEO Tim Sloan stepped down from his position in March 2019, it was announced that the company would only consider external candidates to replace him
Corporate Governance | Featured | Strategy
Author: Sophie Perryer

When Tim Sloan became CEO of Wells Fargo in October 2016, he inherited the mammoth task of saving the lender’s reputation in the wake of a string of damaging scandals. Following a revelation in the same year that the bank’s employees had been financially incentivised to set up fake accounts, Wells Fargo had drawn the ire of a host of lawmakers, regulators and, most importantly, customers. All were demanding reform across every level of the bank.

Sloan, who was serving as president and COO at the time, was charged with restoring trust and building a prosperous future for the lender in the wake of the abrupt departure of his predecessor, John Stumpf.

Almost three years later, it appears the challenge was too great. On March 29, Wells Fargo announced that Sloan would be stepping down, effective immediately. His resignation came just two weeks after he had testified before congressional lawmakers that the bank was a better place than when he had started – a statement few were convinced by. In the wake of the announcement, Wells Fargo’s General Counsel C Allen Parker was named interim CEO, and the company’s board began the daunting task of searching for Sloan’s permanent successor.

Not only is Wells Fargo looking outside the company for its new CEO, but it is likely to eschew traditional candidates altogether

A new challenge
This search is markedly different to the one undertaken by board members in 2016. “They had three goals in replacing Stumpf: speed, integrity and competence,” Peter Conti-Brown, a business ethics and law professor at the Wharton School of the University of Pennsylvania, told Reuters at the time. “If you want to move very fast and find someone intimately familiar with the business, you’ve got to hire an insider.” This time, it appears that speed and company knowledge are not preferential qualities for Sloan’s successor: rather, the board is seeking a candidate with the power to definitively reform the bank’s public image and provide vital impetus for recovery.

For this reason, Wells Fargo has made the decision to solely consider external candidates for the CEO position. Furthermore, not only is the lender looking outside the company, but it is likely to eschew traditional candidates altogether. Warren Buffett, who owns Berkshire Hathaway, the bank’s single largest shareholder, told the Financial Times in an interview: “They just have to come from someplace [outside Wells Fargo], and they shouldn’t come from Wall Street. They probably shouldn’t come from JPMorgan or Goldman Sachs.”

While Buffett’s reasoning was based on the fact that poaching a candidate from another Wall Street lender would draw scrutiny from Congress, there are plenty of other benefits to an external candidate search: it will help to bring fresh thinking to the bank, thereby avoiding the perpetuation of industry echo chambers. Furthermore, searching outside the typical remit provides the opportunity to increase diversity in a sector where, according to the IMF, women only account for less than a quarter of leading supervisory roles (see Fig 1).

Up to the job
According to Paul Twine, the director of banking and financial services at executive search firm Carmichael Fisher, there are three key factors to take into account when searching for a new CEO: market conditions, regulatory scrutiny and overall business strategy. In the Wells Fargo case, scrutiny is the most important consideration due to the accounts scandal, which means any candidate will have to stand up to a number of regulatory tests. The fact that the bank is in hot water also won’t make its search easy, as the new CEO will be expected (to a greater or lesser extent) to identify and tackle corruption within the business. “That role is not for the faint-hearted,” Twine told World Finance. “They need to identify very quickly not only what the strategy is for that business going forwards and set a compelling vision for the board and for the shareholders, but they also need [to] get into the weeds and figure out where the rot is as quickly as possible.” This task, while challenging for any new CEO, is particularly difficult for an external candidate: as they didn’t hire any of the executive team or work their way up through the business, they will not have any internal allies. There is a risk, therefore, that they will struggle to achieve any meaningful change if they do not rapidly identify those with significant influence within the business and get them on side. They may also find themselves the target of resentment from internal candidates who were not considered for the position.

On the other hand, the benefit of bringing in an external CEO eliminates the possibility that they could be tarnished in any way by existing internal issues. “Hiring someone [who] could not be implicated [in the scandal] is a positive solution for the business,” said Twine. Given the necessity for business reform at Wells Fargo, the external candidate would have to be someone who had navigated a company through transformational change.

The position is likely to attract a highly specific candidate pool, made up of those who have overseen this kind of high-profile transformation before and understand the risks – not only of potential failure when carrying out necessary changes, but also of damage to their own reputation. “Some will see it as an opportunity to make a name for themselves, because they’ll be able to tangibly demonstrate what they’ve done,” said Twine.

It’s a high-risk, high-reward opportunity. In the eyes of competitors and the press, the new CEO could be seen as Wells Fargo’s saviour, provided they succeed in extinguishing the fires currently burning bright at the American lender. Conversely, if expectations are not met, there is a risk the candidate could be seen as a failure. “It’s a case of deciding what failing looks like,” Twine told World Finance. “If they manage to solve some of the problems but not all of them, maybe that’s actually been a great result – maybe that’s all the next CEO was going to be able to achieve.”

The new CEO could be seen as Wells Fargo’s saviour, provided they succeed in extinguishing the fires currently burning bright at the American lender

Reaping the rewards
While Buffett’s desire to look beyond Wells Fargo and Wall Street more broadly is guaranteed to bring in some fresh thinking, there are also certain criteria that the new CEO must meet on a logistical level. “You can’t have someone [who’s] never been in a financially regulated entity go and run a bank,” said Twine. “However, it depends on how creative [Wells Fargo] wants to be – if it wants to look for someone outside of investment banking, they could consider hedge funds or asset management, or large-scale retail and commercial banking businesses.” While this will mean the candidate will have to learn the ropes extremely quickly, it also guarantees they will bring an entirely different perspective to the business. “The market’s changing, there’s a lot of disintermediation, plus fintech firms are nipping at the heels of larger financial services firms,” said Twine. “Perhaps a fresh set of eyes is exactly what’s needed to stay current.”

An external search also provides a sorely needed opportunity to collate a more diverse talent pool and consider candidates who would perhaps not have been on the radar had the company looked internally. According to a 2019 report by Refinitiv, women occupied just 13.4 percent of executive positions in banking and financial services in the 2017/18 financial year, despite making up 49.4 percent and 54.5 percent of the workforce respectively. There are a variety of reasons for this executive underrepresentation, from a lack of flexible working options for women re-entering the workplace after maternity leave to male executives remaining in positions for decades, meaning women may not get a look-in for a promotion for 20 years. These issues may be alleviated by moving between companies; as such, by looking externally, Wells Fargo could nab itself a highly talented female candidate who feels disenfranchised in her current role.

Not only that, but for firms such as Wells Fargo that are under scrutiny, a female leadership style can be a more productive way of achieving change. According to research by McKinsey, women tend to adopt people-focused, reward-based leadership behaviours that are known to improve organisational performance. “That consultative leadership approach that is typically associated with women is very appropriate for a business under transformation,” said Twine. Moreover, a 2016 study of more than 21,000 public companies by the Peterson Institute for International Economics found that a firm with 30 percent female leadership could expect to add up to six percentage points to its net margin in comparison to a business with no female leaders.

For Wells Fargo, hiring an external female candidate could prove a fruitful method of pursuing transformational change. Certainly, by looking externally, the bank is guaranteeing the introduction of new ideas. By choosing a female candidate on top, though, the bank would send a powerful message to the financial sector that diversity is not a tick-box exercise, but a way of achieving real reform and boosting bottom lines. After all, Wells Fargo is the world’s fourth-largest bank, and according to Buffett, one in three US households does business with it in one form or another. For better or for worse, its actions have an impact – it now has an opportunity to make sure it sets a positive example for the future.