Why factory farming is no longer sustainable

Factory farming should raise a red flag for any mainstream investor. More than any other group, investors have the influence and motivation to instigate reform 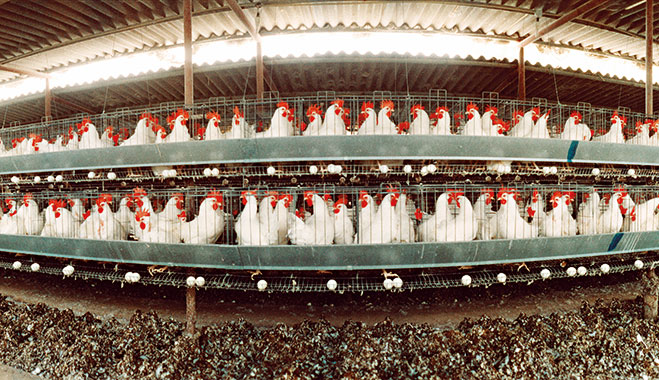 Overuse of antibiotics has allowed animals to be kept in more and more cramped conditions, but the so-called efficiency gains are often cancelled out by dangers such as drug-resistant bacteria
Corporate Governance | Strategy
Author: Matt Timms

The proliferation of factory farming is as much a feature of the industrial age as fossil fuel production. In only the last half-century, rapid population growth, quickly rising incomes and intense urbanisation have given rise to a sharp spike in meat consumption. Between 1950 and 1997, production rose from 44 million to 211 million tonnes, and once-cumbersome agricultural processes have been consolidated to the point where high-volume, low-cost methods have won through.

“Looking at the industry through an ESG [environmental, social and corporate governance] lens produces alarming results that should raise a red flag to mainstream investors across the world”, wrote Jeremy Coller, Founder of the Farm Animal Investment Risk & Return (FAIRR) initiative. With the global population on course to swell a further third by the year 2040, there is a general expectation that worldwide demand for animal protein will skyrocket 70 percent by the century’s halfway point, with much of the responsibility resting on the shoulders of industrial-sized farms.

Double-edged sword
In Asia, demand for animal protein is soaring, and while the trend has been held up as proof of the continent’s rising prosperity, it is far from without consequence. See China, where a doubling of the population has, on the one hand, resulted in a substantial increase in meat consumption, and on the other stretched its food system to breaking point. According to Alan Briefel, Executive Director of the FAIRR initiative, China now has the world’s largest pig and poultry industries, is the world’s largest consumer of pork, the second-largest producer of poultry, and the third largest milk-producing nation. Meat consumption there has quadrupled since 1971, and while some see it as positive, others, PwC included, believe it will “place enormous burdens on an already challenged domestic food system, and have significant ramifications on international trade in agriculture”.

This same dependence on animal protein feeds into much more prescient issues concerning land use, resource scarcity and climate change, all of which threaten to unseat China as a shining beacon of prosperity and wreak havoc on its population’s health and wellbeing. As damning a situation as China’s is, it is but a glimpse of the long-term implications associated with industrialised meat production, and the practice itself could well become the next big risk for investors.

In only the last half-century, rapid population growth, quickly rising incomes and intense urbanisation have given rise to a sharp spike in
meat consumption

Steven Heim, Director of ESG Research at Boston Common Asset Management, cites methane emissions and antibiotic use as the two issues most deserving of attention on the investor front. Speaking to World Finance, he emphasised that these risks and others must be taken into account if investors wish to avoid future damages. More than anything, the scale of the industry and the extent to which it has been allowed to grow unchallenged should give people – investors in particular – reason to feel anxious. The industrialisation of farming has only recently been subjected to the same pressures as items such as fossil fuels.

To date, more than 70 percent of the world’s farm animals reside in factory farms, and larger feedlots are known to contain upwards of 100,000 cattle or 500,000 broiler chickens living in close proximity. The share in the US is closer to 99 percent, and as demand for animal products in developing countries increases at a rapid pace, we should expect to see the global percentage climb higher still.

A number of ‘advances’ in farming since the mid-1970s in particular have made the practice itself more ‘efficient’ and effectively transformed the old image of farming into something that resembles a sprawling, windowless machine. The use of antibiotics from that point onwards has facilitated the crowding of animals into tighter and tighter spaces, and the realisation that these same drugs facilitate faster growth again means antibiotics have become an integral part of the process.

These ‘innovations’ and others mean the average US dairy cow today provides more than 2,300 gallons of milk a year, compared to 665 gallons in 1950. Chickens now reach slaughter weight at 47 days of age as opposed to 70. As much as profit-hungry companies have welcomed these ‘new and improved’ methods, they carry a number of risks for investors.

A recent report by FAIRR outlined these risks on the investor side, which – willingly or not – have a stake in factory farming and could lose out to its very many uncomfortable truths. On a macro level, the livestock sector accounts for 14 percent of global GHG emissions – more than the transport sector – and, in the US, 80 percent of all antibiotic use. It is the number one consumer of water in drought-stricken California and the topmost reason for the spread of bird (H5N2) and swine (H1N1) flu – with the former responsible for a staggering $3.3bn in industry losses.

On a smaller – albeit still significant – scale, the issue of antibiotic overuse has investors rightly concerned about the rise of drug resistant bacteria. The farms in question provide the perfect conditions for new strains to develop and spread, and without measures to protect against the spread of disease, large-scale epidemics and human infection could ensue.

What to do?
All in all, the FAIRR report identified 28 ESG issues that threaten to exert a negative financial impact on any company with connections to factory farming. The repercussions can be colossal, ranging from safety scandals to environmental fines and an overreliance on government subsidies. Regardless of this, however, the risks tied to factory farming seldom register with offending companies, and efforts to raise awareness in the past have largely come up short.

UK television chef Hugh Fearnley-Whittingstall in 2008 failed to drum up enough support among shareholders of the supermarket chain Tesco for a motion to improve animal welfare standards. This year, shareholders at Tyson Foods rejected a resolution that would have required the company to institute a ‘water stewardship’ policy, following findings that it dumped almost seven times as much surface discharge as Exxon between 2010 and 2014. These motions and many more like it are founded on the assumption that improved governance or welfare standards require a returns trade-off. Countless studies show this not to be the case.

US Mexican restaurant chain Chipotle has demonstrated time and again that prioritising animal welfare can boost both sales and share price. The company’s CEO Steve Ells implemented a sourcing policy stipulating animals be fed a vegetarian diet, not given antibiotics or growth hormones, and allowed to roam free in pastures, following a visit to a factory farm in 1999. Further to this commitment, Chipotle’s switch to sustainable sourcing and the resulting $1 per pork burrito price rise did not, as many predicted, lead to a sudden drop in sales – quite the opposite in fact.

Speaking about the challenges of engaging investors, Briefel claimed it was first about raising awareness, and conceded that, while investors are increasingly concerned about sustainability issues, there is a knowledge gap when it comes to intensive farming and farm animal welfare.

“It’s about convincing them that this is about materiality, not morality”, he said. “Mention ‘animal welfare’ to most investors and they immediately think this is the preserve of NGOs, or specialist ethical investors – not, by and large, big mainstream investors. But they couldn’t be more wrong. The issues at stake are core business issues that can have a major material impact if not adequately dealt with.”

An investigation into meat-packing company Hallmark Westland in 2008 shed light on animal cruelty and health concerns, forcing the company into the biggest meat recall in US history – 65 million kilograms (equivalent to the weight of 195 jumbo jets) – and a subsequent class action that bankrupted the company. More recently, medical research firm Santa Cruz Biotech suffered a $3.5m fine and had its license revoked after allegations of mistreatment of animals.

For now, the issue is not how much money is exposed to any one or more of these 28 ESG risks, but rather what investors concerned about factory farming risks can do to drive change. The FAIRR report itself is proof big names are beginning to take note, and the support of ShareAction, Boston Common Asset Management, Farm Forward and others should bring the issue of factory farming to the fore.

Heim conceded the conversation could soon turn to the issue of divestment, though he reiterated the important thing for now is to ensure investors are as informed about factory farm investment risks as they are, say, fossil fuels. Assuming the discussion around factory farming investment risks stays lively, less risky alternatives could emerge as investors look to preserve and grow their wealth.

“Investors have a big role to play”, said Briefel. “They sit at the top of the value chain and, as ultimate owners of companies, they have the influence and motivation to make the changes that are required. There are other elements of society that need to be engaged – namely consumers, regulators and businesses themselves – but investors are a key part of the chain and one that can take a lead.”