The US’ key infrastructure begins to crumble 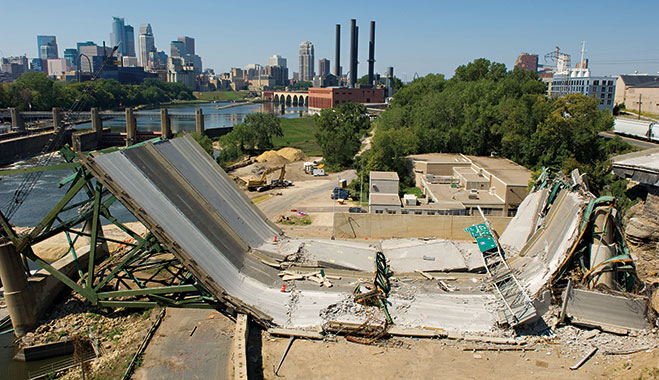 Across the US, key infrastructure elements are crumbling, with repairs often not made until it is too late
Strategy
Author: Elizabeth Matsangou

Being the world’s hegemon and economic superpower, those outside the US may assume that its nationwide infrastructure is of the highest standard – reliable, safe, efficient and innovative. Or, at the very least, that the state of railways, waterways, subways and bridges in the US are good. Yet as the Failure to Act report from the American Society of Civil Engineers (ASCE) has warned, support systems in the US are in fact far from good – actually, they are in a terrible state of affairs. So bad is the situation across the US, that the organisation calculates a GDP loss of $3.9trn by 2025, with lost business sales at around $7trn and more than 2.5 million jobs under threat.

The underlying problem for the various sectors connected to the broad term ‘infrastructure’ comes down to a severe lack of investment. The ASCE forecasts that about $3.6trn is needed by 2020 in order to raise the country’s infrastructure to acceptable standards. With such large sums in play, many instinctively look to the federal government to fix this all-encompassing issue. The question of funding, however, is actually far more complex than that. State governments, localities and the private sector all have a large role to play; moreover, when it comes to infrastructure, the most successful projects are likely to result from a partnership of the latter.

Escalating problems
According to the ASCE’s report, unless addressed with the urgency and funds required, US infrastructure is on a path to economic disaster. “We did this economic study to try to show people here that if we continue to invest at the current level, we’re taking an economic risk as a nation”, said Casey Dinges, Senior MD at the ASCE. The logic behind this forecast of doom is simply that infrastructure has an impact on absolutely everything – from productivity and prices, to wages and disposable income.

Rising business costs are a huge problem in the US’ deteriorating infrastructure, given the cumulative effects that ensue when they increase. If surface transportation – namely airports, ports, railways and inland waterways – continue to deteriorate or become increasingly congested, the cost of transportation will inevitably increase. This will impact imported goods that are necessary for the manufacture of US-made products, as well as exports. A resulting increase in the price of exports will therefore make US goods less competitive on the international market, and so threaten the country’s position in global trade. With export revenue in decline, GDP will take a hit as well – which in turn can have a series of disconcerting cumulative effects.

Infrastructure has an impact on absolutely everything – from productivity and prices, to wages and disposable income

Ultimately, the rising costs of an increasingly inefficient and expensive delivery of water, energy and goods are passed onto households. With consumers having to spend more on goods and services, disposable income will inevitably fall, which will reduce both spending and saving – a vicious cycle that again sees the economy suffer.

What’s more, as Dinges told World Finance, exacerbating this cycle further is the reduction in wages that is likely to occur if business costs continue to rise and productivity levels continue to fall. “Businesses delay hiring or don’t hire, or keep people at a part-time job instead of moving them up to a full-time job – all these little impacts add up to the kind of numbers that we released in the report”, he said. The ASCE study also predicted that fewer high paying jobs could be created, particularly as the labour market may shift to fulfil the needs that result from the infrastructure deficit.

According to Dinges, the current funding gap for surface transportation is around $100bn a year. “That’s a big number, but when I think of the US GDP of $18trn and the importance of surface transportation to the entire economy and almost everyone’s daily lives, what’s $100bn? We have to be able to figure that out.”

At present, the problem is already costing every household in the US an average of $3,400 per year, or just over $9 a day, according to the report. “If we increase investments, we can avoid these economic losses with a benefit cost ratio of about 3 to 1; if we invest $3 a day per family, we can avoid those losses of $9 a day”, said the organisation. It hopes that, by shedding light on the significant impact of ageing infrastructure in a way that is both relatable and understandable, it is possible that a move towards greater investment will follow – because if it does not, this figure is set to worsen apace with the deterioration of vital support systems across the entire country.

Disrupting the flow
While one automatically thinks of roads, railways and ports when it comes to infrastructure, the term covers a broad range of systems that are crucial to the functionality and expansion of any economy. “A water main will rupture in the US every two minutes, but unless it is happening on someone’s street or outside their business, they won’t think about it”, said Dinges. Additionally, there are the systems that are not used by the public in their daily lives, but still have a sizeable impact on them. For example, the inland waterway system that connects the Mississippi river to the Midwest region is vital to the US’ positioning within the global market.

“People don’t even realise the massive movements of products and raw materials that travel by barge down these rivers. One of the numbers I saw is that these barges, [which] are very energy efficient and can carry huge amounts of materials, displace the equivalent of 51 million truck trips per year on our roadways. So it’s actually an important component of the US surface transportation system”, Dinges said. “We already have incredible traffic issues in major metropolitan areas here, just think if another 51 million trips had to happen on our already crowded road system, what kind of impact would that have?”

Maintaining the necessary infrastructure to support drinking water is another huge and pressing challenge that needs to be addressed urgently. While a federal programme was implemented in the 1970s, it ceased to exist some time ago, with the responsibility now resting with utility companies and local government entities. Therefore, a new look is needed to modernise and reinvigorate the maintenance and development of these systems in the long term.

“These modern drinking water systems had more impact on human health than just about anything, including the discovery of many medicines and antibiotics”, Dinges said. “[However], there is a tendency to take this stuff for granted until it is absolutely not working. At ASCE, a civil engineering association with a responsibility to design and manage these facilities, the notion of waiting for an absolute crisis is unacceptable.”

While one automatically thinks of roads, railways and ports when it comes to infrastructure, the term covers a broad range of systems that are crucial to the functionality and expansion of any economy

The solution undoubtedly comes down to encouraging greater investment, but even if and when this is achieved, the allocation of funds is another highly complex issue, particularly in a country as large as the US. As such, the decision of who pays what and of how to prioritise the numerous projects that need investment is a mammoth challenge.

In 2015, public capital investment was at its lowest level in over six decades, at just $611bn and 3.4 percent of GDP. Some promise was shown when Congress passed the Fast Act, a five-year $300bn bill aimed at addressing the long-term funding issue for surface transportation maintenance. Yet, disappointingly, the increases each year are nominal, and by no means do they tackle the gap highlighted by ASCE in its pivotal study.

The shortfalls of the Fast Act highlight that, while the federal government has an important function in resolving the country’s infrastructure problem, that of localities and state entities is far more crucial.

“I think we overemphasise the federal role in a lot of cases”, said Robert Puentes, President and CEO of the Eno Centre for Transportation. “We think about infrastructure in very big abstract terms, we think about the country in very big abstract terms, and it kind of defaults them to a federal role and responsibility, when really the federal role is actually probably more limited than folks think. Even if you take the two sectors of transport and water, federal investments are only about a third of all of the investments that are made in the US; states and localities have the lion’s share.”

States act
Despite the forecasts given by Failure to Act, there is still cause for optimism. The poor state of infrastructure in the US is finally growing in the public dialogue, and was picked up on by several candidates. One-time presidential hopefuls Bernie Sanders and Marco Rubio, along with Democratic nominee Hillary Clinton, each published manifestos for improving the country’s deteriorating infrastructure. Sanders’ proposal involves investing a further $1trn of federal funds, while Clinton really gets into the specifics of how the system should be governed, looking forward. In any case, there is a general consensus that the role of federal government must be reassessed in order to establish a more efficient system that encourages a greater flow of investment.

Moreover, several states are tackling their individual challenges head-on, even in spite of the potential outcry that can accompany tax increases. Los Angeles has been making its own strategic and prioritised investments in its transport systems in order to safeguard its identity as a modern metropolitan area with global goals.
“Denver is another example of a place that is trying to accommodate a lot of the growth that is projected for the region over the next 20, 30 years”, Puentes said. “They are using their transport system as a way to channel and focus that growth in places where they want it to occur.”

As crucial as these initiatives are, the federal government must still take a leadership role where necessary, certainly in terms of multi-state projects and cross-border systems. In regards to intra-state systems, it is imperative that it provides the support needed by local entities.

“They really should be incentivising and encouraging states, localities and metropolitan areas to do their own problem solving”, Puentes said. “They should be supportive of the new innovations that are happening out there, whether it’s new kinds of financing partnerships or new types of regulatory reforms.”

Partnerships may indeed be the key to solving the US infrastructure deficit. While private-public partnerships in infrastructure have existed for some time in other regions – such as Asia and Europe – they have largely remained on the sideline in the US. “There is the belief that these are shared public assets, so that’s a little bit of a political challenge for the US”, Dinges said. Encouragingly, however, this shift is beginning to take place in the US as well. For example, Texas recently struck a partnership with private firm Texas Turnpike Corporation, which is investing and constructing new toll roads in the state, in return for the toll fees collected over an agreed stretch of time.

With more successful projects and partnerships taking place, together with more dialogue in the public space and far greater attention, perhaps Failure to Act came just at the right time to reverse a self-fulfilling prophecy that threatens the not-quite-invincible US economy.