NAFTA negotiations will determine Mexico’s position in an uncertain world

In the run up to NAFTA renegotiations, SURA Asset Management address Mexico’s relationship with the US and the state of the country’s financial markets 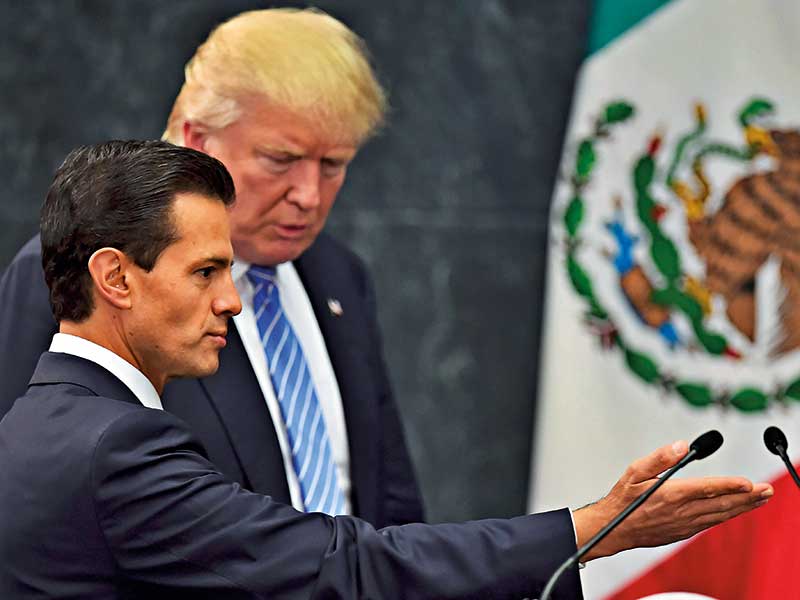 In an effort to deter the Mexican peso’s sharp depreciation, Mexico’s central bank, Banxico, began an aggressive monetary cycle towards the end of 2015. This strategy continues today, with the benchmark rate increasing from three percent in December 2015 to 6.5 percent in March of this year.

In 2016, the Mexican peso had one of its worst years, falling 20 percent against the US dollar and ranking as one of the worst performing currencies worldwide. Fortunately, however, this meant a mild pass-through effect to domestic inflation, which ended close to Banxico’s target inflation rate of three percent.

The outcome of the recent US election was one of the main reasons foreign exchange depreciated, as all asset classes in the country were hit with significant volatility after Trump’s unexpected election victory. The polemical proposals from the Republican candidate had triggered a wave of uncertainty regarding North and South America’s future commercial relationship. It also cast a shadow of doubt over Mexico’s overall role as the US’ southern neighbour and the continued participation of the North American Free Trade Agreement’s (NAFTA) most vulnerable member.

Mexico and Trump
Donald Trump’s election victory sealed what appeared to be the worst case scenario for Mexico. The new president’s proposal to renegotiate NAFTA presented a major risk for a country with a more than 80 percent dependence on US-bound exports. It is important to note Mexico’s important macroeconomic challenges had already put the country under the scope for a possible downgrade by major rating agencies.

The market, therefore, had an immediate risk-off reaction, particularly in the case of the Mexican peso. The start of 2017 also witnessed a sudden and large increase in domestic gasoline and diesel prices, as Mexico’s Ministry of Finance stopped subsidising energy prices. This weakened foreign exchange further and affected consumers nationwide.

In mid-April, inflation was significantly higher than Banxico’s target, with a read of 5.6 percent. We expect these prices to continue to increase, but will also be interested to see how political events affect expectations further. In the meantime, Banxico will be forced to keep raising rates until there are clear signs of inflation returning to target levels.

This has caused the nominal yield curve to flatten, with the Mexican peso’s volatility forcing the central bank to aggressively hike its rates. Further, we believe the uncertainty of foreign exchange will prevail in the short term, as Mexico and the US head towards NAFTA discussions.

This, along with above average CPI data, favours our underweight strategy on the short end of the curve. Regarding the rest of the nominal yield curve, we prefer the belly to the long end of the curve, as current levels do not price any premium for liquidity or maturity between the 20 to 30 year nodes.

We are, however, more positive about inflation-linked bonds, as we believe the current economic dynamics in Mexico will still support high CPI levels for the rest of this year. We also favour the belly of the curve on the real yield curve, as the very short end volatility does not compensate for inflation carry. Overall, we expect the local currency yield curve to increase by the end of the year, and the long end of the curve (20 to 30 years) to steepen. Inflation linked bonds will also be impacted by this movement, although they will be more resilient than the nominal yield curve.

While higher ex-ante real rates could be worrisome in an economy that is already decelerating, Mexico’s risk premium has come down sharply. That said, uncertainty still remains, particularly in relation to the Trump administration’s foreign policy. Moreover, inflation looks poised to remain high for the short term at least.

This mix could justify higher rates in order to keep a lid on volatility in local financial assets, particularly with the US tightening its belt. It could also represent good ammunition in case of an externally induced slowdown, caused, for example, by a negative outcome in the NAFTA renegotiation.

Risks offset by the US election
The Mexican stock exchange has also been affected by Donald Trump’s victory, with its main index, Mexbol, suffering an important correction throughout the fourth quarter of 2016. The universe of listed companies faced several headwinds as a result, with some facing a risk to US-bound exports, while others had increased financial leverage in spiking US dollars. Many were also affected by the local currency weakness, which accelerated expectations of rising inflation and central bank tightening.

However, as Trump’s presidency advanced through its initial weeks, market sentiment experienced a dramatic change. Trump’s tone towards Mexico – as well as his main commercial advisor’s – became softer and sometimes even constructive. Furthermore, the first major reform put to Congress by Trump’s administration failed to succeed, suggesting all of Trump’s campaign promises may not come to fruition.

By the first quarter of 2017, the Mexican peso had started to strengthen, and, with further action from Banxico, the extreme caution towards Mexican equities gradually began to fade. Our belief is the market has been overly complacent with Mexico, setting aside many of the same reasons risk alarms were triggered a few months previously.

The current level for Mexbol implies very challenging growth expectations, which have continued to be disappointing for the past five years. A great deal of this market’s overestimation originated in the erroneous foreign exchange expectations at the beginning of each year. Therefore, Mexican equities have normally become richer as the Mexican peso has weakened, making them as expensive as in other emerging markets.

of Mexican exports are US bound

On top of this, Mexico will be exposed to a very tight electoral process in 2018, which could bring back an incremental sense of risk as markets respond to political uncertainty. Nevertheless, we see interesting opportunities in the off-index space, as these companies benefit from good internal macroeconomic trends.

Even as risks prevail, Mexico’s macroeconomic balance seems poised for further improvement during 2017; the country’s current account has been adjusting thanks to a boom in non-oil exports. Along with a lower fiscal deficit – helped by a non-recurring income from the central bank’s foreign reserves – it seems buffers are being built despite a negative backdrop. However, uncertainty continues as we await the outcome of the NAFTA renegotiations.

Negotiating NAFTA
If the aftermath of the NAFTA renegotiation is negative, the deterioration in foreign exchange will hardly be enough to sustain the recent acceleration of Mexican exports. Instead, investment will decrease and household consumption will take a defensive detour. Mexico’s public finances will also suffer thanks to shrinking tax revenues.

On the other hand, if the outcome is positive, we believe Mexico’s economy will be in a fairly good position – similar to the situation seen two years ago after the approval of the country’s structural reforms. This binary scenario is highly dependent on political and external factors, which, unfortunately, may depend on Trump’s mood swings.

While we expect volatility as NAFTA negotiations advance, our base scenario is for the two nations to achieve a fair trade deal with no major changes affecting the trade partnership. Fears have diminished as the US’ stance on NAFTA has softened, so we remain optimistic about Mexico’s debt denominated in US dollars. We also believe corporate activity remains in good shape, with credit being hit by external uncertainty rather than fundamentals.

We are also positive on credit, as we have seen yield corrections from historical lows of last year. The strategy favours maturities below three years on the floating rate scheme, as the risk is upside bias in terms of rate hikes. Meanwhile, we remain neutral on corporate debt with fixed coupons, as more repricing is expected following government yield curve corrections.

Overall, Mexico is situated in a very interesting and unique position for the years to come. Uncertainty over its relationship with the US has created a number of significant opportunities for Mexico; presenting a substantial upside potential assuming the outcome of the NAFTA renegotiation isn’t too radical. The relationship between both economies is deep and difficult to untie, which makes us positively biased.

Nonetheless, until this uncertainty dissipates, volatility will continue as market participants assess the risk-reward ratio on the country’s different asset classes. This said, SURA Asset Management’s stand remains one of optimism, and this has been shown by the company’s significant investments in Mexico over the past decade.