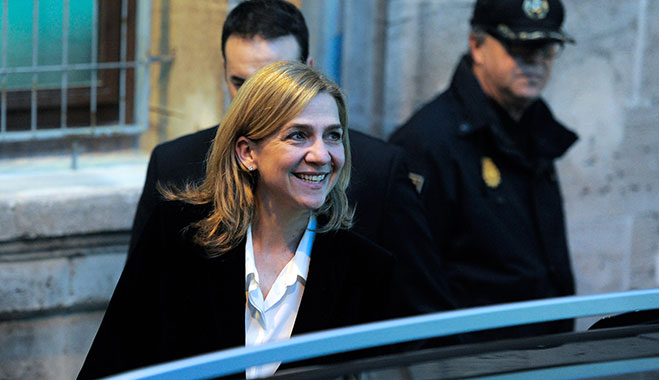 New allegations of tax fraud and money laundering have hit the Spanish royal family as the youngest daughter of King Juan Carlos was named a formal suspect in a long-running corruption inquiry.

Princess Cristina, 48, and seventh in line to the Spanish throne, is currently the subject of allegations of money laundering and tax evasion, making her the first member of the royal family to appear in court since the restoration of the monarchy in 1975.

The accusations towards the princess are based on an ongoing case against her husband, Iñaki Urdangarin, who is being charged for embezzling public money, as well as committing fraud and tax evasion. This follows investigations that suggest that the former Olympic handball player and his business partner, Diego Torres, have funnelled €5.8m ($8m) of public funds through Urdangarin’s charitable foundation, which has organised sports business conferences in Mallorca and elsewhere in Spain.

Urdangarin successfully won contracts to put on such events for the local governments in the Balearic Islands back in the early 2000s. However, according to investigating judge José Castro, several of the events never took place and Urdangarin also overcharged for the services he did provide. In addition, most of the public funds ended up in his private company Aizoon, without the appropriate tax being paid.

Problematically, the princess is a co-owner of the not-for-profit Instituto Nóos and their family business Aizoon, which the money was allegedly siphoned off through and used for personal expenses, such as work on their €6m Barcelona mansion. Princess Cristina and Urdangarin have both denied any wrongdoing.

Prime ministerial support
Further to this, Spanish Prime Minister Mariano Rajoy publicly defended Princess Cristina prior to her testifying in the highly publicised corruption case. “I am absolutely convinced that things will go well for her,” Rajoy said in a TV interview with Spain’s Antena 3 in February this year. “I am convinced of her innocence.”

Despite the prime minister’s defence, the princess had to testify in a court in Palma de Mallorca in March of this year, amid major public protests against the royal family. The case is one of many high-level corruption scandals in Spain that have undermined faith in public institutions at a time when the economic crisis has resulted in deep cuts in public spending.

Whether or not Princess Cristina took part in, or knew of her husband’s alleged activities, is a key contention point in the heated debate surrounding the case. The princess was first linked to the case last year by judge Castro, who suggested that she could not have been oblivious to Urdangarin’s fraud. Castro’s ruling was thrown out by a higher court shortly after, giving him time to gather further evidence and name the princess as an official suspect for a second time in January 2014.

The scandal has gained extra traction as the presidents of the regional governments of Valencia and the Balearic Islands have both faced a string of corruption charges. Investigators claim that the fraud helped fund €3m in refurbishments to the aforementioned mansion. Crucially, documents have proven that the princess had signed herself as both owner and tenant of the home, implicating her in the matter.

Finally, the judge has questioned how the couple were able to obtain a €5m mortgage for said mansion, at a time when the Spanish economy and the royal family has cash concerns. This became an increasingly prudent question when the Barcelona residence was confiscated in order for the princess to cover her husband’s and Torres’ €6.1m bail.

A 227-page allegation
Despite objections from Spain’s anticorruption prosecutor Pedro Horrach, judge Castro has defended his arduous inquiry into the princess’ financials by arguing that this would clear up any lingering concerns about her involvement in the matter. Furthermore, the judge said putting the princess on the stand would remove “any shadow of suspicion” that she is receiving special treatment and thereby cement that justice is for everyone – no matter their social standing, El Pais reported.

This follows allegations from the defence of Ana María Tejeiro, Torres’ wife, who has been indicted since the start of the investigation in 2012. This stands in stark comparison to the princess, who, according to Tejeiro’s lawyer, has been treated as being above suspicion. This was apparent when he recently asked judge Castro whether or not “all Spaniards are equal before the law?”

When Princess Cristina was first named as a formal suspect in the case in April 2013, judge Castro’s allegations were overruled. However, following months of further investigation, Castro proceeded to issue a 227-page decree charging the princess with a different set of allegations, namely that she may have violated laws against money laundering and evaded tax on earnings linked to the organisation.

In the filing, Castro also made it clear that given the princesses’ role in Instituto Nóos and the Aizoon company, it would have been “difficult for Urdangarin to defraud Inland Revenue without his wife’s knowledge and acquiescence”, The Guardian quoted the judge as saying.

Princess Cristina and Urdangarin have refrained from responding to the new allegations, however the royal household said in an official statement on the judge’s summons that it had “maximum respect for judicial decisions.”

Preferential treatment?
The case has been marked by public sparring among Spanish legal authorities, as they and the public scramble to either support or oppose the monarchy. As mentioned earlier, Castro’s ruling went against the recommendations of anticorruption prosecutor Horrach, who has maintained throughout the case “that there was no evidence the princess had committed crimes”.

With the prosecutor and the judge carrying out separate investigations, several disagreements have arisen. This was most evident when the prosecutor in December 2013 said that the judge’s allegations were part of a “conspiracy theory”.

However, the prime minister’s aforementioned vigorous defence of the princess has further sparked concerns that the royal family might be receiving preferential treatment. Notably, opposing members of parliament have questioned how Rajoy could be so sure of the princesses’ innocence in order to be able to publicly comment on the case.

In a parliamentary debate in January 2014, some MPs even suggested that the prime minister’s statements had brought into question the Spanish separation of powers and that the judicial process surrounding the case was not as independent as it claimed to be, The Telegraph reported.

However, the Spanish Prime Minister maintained that justice would be served – no matter what. “I have to respect, as I’ve said before, the decisions of the judges and the prosecutors,” Rajoy said. “I would like, as the King very rightly said, for everyone to be equal before the law. As such, the princess also has a right to be presumed innocent,” he explained.

Consequences and reputations
However, her innocence is yet to be proven, as Princess Cristina only gave her first testimony in a Mallorca criminal court on 8 February 2014. The hearing itself was conducted behind closed doors, but Spanish and international media quoted a lawyer who was present during her testimony.

Manuel Delgado, who acts on behalf of a group that had joined the proceedings as a plaintiff, said that Princess Cristina had been “very prepared to evade any questions.” The Princess said she had trusted her husband to manage their finances, he explained, adding that she had replied “I don’t know or I don’t remember” to 95 percent of the questions asked, The Guardian reported.

In comparison, Princess Cristina’s lawyer, Miguel Roca, called the day a success: “The princess demonstrated that we are all equal before the law,” he told El Mundo.

Another member of her legal team, Jesus Maria Silva, denied claims that the the princess had been evasive during proceedings, saying that “answering yes or no is the opposite of being evasive.”

In the unlikely event that she is found guilty, Princess Cristina faces up to six years in prison for money laundering and a fine of three times the value of the money laundered, as well as further punishment for tax evasion.

Potential personal consequences aside, the case is also making it much harder for Spain’s royal household to distance itself from the corruption allegations surrounding Princess Cristina’s husband.

The scandal has already done an immense amount of damage to the reputation and image of Spain’s royals – an El Mundo poll revealed that 62 percent of people wanted King Juan Carlos to abdicate. What’s more, just over half of respondents said they did not support the monarchy – a finding that could further strengthen Spanish moves towards the country’s Republican past.

Whether or not the case against the princess will have such major consequences is yet to be seen; however, with sky-high unemployment leaving more than 680,000 Spanish households without any source of income, the allegations of frivolous spending and corruption has made the royal family seem even less in touch with the Spanish public. A public that is thirsty for someone to blame for the country’s ongoing austerity programme.