Although emerging economies have shown signs of a slowdown in recent months, Chile remains a global leader with a sound financial system 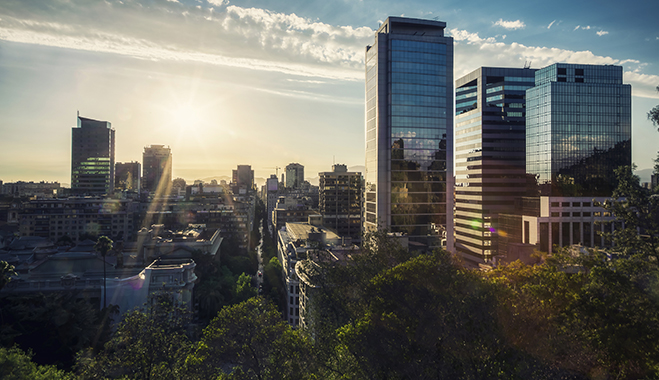 The financial centre in Santiago, where Bci’s headquarters are. The country's economic growth has not remained unnoticed by investors, as it became the top ranking Latin American country in the World Economic Forum's Global Competitiveness Index 2013-2014
Banking

In the last five years, Chile has posted in excess of five percent growth on average and showcased some of the most impressive economic fundamentals on the continent. Underpinned by social and political stability and consistent sub 4.5 percent inflation, the country has taken on a new significance for investors and multinationals looking for emerging economic opportunities.

The country’s healthy economic growth, longstanding political stability and hospitable business climate saw the World Economic Forum anoint Chile as the top ranking Latin American country in its Global Competitiveness Index 2013-14 (see Fig. 1). What’s more, the organisation gave it the lowest risk rating of all the leading countries in the region, with a low spread of 1.29 percent, as of May this year.

Against this backdrop of security and continued prosperity, Chile’s financial system has come on leaps and bounds, with loans having grown by over 11 percent in only the last four years. What’s more, its high levels of capitalisation, and in-decline default indicators have cemented the banking sector’s stature as a regional leader with formidable international influence.

The country’s on-going transformation has given rise to several impressive names, not least Banco de Crédito e Inversiones (Bci), which has set a precedent for those in Chile’s burgeoning banking industry for decades. It was over 80 years ago now that a small band of entrepreneurs joined together in Chile with the ambition to create a company capable of supplying formal and sustainable financing. Fast-forward to today and Bci is one of the region’s foremost financial names, lauded for its company culture and renowned the world over for its impressive track record.

An active role
Founded in 1937, Bci has played an active role in the development of Chile’s financial system, exhibiting evidence of its soundness and solvency throughout. The bank successfully overcame the crisis well before its peers, the same crisis that ultimately led to the crash of the Chilean banking sector in 1982, and demonstrated its high level of solvency through the course of the last major global financial crisis.

Today, Bci is the number three private bank in Chile, in terms of the loans and net income it has so far attained, its sustainable organic growth, and its strategy focused on bolstering the most profitable areas by means of a broader geographical spectrum. The firm’s size and success has also seen Bci post a return on average equity of over 20 percent, representing one of the highest rates of its kind in the national banking community.

Chile’s emergence as a major economic player in Latin America has come alongside the introduction of a fair few impressive corporate performers. And while there are various challenges to contend with – namely an overdependence on commodity prices, tax reform and trade union conflicts – the country’s leading performers are negotiating these hurdles with ease and creating the conditions to thrive.

By focusing on factors apart from financial gains and taking into account the issues affecting those in the community, Chile’s foremost financial players have cemented strong foundations for lesser names in the industry and influenced key developments in the national economy.

On the way to becoming one of Chile’s key banking names, Bci has taken special care to create and manage a sound organisational culture that puts people front and centre in all it does. The ‘happy employee = happy customer = happy shareholder’ equation is, therefore, a key aspect of its daily activities and perhaps the most important lesson that companies in the region should strive to replicate.

Whereas the bank’s retail division caters for the country’s general banking public, Bci’s commercial banking arm deals with companies whose sales range between $4m and $80m per annum. The bank’s SME offerings, however, were only recently created in 2013 and include microenterprise, entrepreneur and small business segments. The bank’s services in each of these sectors illustrate the extent by which Chile’s banking proficiency has advanced, as well as the rate by which demand for financial services among SMEs in the region has grown.

What’s more, Bci’s CIB services are targeted at large corporations, institutions, high net worth clients, and capital market players, whose requirements pertain to more complex financial matters. Bci provides these services through asset management and stock brokerage subsidiaries, which are in both cases the third best in the country’s banking sector. It has also an outstanding position in the sales and trading area, where it has managed to position itself in first place in the foreign exchange market. Again, the bank’s corporate and investment divisions prove that the capacity of Chile’s banking sector matches even those in more developed markets, and serves to underline the complexity of the country’s financial requirements at present.

Internationalisation and innovation
Based on Bci’s commercial structure, the bank has defined its strategic focus in such a way so as to ensure the best customer experience possible, and to attain a unique value proposal for the segments in which it operates. Always seeking innovation and new opportunities, Bci has embarked upon an ambitious internationalisation strategy and diversified its external financing sources in terms of investor profile.

Bci signalled the beginning of its expansion into international markets 15 years ago, by opening its first branch in Miami. The aim here was to launch an internationalisation process to explore both new markets and growth opportunities, and to expand upon the services available to its customers operating overseas. Fast-forward to today and Bci has signed an agreement to buy the fourth largest bank in Florida, City National Bank, marking the largest investment made by a Chilean company in the US, and one that makes Bci the first bank in Latin America to base major operations in that market.

The bank also has representative offices in Brazil, Colombia, Peru, Mexico, a service desk in Spain and, for some months now, has been seeking authorisation to open a representative office in Shanghai, which again highlights Bci’s commitment to extending its international coverage.

Not purely based on boosting its commercial presence, in 2013 the bank continued to actively diversify its external financing sources, geographical origin, and the kind of instruments used. And in February this year, the bank proceeded to issue its second 144A bond, an instrument that can only be purchased by qualified investors. The amount issued was $500m, with a 10-year maturity at an annual interest rate of four percent. Bci also issued three bonds in the Swiss market, the first worth $225m with three-year maturity, the second $135m with two-year maturity, and the most recent issue in June 2014 worth $167m with a five-year maturity.

Moreover, in 2013 Bci continued with the commercial papers programme in the US, maintaining the high rating it received in 2012 from Standard & Poor’s (A1) and Moody’s (P1). Such a programme enables Bci to issue short-term securities in the US market of up to $1bn, and the bank had issued $497m by year’s end. In brief, the continuation of the bank’s strategy to increase and diversify its foreign financing has allowed it to secure new funding from abroad in recent years, thereby reducing the financial cost of borrowing and endorsing Bci’s growing international renown as well as the status of Chile’s financial services sector.

Corporate citizenship
Nevertheless, Bci’s growth is not only evident in its good economic and financial performance, but equally in areas of transparency, CSR and innovation. A commitment to matters quite aside from financial performance is today expected of companies in Chile, given its high standing on the global economic stage, and Bci has quickly proceeded to set the precedent to which others should aspire.

Transparency is a core value for Bci, given the role it plays in forming long-term relations with stakeholders, who represent the root of the bank’s successes. To manage this, Bci has developed a specific strategy focused on three aspects: maintaining its leadership in transparency, enhancing long-lasting customer and employee relations, and protecting consumers and workers.

Maintaining sound supplier relations has always been part of the corporate mission of the bank as it strives to forge mutually beneficial relations, loyalty, high quality standards, compliance and transparency, always offering them fair and friendly treatment with sustainable long-term dialogue.

With Bci at the helm, Chile’s standing in the global financial services sector looks only to continue on up, as the emerging economy sets its sights on new market opportunities and reaffirms its status as a fertile landscape for growth and prosperity.