For how much longer can Hong Kong’s currency stay pegged to the dollar?

For more than 30 years, Hong Kong’s currency has been pegged to the US dollar, but with the Fed raising rates and China’s economic slowdown, it could be the end of the LERS 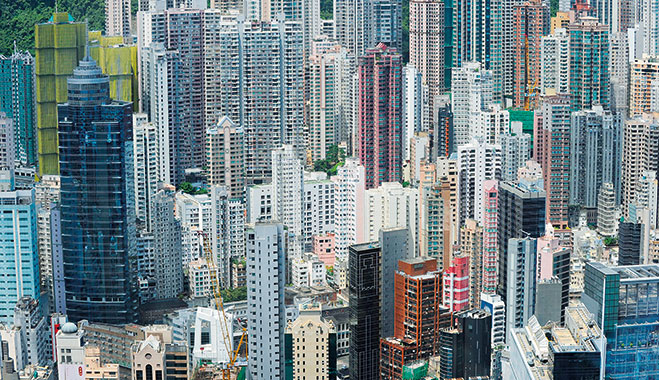 Residential and commercial properties in central Hong Kong. Hong Kong’s currency has been pegged to the US dollar for more than three decades, but recent economic changes have begun to impact negatively on wages and property prices
Banking | Central Banking
Author: Aaran Fronda

Since the US Federal Reserve chose to lower interest rates in reaction to the economic turmoil that followed the financial crisis, China’s economy has gone from strength to strength, with the country boasting impressive annual GDP growth statistics year-on-year. All this combined to create an extremely favourable environment in Hong Kong for the past decade, but now the city-state looks likely to face some serious challenges.

The influx of cheap money since the US adopted a monetary easing policy in the wake of the 2008 financial crisis has served to increase capital inflows for investment in the city, with depressed rates helping to raise Hong Kong’s aggregate banking balance by more than HKD 300bn ($384bn). At the same time, historically low interest rates led to investors looking for a more profitable haven, Hong Kong being among them. It was no surprise then that the head of the Hong Kong Monetary Authority (HKMA), Norman Chan Tak-Lam, expressed concern over a US rate hike and the impact it would have on the capital outflows and the general economic prosperity of the city-state.

Braced for repercussions
However, prior to the rate hike, bankers in Hong Kong were more concerned about the impact of policy decisions emanating from Beijing, with the CEO of Christfund Securities telling South China Morning Post that investors were prepared for a rise in US interest rates, but that a devaluation of the renminbi is the real worry.

“I do not think it will shock the market even if the Fed will decide to increase the interest rate this week,” Cheung said. “The devaluation of the yuan, as well as whether Beijing has enough measures and policies to rescue the weak stock markets in the mainland, may have a bigger impact to the Hong Kong stock market outlook than the US rate rise.”

Interestingly, when the US finally did raise its base interest rate by 0.25 percentage points in mid-December, Hong Kong’s economy was buffered against the hike by the mainland’s decision to cheapen its currency, but only slightly.

“We had the best of all worlds for years — we had very low US rates and a boom in China,” said Frederic Neumann, Co-Head of Asian economic research at HSBC in an interview with the Financial Times. “Now China is slowing and the Fed is raising rates, so we get a double whammy for Hong Kong.”

The temporary cushion that the renminbi devaluation provided from rising US interest rates is the result of the territory’s currency being pegged to the dollar, while its economic future is becoming increasingly tied to Chinese mainland. As this trend continues, with China choosing to expand its trade links with the special administrative region (SAR), the question of whether or not the Hong Kong dollar should break away from the US and peg itself to the Chinese renminbi will be increasingly raised.

Since the handover of Hong Kong from the UK to China, the city-state has gradually become more and more integrated with the economy of the mainland

Stick or twist
Since the handover of Hong Kong from the UK to China, the city-state has gradually become more and more integrated with the economy of the mainland, with more than half of all exports coming out of Hong Kong finding their way to China.

What is more, the tourism and retail sectors in Hong Kong, which account for roughly a 10th of its GDP, are bolstered by the special relationship it has with the People’s Republic. In fact, just by looking at the substantial increase in the amount of trade and the financial flows between the SAR and the mainland it is clear that China now plays an increasingly dominant role in determining Hong Kong’s economic future.

“Hong Kong is more integrated with China now and so its economy could be dragged by China’s slowdown,” Mole Hau, a Hong Kong-based economist at France’s largest bank, told Bloomberg Business. “On the other hand, Hong Kong’s monetary policy has to follow that of the US – that’s quite a dis-coordination for the city.”

After the Fed raised its base rate for the first time since the financial crisis, the HKMA followed suit – raising its key rate by 0.25 percentage points to 0.75 percent. This decision was taken during a period when emerging markets and advanced economies the world over have to adjust to a slowdown in China. The combination of raised rates and increased levels of volatility emanating from the mainland has put the world, in particular Hong Kong, under renewed pressure at a time when it needs it least.

“Closer integration with mainland China has delivered several benefits to Hong Kong SAR, particularly by way of an appreciable boost to tourism and financial services, and the offshore RMB business in the last five years,”ssssssss the IMF said in a report. “Hong Kong SAR remains well placed to act as the leading platform to intermediate two-way flows in and out of the Mainland as it opens its capital account.

“At the same time, the deepening linkages through tourism, cross-border bank lending, issuance of RMB and USD securities in Hong Kong SAR by Mainland entities, and equity market connect schemes also create more channels for transmitting shocks from the Mainland.”

Dollar allegiance
The Linked Exchange Rate System (LERS), which is the mechanism that forces the HKMA to adjust the city’s monetary policy in line with the Fed, was originally implemented in response to the Black Saturday crisis in 1983 in order to provide greater stability between the HKD and the USD. Since then, and with the recent rise in rates – combined with the increased levels of economic integration between the city and the mainland – some commentators suggest that it is now time for Hong Kong to start considering a new exchange rate regime.

“Over the next decade it would make sense for the Hong Kong dollar if it is pegged to anything, to be pegged to the renminbi,” said Michael Hasenstab, Chief Investment Officer of Templeton Global Macro at Franklin Templeton Investments in an interview with CNBC.

Because the LERS forces the HKMA to adjust its interest rate in line with the Fed, it prevents Hong Kong from being able to adequately deal with inflation and other economic challenges it may face. This has naturally led some to blame the LERS for the overheating of city’s property market, which been rising year-on-year for the last decade, as increased demand has been forced to compete with decreased supply.

This ongoing trend means that Hong Kong homes by square foot are the most expensive in the world. In fact, according to CBRE’s recent Global Living Report: A City by City Guide, homeowners in Hong Kong are paying around $1,416 per square foot, while Londoners come in at a close second, paying $1,025, and New Yorkers a mere $842.

With sky-high property prices and wages stagnating in the city, there is likely to be a renewed debate over whether or not the government should switch to a floating exchange rate regime, or even peg it to the renminibi. But, despite the fact that Hong Kong has been handed back to China and the mainland has embarked on an unprecedented and prolonged period of economic growth, along with the increased acceleration of renminbi internationalisation, the conditions are still not yet right for Hong Kong to peg its currency to the yuan.

“The Hong Kong economy is too small to adapt to a free float,” said Wilson Chan Fung-Cheung, a senior consultant at the Hong Kong Institute of Bankers in an interview with the South China Morning Post. “A currency-basket system lacks transparency. A peg with the yuan will not happen in the near future as the currency is not yet freely convertible.”

Another reason why the peg is unlikely to change anytime soon is that Hong Kong relies on it as a means of providing credibility among western investors. This is due to the relatively smooth manner in which the LERS functions, which is a characteristic that stems from the strong institutional, legal and policy framework that exists in Hong Kong.

Not only that, but there are considerable fiscal reserves to draw upon, which are capable of softening the city’s landing should its economy face any unfavourable shocks from outside. Therefore, for the time being at least, it appears that the LERS is the best option for Hong Kong, as it provides a decent anchor, giving the city-state the stability it requires at a time when global market volatility is high.