There is a growing need for new, improved infrastructure in emerging markets, but a lack of investment is stopping key projects from getting off the ground 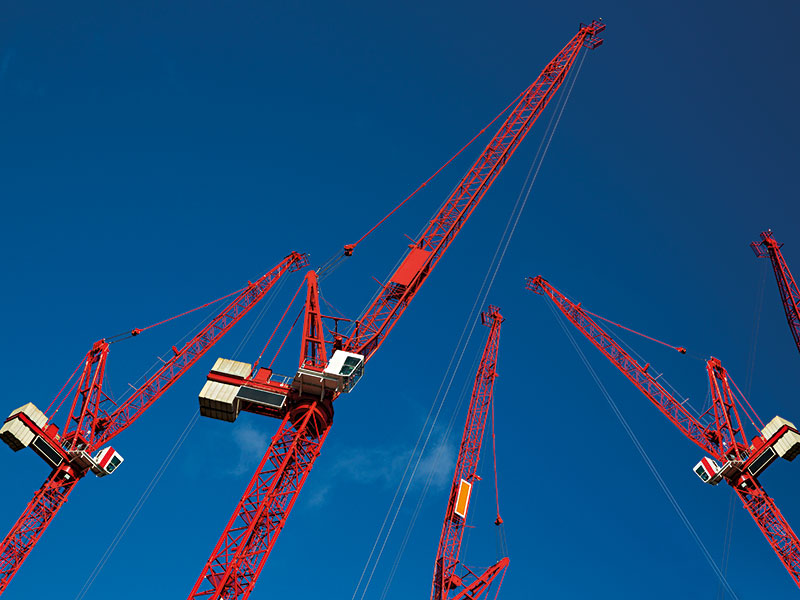 As the world meets in Davos to survey the economic situation around the globe, a fairly consistent view emerges: countries have generally high levels of public debt, lower-than-desired rates of economic growth and job creation, and historically low interest rates providing little incentive to save. Added to this, many also have acute problems of youth unemployment as the world has moved to globalised, automated and streamlined production and services alike.

Looking at Europe, these issues are compounded by social and economic pressures, due to unfavourable demographic trends and high migration levels produced by conflict and economic distress in neighbouring countries. Viewed through the lens of emerging market countries, the imperative to achieve economic growth – while encouraging quality investment that raises living standards and competiveness – is a real-world issue that, if left unfulfilled, will negatively affect political and social stability.

And yet, while many emerging market countries do appear to be stuck in transition at present, these same countries currently have opportunities to attract investment due to a unique set of circumstances.

Today, around 20 multilateral development banks (MDBs) are active, including the newly created Asian Infrastructure Investment Bank and the New Development Bank. According to recent G20 estimates, the operational commitments of major regional MDBs and the World Bank Group total around $80bn to $90bn annually. But despite this substantial balance sheet potential, MDB operations cover less than five percent of the total infrastructure gap for emerging markets.

The gap between the ability of MDBs to provide direct funding and the latent and real demand in emerging markets has focused international debate on how MDBs can catalyse more third-party financing – particularly private finance from commercial banks and non-bank financial institutions – to cover more of the financing needs. Given constrained fiscal balance sheets, it is clear much of this new investment will need to come from the private sector.

Growing interest
Following the global financial crisis, a downward trend in interest rates set in across most developed countries, a situation that persists to this day. Given the duration of such low rates, even naturally risk-averse investors, such as pension funds and insurance companies, have become increasingly interested in diversifying a portion of their portfolios into higher-yielding investments in emerging markets.

Due to the unique nature of infrastructure projects – very long-lived assets with relatively stable revenues – such investors have woken up to emerging market infrastructure as a type of investment where they would like to increase their share, which currently stands at just 1.1 percent. A 2016 survey by EDHEC and the G20 Global Infrastructure Hub (GIH) revealed that 70 percent of institutional investors want greater portfolio exposure to emerging markets infrastructure. With some $50trn of assets under management belonging to institutional investors, a two percent asset allocation by this massive pool of capital would account for $1trn.

In 2015, Moody’s published an influential report reviewing the performance of some 1,400 PPP projects from the mid-1980s to 2014. The report showed they have a comparatively low default rate of three percent – lower indeed than the default rates of some 6,000 general project finance loans (six percent) during the same period. Furthermore, it was shown there is no statistically significant difference between the default rates of infrastructure in emerging market countries versus developed countries. This conclusion should help close the gap between ‘perceived risk’ and ‘real risk’ for investors.
The passage of SDGs in 2015 has focused the need for cleaner investment that deals with both climate change mitigation and adaptation. Donors, international financial institutions (IFIs), international banks and industrial players have all committed to ambitious investment targets, where resource efficiency and sustainable infrastructure will be central to the action plan over the next 15-20 years.

Supporting the infrastructure agenda
If there is such need for clean, high-quality investment with higher yields, and the emerging market infrastructure sector offers a place for capital to be attracted, why isn’t more happening? The answer is simple to identify, yet complex to solve: due to weak institutional capacity in the public sector, there are not enough investible projects available.

This deficiency leads to projects that are too often presented to the market with unacceptable structures and unpalatable risks. Multiple barriers curtail investment in emerging market infrastructure: major risks are related to local currency and convertibility, political and regulatory uncertainty, and a lack of certainty surrounding revenues, tariffs and project-based cash flows. The result is too many failed tenders leading to, ultimately, underinvestment in infrastructure.

The response that has formed over the past four years, led by IFIs, the G20, OECD, WEF, key bilateral donors and other key development finance organisations (DFIs), has coalesced around a multifaceted joint agenda for infrastructure support. There are four primary areas of support for this agenda: first, a number of project preparation facilities (PPFs), with some $300m committed in total, have been formed to create a deeper pipeline of well-prepared, investible projects for the benefit of emerging market countries. In addition, many of these countries have created national-level PPFs to boost pipeline development.

The external support for deeper and better prepared pipelines can only be sustained if emerging market governments invest in the institutional capacity to select, plan, prepare, tender and monitor quality infrastructure. As a complement, the International Infrastructure Support System (IISS) is a platform for project pipeline dissemination led by the local country managers and supported by all major IFIs, using standardised templates for each subsector project type.

Second, there is an acute need to disseminate leading practices and build capacity. The PPP Knowledge Lab is an online space that consolidates all major policy outputs across IFIs, and features outputs by the PPP Infrastructure Resource Centre, the Public-Private Infrastructure Advisory Facility and regional IFIs. OECD’s extensive programme of research and policy advice has focused on infrastructure in emerging market countries. The PPP Certification Programme, supported by the IFIs, provides for the first time a standardised body of knowledge emerging market governments can use to train their key staff on PPPs. Third, policy initiatives are critical to sustaining the lessons learned across countries and regions, while also stimulating innovation. Building on the successful ‘PPP days’ organised by IFIs since 2004, the Global Infrastructure Forum, which held its inaugural meeting in 2016, is set to annually bring together the heads of all IFIs with the UN Secretary General to provide high-level direction.

The G20’s GIH, created under the Australian G20 presidency in 2014, is producing a suite of knowledge products, ranging from the PPP guide to the capability framework to boost private sector investment in particular. The WEF’s Strategic Infrastructure Series, meanwhile, provides insights informed by its Global Agenda Council on Infrastructure. Finally, the Global Infrastructure Connectivity Alliance, created by the G20 in summer 2016, was established to disseminate lessons learned on critical cross-border corridor development that facilitate global trade and inform major new efforts, such as the Belt and Road Initiative.

Finally, risk mitigation, credit enhancement and blended finance are particularly active agendas for IFIs. The World Bank’s Multilateral Investment Guarantee Agency’s panoply of risk insurance products is now complemented by new credit enhancements, such as the Managed Co-Lending Portfolio Programme, where the Swedish International Development Cooperation Agency provides first-loss coverage at scale for IFC loans which are offered on an automatic pari-passu basis to institutional investors, such as major insurers.

The Sustainable Development Investment Partnership includes some 50 entities (donors, IFIs, DFIs, global banks and other international organisations) that seek to provide coordinated credit enhancement and other means of support to accelerate investment in emerging market countries. Convergence, which has been backed by the Government of Canada, WEF, OECD and the Ford Foundation, also provides risk mitigation for particular project finance deals, especially in lower income countries.

Local expertise
With over $300m available, there are enough resources in IFIs’ PPFs to prepare and tender out more than 150 complex infrastructure projects over the next 24 to 30 months across emerging market countries. If successful, the global project capex result would be approximately $30bn, assuming a $200m-per-project capex value. But for this to happen, the PPFs need to become fully operational by getting the mechanics right.

They need to be selective by subjecting each project request to a vetting process, so as to understand the basic business case, verify the readiness of the legal framework, analyse affordability, and do an initial assessment of the main risks to identify potential deal-breakers. Once this ‘phase zero’ vetting is done, high-quality advisors are needed. The European Bank for Reconstruction and Development’s (EBRD’s) IPPF, for example, has a roster of four internationally experienced and pre-selected external ‘framework consultant’ consortia which are able to be called off and mobilised in eight weeks. Part of this accelerated delivery is about such basic mechanics.

Another key aspect is knowledge transfer: the PPFs should make a conscious effort to work closely with clients using local experts. As countries like Chile, Korea, Singapore and Taiwan know from their respective development pathways, capacity building takes a dedicated long-term investment in your own people. There is no shortcut.

The PPFs should also seek to collaborate wherever possible, including joint funding and joint preparation of complex deals. Finally, IISS holds great promise, with a minimum target of 500 projects to be uploaded onto its cloud-based platform by 2020, in an effort to make IISS the go-to place for project pipeline information.

Knowledge that sticks
Knowledge platforms, such as the innovative PPP Knowledge Lab, have great potential to become primary destinations for public sector officials seeking to understand leading practices and lessons learned. However, IFIs, DFIs, donors and other international organisations need to follow up this offer with frequent regionally specialised ‘policy seminars’ that focus on real-world cases: what works, why and how.

The PPP Certification Programme offers the potential for a critical mass of emerging market and developing economy officials to learn the same set of PPP basics that the private PPP industry knows and employs when entering into contracts.

The programme should help reduce the level of knowledge asymmetry that exists today, which can lead to unbalanced PPP contracts that are prone to restructuring. The aim should be to have 50 countries with 20 people each – 1,000 key figures in emerging market countries – PPP-certified by the end of 2018.

What is striking is there seems to be little standardisation across the formal MDB risk products offered. What is also apparent is the annual mobilisation contribution of these instruments has been extremely limited, making at best a marginal contribution to crowding in
private sector finance.

As a key enabler of global economic growth and jobs creation, achieving accelerated infrastructure investment in emerging market countries will require a deeper pipeline of bankable projects coming to market, supported by a suite of streamlined, standardised and comprehensive risk mitigation products to credit enhance projects. These efforts will need to be reinforced by policy dialogue and sustained capacity building, focusing on local expert networks and officials committed to the agenda.

And let us remember: the wall of institutional money waiting and wishing to move into emerging market infrastructure will only do so if the project opportunities to do so are clear, transparent and backed by enduring public policies and regulations.

This leads to a final consideration: governments must summon the political will to create the institutional and market conditions that in turn provide fertile ground for infrastructure investment. EBRD’s more than 25 years of experience of development banking has proven there is no substitute for a strong and committed local counterpart on the other end of international development projects – and infrastructure
investment is no different.