Traditional cities and buildings are constructed in a way that makes them particularly vulnerable to terrorist attacks. Now, architects and city planners are working towards a more resilient future 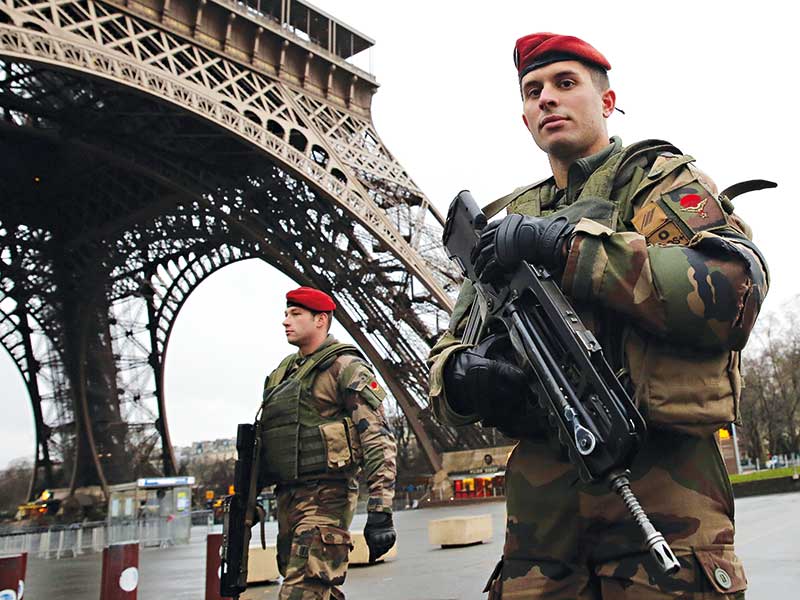 For the second half of 2016, what was once a casual stroll along Paris’ Champ de Mars became a markedly more stressful affair. In order to secure the site during the Euro 2016 football tournament, fences and security checks were put in place, surrounding the base of the Eiffel Tower and forcing visitors to pass through a gate before they could continue. It’s an understandable concern given recent events; terrorist attacks claimed 328 lives in France between January 2015 and July 2016.

In January 2017, the Paris mayor’s office proposed the construction of a 2.5-metre bulletproof glass wall around the Eiffel Tower as a more permanent solution to the problem of terror threats. The development would prevent both vehicles and people from attacking the site, while still allowing tourists to walk under the structure once they had passed a checkpoint.

“The terror threat remains high in Paris, and the most vulnerable sites, starting with the Eiffel Tower, must be the object of special security measures”, Deputy Mayor Jean-Francois Martins told a news conference, when the €20m ($21m) project was announced. Critics said the project would make the tower look more like a fortress. However fair this criticism, the looming threat of terrorism is too great to ignore.

Modern buildings are now equipped to survive larger strikes from aircraft, and boast much stronger foundations

The fear that public spaces could be turned into disaster sites with no warning is contributing to the future of both architectural design and city planning. From hidden and practical safeguards to entirely rethinking the way that cities are organised, streetscapes and buildings are changing in subtle (and not-so-subtle) ways in order to defend against unpredictable threats.

City planning
The challenge of how to design cities and buildings to resist – or at least discourage – terrorist attacks is one architects have been wrestling with for some time. The question is how to incorporate defensive measures while still allowing the city or structure in question to run smoothly.

Thomas Fisher, Professor of Architecture at the University of Minnesota, told World Finance the issue began to receive greater attention from US architects following the 1995 bombing of the Federal Building in Oklahoma City, and even more after the attacks on the Pentagon and World Trade Centre in 2001: “In the first case, it led to rethinking the landscapes around buildings, with bollards and setbacks being the primary response to stop truck-bombs.” The attack in Oklahoma took advantage of just how accessible many of the US’ government buildings were. Many were located close to the sidewalk, allowing anyone to walk up to the front door.

The incident prompted a number of swift changes. In the month following the attack, a two-block stretch of Pennsylvania Avenue, the location of the White House, was closed to traffic to prevent a similar attack. The General Services Administration also reviewed its regulations and established new standards for buildings. This included requirements that buildings be a certain distance away from the street, use blast-resistant glass, and implement designs that prevent floors collapsing.

In response to the September 11, 2001 attacks, modern buildings are now equipped to survive larger strikes from aircraft, and boast much stronger foundations. While these changes are mostly behind the scenes, more obvious and public security measures have also been taken.

Public security
Now a standard in any urban setting, bollards have become one of the leading recommendations when it comes to establishing permanent defensive structures. With the right construction, a few stumpy pillars can stop a truck in its tracks. In response to criticisms that bollards represent the militarisation of urban infrastructure, many are now disguised as lights, public art, or even planters. However, they do have their shortcomings. “Bollards are effective, but it is hard to defend public streets with them if shared by people and vehicles”, Fisher said.

One recent case in which bollards may have helped was the truck attack on the Breitscheidplatz Christmas market in Berlin. With a run up of 80 metres, a truck crashed into the crowded stalls, killing 12 people. While bollards may have been able to stop the truck, the site would have been far less accessible in the months when the Christmas market wasn’t there. The same could be said for the attack in Nice on Bastille Day 2016: bollards may have been able to stop the truck, but without knowing a specific target or location, fortifying an entire city is impossible without altering it beyond recognition. There is also the danger that excessive urban protection measures could slow down emergency response times.

“A raised steel plate in the street, able to be lifted during events in which the street has a lot of pedestrians, and lowered flush with the street surface other times, is one way of accommodating both”, said Fisher, adding that Bourbon Street in New Orleans is already using such a system effectively.

Bourbon Street is located in the heart of the New Orleans French Quarter, and is home to countless bars. The street is a year-round tourist hotspot, but gets seriously crowded during Mardi Gras. In January, in light of the attacks in Berlin and Nice, New Orleans unveiled a $40m citywide public safety plan. As well as more security cameras and better lighting, the plan involved the installation of a rising steel barrier to limit vehicle access to the street.

These devices are common sights in the car parks of government buildings or embassies, but their use on the average street is uncommon. According to The Times-Picayune, New Orleans’ Director of Homeland Security Aaron Mille said the barriers are a more efficient solution than regularly closing the street with temporary barriers or police cars.

Digital haven
While defensive edifices (such as the proposed wall around the Eiffel Tower) and street-blocking structures are becoming more common, they do not make targets unreachable. Fisher said these efforts have the potential to backfire, and may even be regarded as a challenge by attackers.

“A bulletproof glass wall might stop gunfire, but what is to stop a terrorist lobbing a grenade over the wall or dropping something from the Eiffel Tower?”, he said. “There is no end to the possible ways that terrorists can cause terror, and so our response needs to be: first, refuse to be terrorised since the chances of dying at the hands of a terrorist are much less than, say, a lightning strike; and second, stop creating targets that tempt terrorists because of the publicity an attack there can create.”

In an article published on the Conversation website, Fisher argued that what could prevent or limit an attack was a rethinking of urban structures in more distributed ways. While a single large office building can be seen as a gigantic target, attacking a distributed and spread-out network of buildings would require substantially more effort. One example of more resilient design Fisher mentioned is the souk; a traditional marketplace common in the Middle East.

“We have designed cities to be full of targets, concentrating people doing a certain activity or working in a particular organisation in large buildings that become vulnerable to terrorism, either via a direct attack from a plane or truck-bomb, or via an indirect or distant attack that might, for example, bring down the power grid.”

The souk, on the other hand, is a connected maze of markets and can survive an individual attack. While a single incident may disrupt a number of shops, it could only ever affect a fraction of the market as a whole.

According to Fisher, the internet presents such an opportunity for keeping businesses safe: “In the digital age, when people can live and work remotely and when people can use a diversity of semi-public places to work and meet – libraries, coffee shops, co-working spaces – we need to question the wisdom of concentrating people as we have in the past and consider a distribution strategy that is more resilient, not only in the face of terrorist threats, but also in terms of energy use and community health.”

Rethinking society
Fisher believes that, in terms of terrorism and architecture, we are now at a fork in the road. “We can continue to turn our built environment into a set of fortress buildings, with pervasive surveillance and great distances between structures and streets, or we can respond more creatively by rethinking how we live and work, and by asking the most important question of all: ‘What has led to terrorism, and what can we do to mitigate the conditions that cause people to want to enact terror?’ The latter will be the only permanent solution, and will be much less costly than what we are doing now.”

While the more immediate responses to the growing threat of terrorism are likely to be the installation of blast proof windows, retrofitting older buildings is not entirely practical. Rethinking society in a way that is resilient to disruption, not just terrorist attacks, may be inevitable.