Myanmar has undergone a seismic shift in recent years, and its financial institutions are reaping the benefits as a result. Among them is KBZ, the country’s leading bank 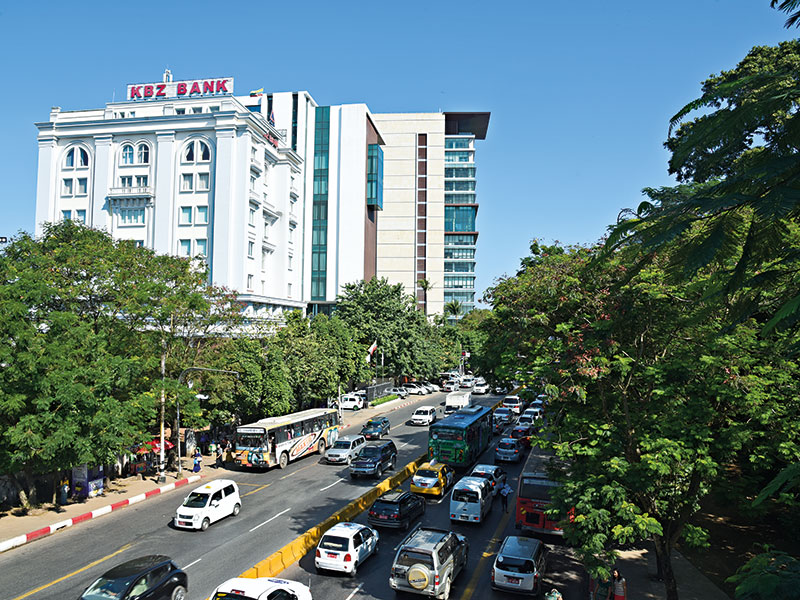 Over the past five years, Myanmar has undergone a transformation. Separated from the rest of the world for almost five decades under economic sanctions and an authoritarian military leadership, the country lagged severely behind the rest of the world, including its regional neighbours. But a host of economic and political reforms since 2011 – not least following Aung San Suu Kyi’s historic electoral victory in November 2015 – have started to turn things around, and now the country’s financial sector is beginning to feel the benefits. Among those benefiting is KBZ, the biggest bank in Myanmar. Through a strategic, long-term approach, the company is paving the way for a sustainable economic future, implementing innovative corporate social responsibility programmes and setting out ambitious plans for both its people and operations.

World Finance spoke to U Nyo Myint, Senior Managing Director of KBZ Group of Companies, about how the bank has changed over the years, how it is helping the country’s economy to develop, and what lies in store for its future.

How did KBZ Bank start out?
Kanbawza Bank (KBZ) was established in Taunggyi in the Shan State in 1994. It started as a privately owned bank, and remains the largest one in Myanmar today. In 1999, the current management – led by U Aung Ko Win and his family – took over operations, and over the last two decades the company has established a firm position in the local market.

KBZ prides itself on being an ethical institution committed to improving the lives of its employees, customers and communities, and has been instrumental in supporting growth in the local community. The company started out with just one branch and now has 420. It has also recently started to expand into regional markets, with representative offices in Bangkok, Singapore and Kuala Lumpur.

The bank is the most profitable organisation in Myanmar and has been acknowledged as the highest tax contributor in the country for the past four years, occupying a market share of more than 40 percent in the banking sector (in both the commercial and retail segments). The bank outperforms its peers in several areas, including customer experience, product delivery, financial performance, innovation and resilience, with its key pillars – investing in technology, human capital, career opportunities and social responsibility – helping to drive its success.

What forces have shaped KBZ into the bank it is today?
The strategic approach taken by KBZ’s chairman, U Aung Ko Win, has played an important role in the bank’s success. Prior to 2012, Myanmar’s financial sector was significantly behind that of its neighbours, with the country having been under military control for more than five decades. In late 2012, when Myanmar began liberalising its economic and financial sector, KBZ led the way, adapting to the new challenges and demands facing the sector and undergoing several changes.

The bank’s transformation helped distinguish it from others in the sector. It recognised the need to introduce a forward-thinking approach in order to ensure long-term, sustainable growth and remain competitive, both among local and foreign institutions.

In 2013, KBZ implemented a ‘four diamond arrowhead’ strategy, which centred on building human capacity, leveraging technology, realigning the business and strengthening corporate governance and risk management functions. The transformative strategy has allowed the bank to adapt effectively to the changes brought about by regional and national reforms, the success of which has been demonstrated by its consistently strong financial performance and sustained leading position.

What have been KBZ’s most notable achievements over the years?
KBZ has invested significantly in helping to improve the living standards of local communities. The bank has also contributed to Myanmar’s overall economic growth, creating jobs and providing career opportunities to people of all backgrounds through an open, positive working environment.

On the back of its financial performance over the past four years, KBZ has received recognition from international publications including World Finance, The Banker, Euromoney and Asian Finance, as well as Finance Asia, who named it the best domestic bank in Myanmar. KBZ also received the Highest Taxpayer Award (2012-2015) from the Myanmar Government, and was named the most transparent company in Myanmar by the Myanmar Centre For Responsible Business. The ASEAN Business Community, meanwhile, gave the company the title of Most ASEAN-Admired Enterprise in Myanmar.

How has Myanmar’s changing political and economic landscape affected KBZ?
Under the newly elected democratic government, Myanmar is undergoing another economic and political transformation. The new regulations for banking, investment, insurance, capital market and trade will result in further liberalisation of the industry, bringing new growth opportunities, as well as new challenges. The US Government also recently lifted its economic sanctions against Myanmar; this is likely to fuel further interest for investment in the country (see Fig 1). As that happens, KBZ will need to work hard to ensure it retains its leading position in the market.

As an ASEAN member country, Myanmar is also subject to regional and international reforms that could affect its economy, such as the ASEAN Free Trade Agreement. KBZ is confident the strong foundations it has laid will ensure the bank is able to effectively reposition itself and meet the challenges while reaping the opportunities.

Given the size and influence of KBZ, how is the company helping to further develop Myanmar’s economy?
The banking and financial sector will prove vital in supporting Myanmar’s growth going forward. The country’s liberalisation – which began in 2013 and led to unprecedented growth in the sector – and the emergence of foreign banks, insurance companies and stock broking companies has contributed significantly to Myanmar’s overall economic growth. A new approach to banking is now needed given the entrance of multinational corporations, the growing demand for sophisticated products and new requirements for funding.

As the largest bank in Myanmar – with the highest number of touch points in terms of branches and electronic service terminals – KBZ has a key role to play in this development. The bank has focused on modernisation, and its ongoing investment in technology has helped bring about new products while improving service delivery and sustaining growth.

With the sector’s overall development in mind, KBZ has made its people a priority, investing in leadership programmes and talent management initiatives in order to enhance productivity. KBZ was the first local bank to pioneer an internship programme: working with the University of Yangon’s Institute of Economics, the programme is designed to give final year undergraduates a route into the banking industry. KBZ has also expanded its offering to staff more generally by adding another training institution.

The company is also working hard to improve penetration and make banking accessible to more people, with a channel strategy in line with the government’s aims of increasing inclusivity in the finance sector.

As in other developing countries, SMEs are one of the key pillars for growth in Myanmar, which is why KBZ has provided funding to help them develop. To this end, the company created a unique Business Banking Division, complementing the Retail and Wholesale Banking segment, which is designed to offer products with flexible repayment terms. KBZ also adopted the tag line ‘we grow with you’ to signify its commitment to the SME segment.

Outside SMEs, the company has collaborated with financial institutions, world organisations (including the World Bank, IMF, IFC and ADB), and the government to further develop Myanmar’s economy in terms of infrastructure, utilities, trade flows and imports.

In the past five years, KBZ has set aside more than $100m to support its CSR programme. Through the KBZ Brighter Future Myanmar Foundation, the company has undertaken numerous social responsibility projects based around community development, disaster relief, education, religion, women’s health and beyond.

What does the future have in store for KBZ?
KBZ has set a tall order in attempting to retain its leading position in Myanmar’s financial sector, and is looking beyond its shores to further expand on a regional scale. In order to achieve this, a new five-year strategic plan has been laid out, which seeks to further develop the company’s people, enhance its technology offering, strengthen its balance sheets and improve overall governance and risk framework in order to meet international standards.

The future certainly looks bright, with projected economic growth of eight to 10 percent over the next five years, according to various bodies (including the IMF, ADB and McKinsey). The country has also been referred to as southeast Asia’s ‘last frontier’, and the recent lifting of the US sanctions should drive both foreign and domestic investment across its underdeveloped sectors. KBZ is optimistic about the economic changes predicted for the future, and as the country’s leading bank it is certainly in a strong position to benefit from the positive climate those changes will bring.

For more on KBZ Bank and Myanmar’s financial sector, have a look at World Finance‘s 2017 Guide to Banking in Myanmar