Few countries have faced as many challenges as Portugal during the Great Recession, making its resurgence as a stable investment partner all the more momentous 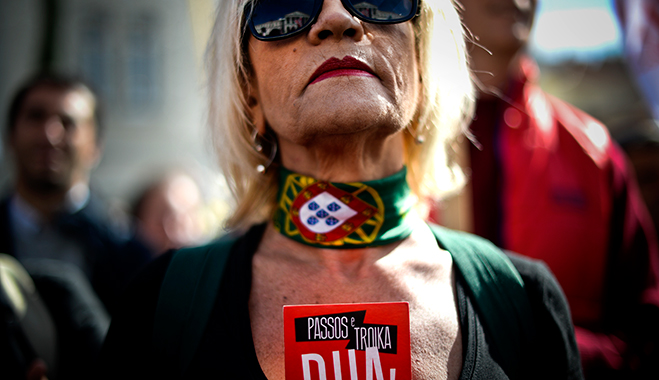 A woman protests against salary cuts and public sector reforms stipulated in the Portuguese government's 2014 budget. There are still challenges ahead for the country's economy - particularly in regards to its unemployment rate - but a financial adjustment programme has helped it in other areas
Banking
Author: Rui Constantino, Chief Economist, Banco Santander Totta

In June, Portugal formally concluded the three-year economic and financial adjustment programme agreed with the EU/ECB/IMF, under which it received financial assistance in the amount of €78bn, subject to a process of fiscal adjustment, economic reforms and financial sector rebalancing.

The challenges posed to the Portuguese economy were massive, and while the environment under which the adjustment took place was also far more adverse than initially envisaged, a significant improvement has taken place at all levels. Nevertheless, challenges remain, with the adjustment required to continue in the near future.

In 2011, Portugal faced massive twin deficits, fiscal and external, at around 10 percent of GDP. An unbalanced growth model meant Portugal was unable to defend itself from the impacts of the Great Recession, with the subsequent fiscal stimulus resulting in a deterioration of the situation that blocked it from acceding wholesale markets and requiring financial assistance (see Fig. 1)

There were three main objectives to be achieved under the programme:

Repaying the debt
The conditions under which the programme was implemented were harsh, as the euro area fell into a recession, also contributing to a deeper recession in Portugal, which, in turn, had side effects on economic, financial and fiscal developments.

It should be noticed that, unlike other countries, Portugal’s financial sector was not at the heart of the crisis – even though it contributed to the overall leverage – but rather, it fell victim to the deteriorating environment: loss of market access impacting funding; worsening economic conditions resulting in deteriorating credit quality; and the need to deleverage all impacted the banking sector, which faced severe losses.

In 2014, however, banks had reduced the loans-to-deposits ratio to 120 percent as requested, mainly through increased retention of deposits, which didn’t face any flight during this period. This eased the pressure on the banking sector, which is gradually becoming more focused on lending to the non-financial corporate sector.

Banks had to recapitalise, partly using some of the €12bn recapitalisation fund created under the programme, complying with a 10 percent core Tier 1 capital ratio (under BIS II). By the end of June 2014, a significant part of these funds had been repaid or banks had committed to repay them before year-end, as improved market conditions allowed them to raise equity from private investors.

As for the non-financial sector, the adjustment is well reflected in the correction of the external imbalance, which moved from a current account deficit of 10 percent of GDP in 2010 to a surplus of two percent of GDP in 2013. The non-financial private sector moved from an elevated borrowing requirement to a lending capacity, which more than covers the general government borrowing requirements (which have also narrowed).

Journey into external markets
Households are becoming more focused on savings, despite the impact that the crisis and the austerity measures have had on disposable income. Reforms to the unemployment benefit (implying lower benefits, for shorter periods) in the context of elevated unemployment and to the pension system (lower transformation ratio between last wage and pension, in the longer run) are forcing households to increase savings for precautionary reasons. This will likely result in a stable – yet more moderate – growth of private consumption in the future, contributing to a more sustained growth model.

Non-financial corporates also reduced their borrowing requirements, as they tried to improve their financial conditions during the crisis, by restructuring and postponing some of the investment projects until demand conditions improved. An objective of this restructuring by non-financial corporates was to improve their competitiveness, in a process that had begun already in the early 2000s, when European markets opened to Eastern European and Asian products.

This largely accounts for the Portuguese companies’ capability to expand their sales to new markets as domestic demand subsided. Apart from 2009, when export volumes fell all around the world following the Lehman bankruptcy, Portuguese exports have grown every single year, always above demand, resulting in the recovery of market shares that had been lost.

This switch into external markets, partly resulting from an already ongoing adjustment process, has contributed to the desired change in the growth model, more based on external demand. Many companies were, this way, ‘forced’ into getting exposure to external markets, which they will likely wish to hold and even reinforce.

This calls for investment, in order to expand capacity, as domestic demand begins to recover, and also to improve productive processes, reinforcing competitiveness and the differentiating products in a more competitive environment.

Putting people back to work
Some indicators show that the investment cycle may be turning. On the one hand, the more recent survey on investment, by Statistics Portugal, shows that capital expenditure is forecast to grow in 2014 in nominal terms, especially in manufacturing, and more dominantly in exporting sectors. On the other hand, investment has indeed picked up at the level of machinery and other equipment, as well as in transportation equipment. Since the early 2000s, investment as a share of GDP has fallen from almost 30 percent to around 16 percent. At these levels the economy is still reducing its capital base, in net terms.

Part of this investment, still characterised by smaller scale projects, is self-financed, as access to credit – despite recent improvements – is still tighter and more expensive than before the crisis. A part of the adjustment by the non-financial corporate sector is reflected in the improvement in the ratio between gross operating surplus and gross value added, which has recovered to pre-crisis levels, but which is still low in relative terms.

But improvements in the credit markets are being seen also. Spreads are narrowing, and the survey on conditions in the credit markets do show that the banking sector is both easing standards on loans and reporting an improvement in demand. Data on new production of loans to the non-financial corporate sector show that there has also been an improvement, with a slight increase, to around €4bn per month, up from roughly €2.5bn during 2012.

This improvement in capital expenditure is also having some impact on the labour market, with the unemployment rate decreasing to 14.6 percent in April 2014, down from 17.5 percent in the same period in 2013. While factors such as emigration can play a role, between Q1 2013 and Q1 2014 there has been a decline in the number of unemployed and a similar increase in the number of employed people (around 100,000 people). Still, the unemployment rate is almost double of that pre-crisis and threefold that of the early 2000s.

The challenges ahead
Reducing the unemployment rate is one key challenge for the coming years. Even though GDP growth is forecast to accelerate to around 1.7 percent in 2016-17, unemployment is forecast to remain at double-digit levels, putting further strains on the economy (fiscal pressure, both from lost revenue and increased expenditure; and the destruction of human capital, as long-term unemployment lingers). Therefore, structural reforms remain fundamental so that Portugal can improve its growth potential and contribute to a steeper decline in unemployment (see Fig. 2). ­­

A second challenge is to ensure fiscal sustainability. While the deficit has been contained, it remains elevated, and further progresses are required to generate a primary surplus that contributes to reducing the debt-to-GDP ratio from the current inflated levels. This call for the continued reform of the general government should focus on the streamlining of services and processes, reducing bureaucracy and contributing to an easing of the tax burden, which has increased significantly during the crisis.

This challenge will be an ongoing process, as the operating reality and needs of public services change, but also because ageing will bring further increases in expenditure, in the form of pensions and healthcare. It should be noticed this is a Europe-wide trend, and Portugal is among the least affected countries, given past reforms of the pension system.

A reform of the tax system is under way, which aims to bring down the Corporate Income Tax rate from current levels (25 to 18 percent in 2018). Presently, the Personal Income Tax policy is being analysed, with reform due later this year, possibly in time to be adopted with the 2015 state budget.

A lesser appropriation of income by the general government would add resources for the private sector, so that it can continue to invest and reinforce its competitiveness, adding to the growth potential, to improved exports, and ultimately contributing to further improvements in the fiscal situation.