Trump puts NAFTA up against the wall

President Trump claims that dismantling the North American Free Trade Agreement will allow manufacturing jobs to return to the US. However,
doing so could be immeasurably destructive for US-Mexican trade 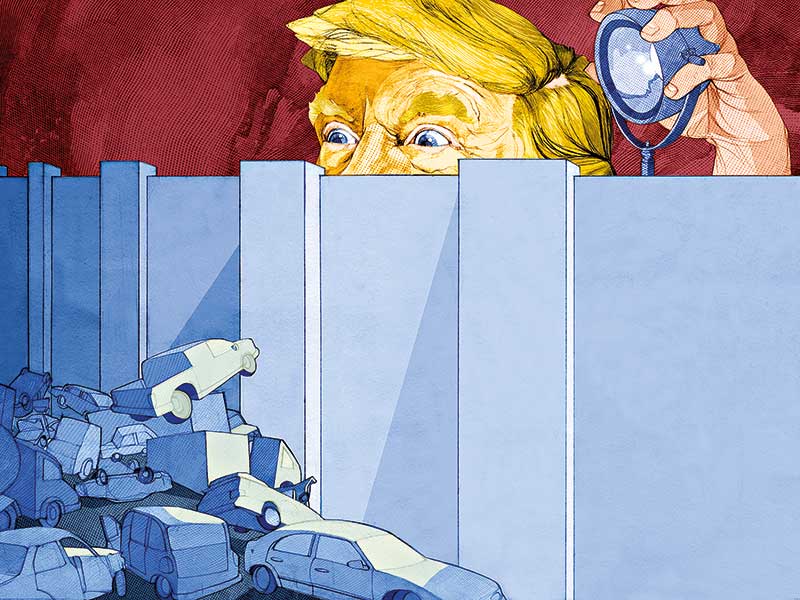 As US President Donald Trump receives bids to build his supposed “beautiful wall” along the border with Mexico, his administration is also poised to build some figurative walls with America’s southern neighbour by renegotiating the North American Free Trade Agreement (NAFTA). Before US officials move forward, they would do well to recognise some basic facts.

Trump has called NAFTA the “single worst trade deal” ever approved by the United States, claiming that it has led to “terrible losses” of manufacturing production and jobs. But none of this is supported by the evidence. Even NAFTA sceptics have concluded that its negative effects on net US manufacturing employment have been small to non-existent.

Trump may prefer not to focus on facts, but it is useful to begin with a few. Bilateral trade between the US and Mexico amounts to over $500bn per year. The US is by far Mexico’s largest trading partner in merchandise – about 80 percent of its goods exports go to the US – while Mexico is America’s third-largest trading partner, after Canada and China.

An exchange of goods
After NAFTA’s passage in 1994, trade between the US and Mexico grew rapidly. America’s merchandise trade balance with Mexico went from a small surplus to a deficit that peaked in 2007 at $74bn, and is estimated to have been around $60bn in 2016.

But even as the US trade deficit with Mexico has grown in nominal terms, it has declined relative to total US trade and as a share of US GDP (from a peak of 1.2 percent in 1986 to less than 0.2 percent in 2015).

In 2014, Mexico imported $136bn of intermediate goods from the US, and the US imported $132bn of intermediate goods from Mexico. More than two thirds of US imports from Mexico were inputs used in further processing – cost-efficient inputs that boost US production and employment, and enhance the competitiveness of US companies in global markets. Goods often move across the US-Mexico border numerous times before they are ready for final sale in Mexico, the US, or elsewhere.

Crossing the border wall
When cross-border trade flows are occurring largely within supply chains, traditional export and import statistics are misleading. The auto industry illustrates the point. Automobiles are the largest export from Mexico to the US – so large, in fact, that if trade in this sector were excluded, the US trade deficit with Mexico would disappear.

But standard trade figures attribute to Mexico the full value of a car exported to the US, even when that value includes components produced in the US and exported to Mexico. According to a recent estimate, 40 percent of the value added to the final goods that the US imports from Mexico come from the US; Mexico contributes 30 to 40 percent of that value. The remainder is provided by foreign suppliers.

When the value-added breakdown is taken into account, the US-Mexico trade balance changes drastically. According to OECD and World Trade Organisation calculations, the US value-added trade deficit with Mexico in 2009 was only about half the size of the trade deficit measured by conventional methods.

Trump claims that high tariffs on imports from Mexico would encourage US companies to keep production and jobs in the US. But such tariffs – not to mention the border adjustment tax that Congress is considering – would disrupt cross-border supply chains, reducing both US exports of intermediate products to Mexico and Mexican exports (containing sizable US value-added) to the US and other markets.

That would raise the prices of products relying on inputs from Mexico, undermining the competitiveness of the US companies. Even if supply chains were ultimately reconfigured, the US and Mexico would incur large costs – to both production and employment – during the transition period.

New links in the chain
Imports from Mexico support US jobs in three ways: by creating a market for US exports; by providing competitively priced inputs for US production; and by lowering prices of goods for US consumers, who then can spend more on other US-produced goods and services. A recent study estimates that nearly five million jobs in the US currently depend on trade with Mexico.

Given all of this, it is good news that Trump has lately toned down threats to withdraw the US from NAFTA and to impose large unilateral tariffs on Mexican imports (his position on the border adjustment tax is unclear). Instead, in a draft proposal to Congress, his trade officials are calling for flexibility within NAFTA to reinstate tariffs as temporary “safeguard” mechanisms to protect US industries from import surges.

Importing from Mexico supports US jobs in three ways: by creating a market for US exports; by providing competitively priced inputs for US production; and by lowering prices of goods
for US consumers

The Trump administration also wants to strengthen NAFTA’s rules of origin. As an illustration, current rules dictate that only 62.5 percent of a car’s content must originate within a NAFTA country to qualify for a zero tariff. That has made Mexico an attractive location for assembling Asian-produced content into final manufactured goods for sale in the US or Canada.

If the Trump administration succeeds in raising the share of content that must be produced within NAFTA to qualify for zero tariffs, both the US and Mexico could reclaim parts of the manufacturing supply chain that have been lost to foreign suppliers. Stricter rules of origin could also boost investment by these suppliers in production and employment in both Mexico and the US.

The Trump administration’s draft outline for NAFTA renegotiation also sets objectives for stronger labour and environmental standards – important priorities for Congressional Democrats who share the president’s opposition to the current agreement. Stronger standards could create benefits for all of NAFTA’s partners, but with the Trump administration actively dismantling labour and environmental protections at home, a US-led effort to strengthen them within NAFTA in any meaningful way seems farfetched. Perhaps Canada will take the lead.

Uncertainty over the fate of NAFTA has already hit the Mexican economy. It has also weakened the position of the reformist and pro-market President Enrique Peña Nieto, just over a year before the general election in Mexico. This may aid the rise of right-wing populists riding the wave of anti-Trump nationalism.

A strong, stable Mexican economy, led by a government committed to working with the US, is clearly in America’s interests. Trump would be well advised to work quickly to ensure that the NAFTA renegotiations he has demanded generate this outcome.