The US and EU are both undergoing radical shifts in their political foundations, but the differences between the two regions could not be more pronounced 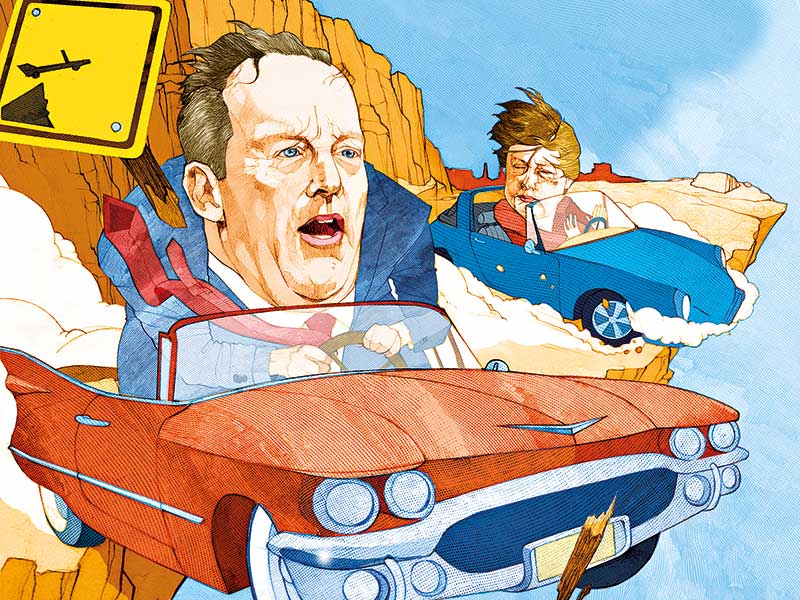 It has been almost a decade since the 2008 financial crisis, and the confrontational politics that emerged in its aftermath remain ubiquitous in the West. But despite similarities between the United States and the European Union, differences in how they address social, economic and fiscal issues have recently been thrown into sharp relief.

Since President Donald Trump’s surprise election victory, the US has seemed to be competing with the EU over which side’s politics are more contentious and dysfunctional. In each case, many potential players can subvert the political process. Trump is learning this in his confrontations with Congress, the courts and state governments. In Europe, domestic political forces routinely clash with constitutional courts and supranational bodies. And every time a national – or even regional – election is held in one of the EU’s 28 (soon 27) member states, Europeans become paralysed by fear of a disruptive outcome.

To address this state of affairs, European Commission President Jean-Claude Juncker recently issued a white paper outlining five possible paths forward: from doing nothing to pursuing systematic reforms to complete European integration once and for all. The US, too, is facing a challenge of political disunity, if not disintegration.

Cliff’s edge
The central problem for both is not just fake news or ‘alternative facts’, though misinformation does flood into most debates on both sides of the Atlantic. Rather, politics itself has become operationally dysfunctional. When citizens and politicians come to regard politics as a zero-sum game and resort to brinkmanship and other bad-faith tactics, malaise sets in.

Both European and American debates have been replete with posturing and tests of will, turning politics into a game of ‘chicken’. In chicken, two drivers race towards a cliff (or towards each other); the loser is the first driver to swerve away in the face of imminent catastrophe. But if neither driver concedes, both are destroyed.

Debating the finer points
The Trump administration behaved similarly in the lead-up to the debacle over its attempt to repeal and replace the Affordable Care Act (‘Obamacare’). The administration pressed Congress by using tactics that were almost identical to those employed by the warring parties in Europe’s debt crisis.

At first, the administration claimed that an impending conflict would not necessarily be bad, because differing opinions are inevitable – or, in the words of White House Press Secretary Sean Spicer: “Diversity makes our nation strong.” At the start of the eurozone crisis in 2010, the EU also worried about its diversity, and how to reconcile differences between north and south, or centre and periphery.

As the effort to repeal Obamacare proceeded, however, Trump refused to entertain any alternatives: the healthcare ‘debate’ was framed as a binary choice between passing a protean bill that satisfied no one and maintaining the status quo. In offering no plan B, Trump’s approach resembled that of German Chancellor Angela Merkel in the eurozone crisis, when she took a hard line that allowed for no alternatives to the German position.

Finally, there was Trump’s apparently unshakeable confidence that he would win, and that the bill to replace Obamacare would be enacted. Spicer’s claim that “we’re going to get this done” echoes Merkel’s famous mantra in defence of her policy to welcome Syrian refugees: “Wir schaffen das” (“We can do it”). But beyond these rhetorical similarities, the European policymaking approach is very different from that of the Trump administration. And it is telling that, during Europe’s long struggle since the financial crisis, it has avoided any spectacular collapses – with the exception of the United Kingdom’s Brexit referendum.

Working together
Europe’s conflicts have always been resolved with some sort of compromise. And even though critics often caricature the EU’s internal negotiating process as overly lengthy and tedious, it has undoubtedly produced positive results.

Reforms that have improved energy policy coordination or helped to create a banking union have proven to be far more robust than they may have seemed at first. European-style multilateralism depends on constantly tweaking existing arrangements, which makes it the opposite of Trump-style unilateralism.

Constitutional government, too, is based on a process of bargaining and adjusting. At the heart of the US Constitution – which was shaped by the American Founders’ experience with British imperial overreach – is a belief that many people, working through consensus, are wiser than one person. Trump will have to learn sooner or later that consensus building is inherently frustrating, and that the solutions produced by political bargaining are usually neither clear nor simple.

Europe, for its part, reached this realisation in the 1950s, when it discovered that integration would require a series of bargains to preserve large areas of national policymaking autonomy. Europe does not have an uncontested leader to impose policy preferences on everyone else. But, unlike Trump, European leaders today can realistically issue assurances such as “we can do it”, precisely because they understand that trade-offs are necessary and inevitable.

In 2017, Europe may learn two more important lessons: first, a member state’s exit from the EU need not be a destructive gambit in a game of chicken, if the country’s departure removes tension points and preserves the foundation for future bargaining. And second, Trump’s dysfunctional administration is a model of how not to govern, and voters could punish those – like French National Front leader Marine Le Pen – who continue to emulate it.