Refugee camps have to be constructed quickly when a humanitarian crisis hits. Nevertheless, they sometimes last for decades, evolving from makeshift shantytowns into full-scale urban developments 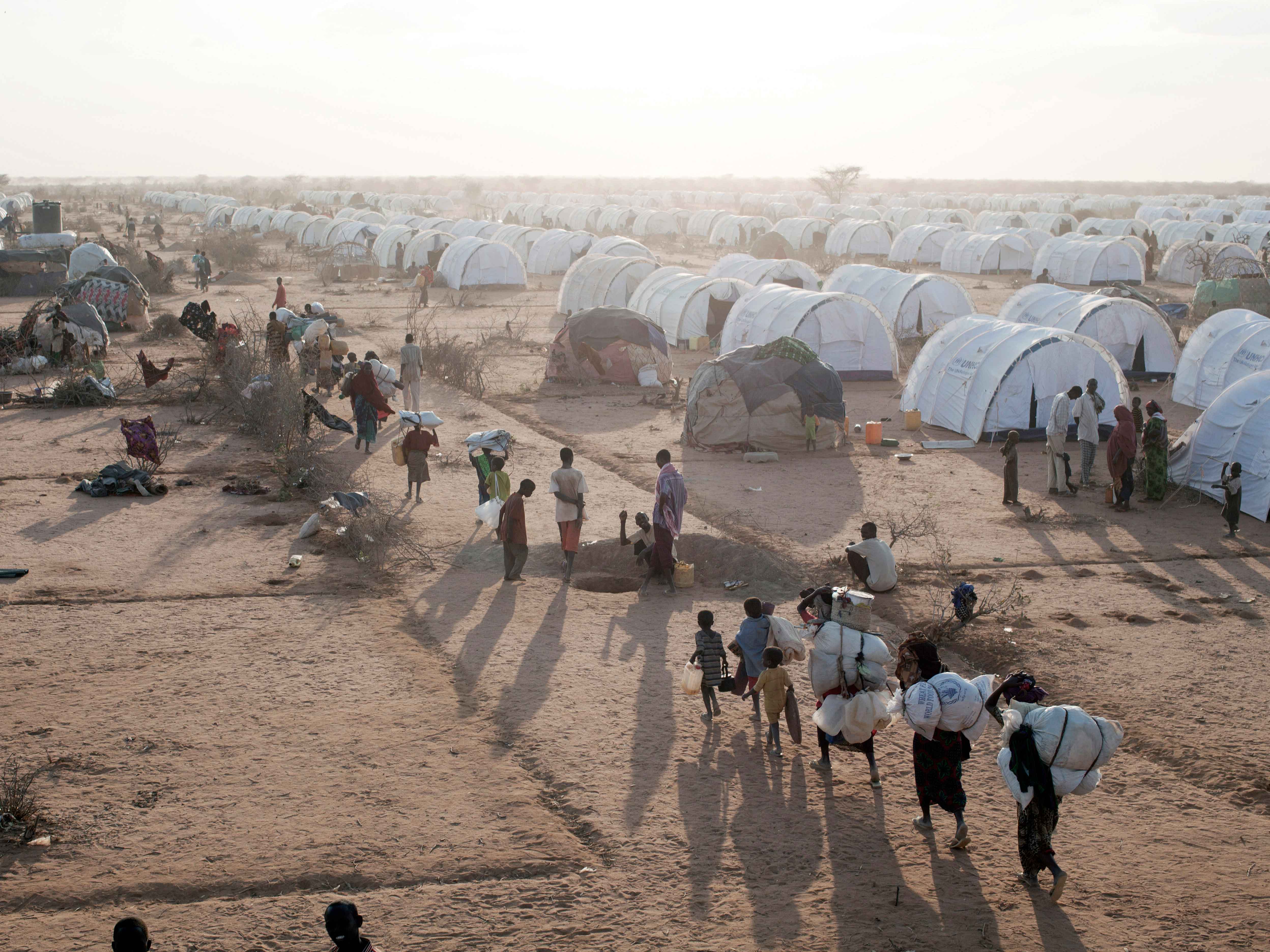 Ifo refugee camp in Dadaab, Kenya. In 2011, the entire Dadaab complex was estimated to have a population of around 500,000 people
Featured | Infrastructure
Author: Barclay Ballard

The collapse of the Somali Government displaced hundreds of thousands of people, sending them fleeing to safety across the border. Many ended up in neighbouring Kenya, at one of three newly constructed refugee camps (Dagahaley, Hagadera and Ifo) in Dadaab, towards the east of the country. That was in 1991; many have still not left (see Fig 1).

While refugee camps are intended to be temporary settlements, just how temporary they end up being is difficult to foresee. In Somalia, the ongoing civil war, combined with a series of natural disasters, has prevented many citizens from returning home. The situation has meant that a settlement originally occupied by just a few nomadic Somali farmers has become a permanent abode for more than 210,000 refugees.

Despite its huge growth, Dadaab is only the third-largest refugee camp in the world – both Bidibidi in North-West Uganda and Kutupalong in Bangladesh have since overtaken it. As camps expand and become more established, their roles also shift somewhat. More than just shelters, they become homes – whether wanted or not.

When refugees are excluded from formally contributing to the national economy, inefficiencies emerge that prevent them from achieving their potential

When camps are stuck in a state of semi-permanence, it can be difficult to develop them sufficiently to meet residents’ needs. In terms of infrastructure, many settlements lack even the most basic facilities and, particularly for longer-term refugees, transport and employment opportunities remain wanting. And with the camps left in limbo, often too are their inhabitants.

Growing pains
The expansion of some refugee camps around the world has been staggering. In 2011, the Dadaab camp was estimated to have a population of around 500,000 people. Although this number has now decreased, other refugee camps continue to grow: in Cox’s Bazar, Bangladesh, the ongoing humanitarian crisis involving the Rohingya people of Myanmar has seen the Kutupalong camp expand rapidly.

Such growth should come as no surprise. The UN High Commissioner for Refugees (UNHCR) estimates that there are 68.5 million forcibly displaced people worldwide, with 44,400 individuals having to flee their homes every day as a result of conflict or persecution. Well-established urban areas would struggle to manage this kind of population growth, let alone makeshift camps with limited infrastructure.

“Substandard shelters are one [of] the major issues in all camps,” Sami Mshasha, Director of Communications at the UN Relief and Works Agency, told World Finance. “The percentage of vulnerable refugees living in substandard shelters is growing. More than 40,000 shelters, comprising over 200,000 inhabitants, are estimated to be in need of rehabilitation. Some of these shelters have temporary roofing and damp walls lacking ventilation that constitute a health threat.”

In addition, issues relating to poor hygiene are commonplace. Kitchens, toilets and washing facilities are often substandard, and overcrowding (often without gender separation) can lead to poor health and psychosocial dysfunction. While many officially recognised refugee camps are now connected to public water supply networks, in others, like those in Palestine, this remains challenging.

“In Gaza, the availability of potable water is a key issue, which is primarily [dependent] on aquifers that are affected by seawater intrusion due to over-extraction of groundwater,” Mshasha said. “In 2016, only 3.8 percent (11 of 283 wells) supplying domestic groundwater met World Health Organisation drinking-water standards in terms of chloride and nitrate content. Waterborne diseases are common in the Gaza Strip.” That isn’t to say that the operators in charge of such camps aren’t trying their best to provide better facilities for residents. Shah Alam, Director of the Humanitarian Crisis Management Programme at BRAC, told World Finance that the infrastructure at the Kutupalong camp has had to grow quickly and provide more than just the basic necessities: “In addition to the infrastructure provided for individual refugees, it is also important to provide community facilities. Shelters are important, of course, but so too are community centres, classrooms and offices for camp officials. Each of the 34 camps – up from 30 last year – that make up the refugee complex in the Cox’s Bazar area contain the main infrastructure pertaining to food and shelter. But having dedicated areas for education and socialising are just as important.”

The logistics of building the infrastructure that refugee camps need is understandably difficult. In Bidibidi, huge areas of forest have had to be cleared and 250 miles of road constructed in order to accommodate the thousands of people arriving from war-torn South Sudan each day. And of course, this was just the start of the building process: schools, hospitals, sanitation and much more had to be set up as a matter of urgency.

The host with the most
As with more formalised settlements, the infrastructure in refugee camps provides the means to carry out daily activities. It supports personal mobility, energy supply and the transfer of information. Put simply, it is key to improving the lives of displaced people.

“With more developed camps, refugees can expect better health conditions, a more comfortable living environment and higher-quality education for their children,” Mshasha noted. “Improvements to their socioeconomic conditions and self-esteem are other likely benefits.”

As Mshasha said, camp improvements should also focus on boosting refugees’ sense of self-worth. Creating economic opportunities is a great way of achieving this, particularly by giving camp inhabitants the chance to take part in the construction of new infrastructure projects. “When we are developing new infrastructure at the camp, we try to use local people where possible and, if necessary, we provide training with outside experts,” Alam said. “Some of our refugees are now working at [a] skilled or semi-skilled level, and even those [who] are volunteers – such as those helping with the family space or learning centres – still gain new skills and knowledge.”

In fact, unlocking the economic potential of refugee camps not only promises to deliver benefits to refugees: it can boost the prospects of their host countries, too. Unfortunately, in the vast majority of cases, refugees are not permitted to find employment, forcing them to rely on charity or informal work.

This tendency to view each refugee crisis as a purely humanitarian matter, rather than an economic one, is hugely restrictive. Thankfully, the tide of opinion is shifting. In Uganda, refugees are allowed to work, and research by the Refugee Studies Centre in Oxford has shown the advantages of such an approach: in the national capital, Kampala, 21 percent of refugees run a business that employs at least one other individual. Further, 40 percent of those they employ are Ugandan citizens.

Creating the right physical framework within camps to allow for the development of entrepreneurial activity is vital. When refugees are excluded from formally contributing to the national economy, inefficiencies emerge that prevent them from achieving their potential, and the opportunity for exploitation increases. The creation of business-friendly areas within camps, therefore, should be made a priority alongside other more obvious infrastructural developments.

“The implementation of special economic zones is crucial to [ensuring] sustainable development within refugee camps,” Mshasha said. “Therefore, it is imperative that plans are put in place to include the development of market areas within camps. The plans should be innovative to create new shops or vendor stalls around open and green spaces to create opportunities to reduce the overwhelming levels of unemployment. In the camps that are near the coast, the development of the beachfront is necessary to create safe recreation and socioeconomic improvements.”

Refugee camps are often seen as an economic burden, but that doesn’t necessarily have to be the case. In the vast majority of instances, the inhabitants of these settlements simply want a safe place to live and, if given the opportunity to do so, are happy to work for it. Some are highly educated professionals with great ideas that are going unutilised due to circumstance. Putting the right infrastructure in place enables these people to feel valued once again, while providing economic value to their host country at the same time.

Building for the future
The decision to turn camps into more permanent structures is a difficult one, both politically and economically. The long-term goal of refugee settlements should be to provide a temporary haven until individuals can go back home; as time goes on, though, the prospect of returning starts to look slimmer.

In February 2019, the Kenyan Government wrote to the UNHCR announcing its plans to close the Dadaab refugee settlement within six months and asking the agency to help resettle the more than 210,000 refugees living in the camp, which had been set up more than 25 years previous. The decision has been criticised by human rights groups, but it reflects the feeling among some host countries that camps cannot be allowed to exist indefinitely.

The reality is that the average refugee will remain in exile from their home for 10.3 years, according to the World Bank. Whether this is spent in the same camp or not, they cannot be expected to endure makeshift lives for longer than necessary. But even when states want to provide better facilities for those they are hosting, finding the means to do so is not always easy. “The resource requirements are huge and agencies need to improve camps within a limited number of years,” Mshasha said. “I think the only practical approach is to acquire outside help. We need support from national governments, private enterprises and others.”

Outside investment is something that has been mooted with regard to Bangladesh’s refugee camps, particularly from neighbouring states. Projects connected to China’s Belt and Road Initiative could also be ramped up, especially in relation to helping the communities most affected by the Rohingya crisis – for example, the $15bn Payra deep-sea port, which is due for completion in 2023, could look to support communities in Cox’s Bazar through new employment opportunities. Similarly, India’s investment proposals would be well served in underdeveloped areas of Bangladesh. European partners should not neglect their responsibilities, either: as Bangladesh’s biggest export destination after the US, Germany could back up the recently announced private sector investment by Siemens with a commitment to fund transportation and accommodation for workers based near refugee settlements.

Money will not be all that is required to better develop refugee camps – a fair deal of expertise will be required too, particularly as many settlements are located in geographically challenging areas. With little time to spare, urban planners will have to work quickly, but also carefully, to ensure that camps are built up in a way that considers both social and economic factors. If they can achieve this, then refugees all over the world will gain access to a better quality of life, and host countries will gain new urban areas that can remain long-term economic assets, even when their inhabitants are finally allowed to return home.