Sold down the river: how Paraguay’s infrastructure gap is hurting the country’s poorest citizens

Every year, Paraguay’s capital, Asunción, struggles to cope as many of its inhabitants are displaced by flooding. Greater infrastructural investment could help alleviate the issue 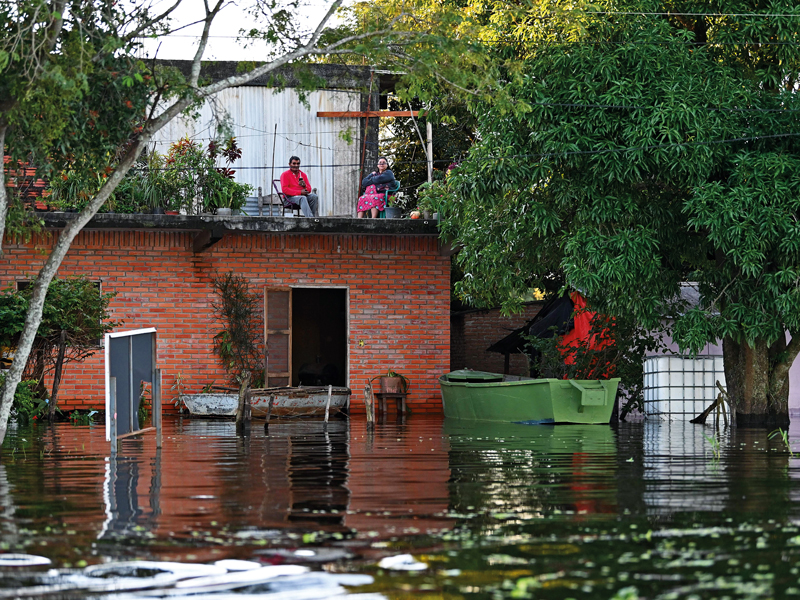 The benefits of Paraguay’s economic boom have not always been shared evenly. In Asunción, this inequality comes to a head every time the rains arrive
Featured | Infrastructure
Author: Barclay Ballard

Looking at the statistics, things are going well for Paraguay. Between 2004 and 2017, the economy posted an average growth rate of 4.5 percent, outpacing most of its regional competitors. In that period, total poverty fell by 49 percent and extreme poverty by 65. Although economic expansion is predicted to fall below four percent for 2019, sovereign debt is low. On the streets of the country’s capital, Asunción, however, optimism is in short supply.

The benefits of Paraguay’s economic boom have not always been shared evenly. In Asunción, this inequality comes to a head every time the rains arrive. Paraguay is no stranger to flooding but, earlier this year, two weeks of particularly heavy downpour caused the Paraguay River, which passes straight through the capital city, to burst its banks. A 90-day emergency was quickly declared, with many families – especially those living in less affluent neighbourhoods – forced to flee their homes.

A freak weather event is difficult to plan for; persistent heavy rainfall less so. Yet, each year Asunción fills with makeshift shacks providing temporary housing to those displaced from elsewhere in the city or other towns situated along the river. The proceeds of Paraguay’s economic growth, which look so good on paper, are much needed here.

When the floodwaters arrive, the inequality that normally remains hidden from government officials and corporate high-flyers is thrown into the light

Building bridges
It would be disingenuous to claim that Asunción has not benefitted from Paraguay’s economic growth at all. Private investment is rising, real estate prices are on the up and new construction projects regularly appear. Costanera de Asunción, a promenade running alongside the Paraguay River, opened in 2012 and the World Trade Centre Asunción followed three years later.

Nevertheless, in many areas, the city remains underdeveloped. For example, although its wider metropolitan area is home to almost a third of the country’s seven million people, Asunción does not possess a metro service. As a result, many of the city’s working population – those who cannot afford to live in its central district, at least – have to take to the roads for their commute. An estimated 600,000 vehicles carrying 1.5 million people do this trip every day. Twice.

As was demonstrated earlier this year, the city is also poorly equipped to deal with the heavy rainfall that regularly occurs between October and May. This is not a new problem. A 2012 World Bank report read: “Rapid unplanned urban population growth in metropolitan Asunción over the past 40 years has resulted in a substantial increase of informal occupation of public spaces, flood plains and environmentally sensitive areas, bringing with it the associated negative impacts to the environment that result from the lack of adequate stormwater drainage systems and solid waste collection and disposal, as well as water supply and sanitation infrastructure or services.”

Fortunately, work is underway to build the water treatment infrastructure the city so badly needs. Acciona, a Spanish infrastructure and renewable energy firm, has started constructing the Bella Vista wastewater plant in order to decontaminate Asunción Bay, with two other plants in the pipeline. It’s a start, but not much more than that. According to the Financial Times, some utilities experts estimate that Paraguay’s capital city needs to spend $1bn to improve its sewage and drainage infrastructure.

Holding back the flood
The role that infrastructure can play in reducing inequality is often overlooked. Better transport services provide easier access to higher-paid jobs, smoothing out kinks in the labour market. The same is true of improvements to communication infrastructure. Sumedha Bajar, a faculty member at the National Institute of Advanced Studies, wrote in a report published last year: “It may be that through increasing access to productive opportunities, through reducing production and transaction costs (and thereby leading to industrial or agro-industrial development), and by helping increase the value of assets of the poor, infrastructure can help reduce inequality. Additionally, by providing easier geographic access through improved transport infrastructure, labour mobility is enhanced, which can drive surplus labour to move to places where labour is in short supply.”

In Paraguay, these opportunities are much needed. No country has higher land inequality, with over 70 percent of all productive land in use by just one percent of farms. The poorest members of the population rarely have access to health insurance, and 23 percent of the population remains at risk of “catastrophic out-of-pocket expenditure”, according to the World Bank’s 2018 Systematic Country Diagnosis report on Paraguay.

When the floodwaters arrive, the inequality that normally remains hidden from government officials and corporate high-flyers working in shiny new office blocks is thrown into the light. Residents of slums like Ricardo Brugada, more commonly known as La Chacarita, are forced to make temporary accommodation elsewhere on higher ground. Local councillors insist that more permanent accommodation is available for the displaced some 20km to the east of the city centre, but given the poor transportation options available, many are unwilling to move from their riverside homes.

Better infrastructure around the country would also help lessen the pressure on Asunción and the Paraguay River. Around 45 percent of the population lives in rural areas, where poverty remains high. Currently, they have few ways to improve their lot other than by moving to the capital and joining the thousands already making the long trip to their jobs in the city centre every day.

The bigger picture
Countless reports have urged local and national politicians to improve Asunción’s infrastructure. Global Infrastructure Hub estimates that the country has a $12bn investment deficit regarding energy infrastructure, a $1.4bn gap in terms of rail transportation and a $1bn shortfall concerning telecommunications. The challenge lies not so much in identifying where more money needs to be spent, but in getting the money in the first place.

The country’s tax takings are low, which means social spending is too. Until 2013, in fact, there was no income tax at all. The current tax system is extremely regressive, with nearly 60 percent of all tax revenue stemming from indirect sources like VAT and excise tax. Overall, the OECD calculated the ratio of tax revenue to GDP to be just 13.8 percent in 2017, lower than all other South American countries.

Trust among Paraguayans in their local or national politicians is also low. There is a widespread perception that the lower a person’s income, the less their voice is heard. Research undertaken by Latinobarómetro found that 87 percent of respondents in the country believe politicians govern for the benefit of the powerful, one of the highest results in Latin America (see Fig 1). Even if that is the case, it is never easy to convince a country that has enjoyed low taxes for so long that rates need to be increased; new president Mario Abdo Benítez is trying nonetheless. A bill that would reform the country’s tax system and result in a 10 percent increase in revenue collection – worth $300m a year – is now being discussed.

Local politics is also trying to improve the situation for Asunción residents. The city’s mayor, Mario Ferreiro, wants to improve riverbank defences and construct more flood-proof homes, but his plans have been held up by the municipal board. Although Ferreiro’s proposals would eat into already stretched budgets, allowing the current situation to continue makes little sense. Estimates indicate that the annual cost of rehousing the thousands in the city that are displaced by flooding stands at $20m.

For too long, improving the city’s neglected infrastructure simply didn’t feature very high on the government’s list of priorities. That may finally be about to change: there are plans to invest over $2bn in Paraguay’s north-western Chaco region in an effort to transform the semi-arid area into a hub for agricultural trade. While those living in slums along the Paraguay River may resent such expenditure, they too could stand to benefit if it provides much-needed job opportunities outside the capital.

Other infrastructural projects that will benefit the city directly, including the Asunción-Chaco Bridge, appear to be closer to fruition. They are part of a $2bn portfolio of developments that is set to benefit the capital and its surrounding area. If these projects are completed, they will provide much-needed relief to the citizens who have been denied their share of the spoils from Paraguay’s decade of economic growth. In the years to come, perhaps Asunción’s poorest may be able to finally enjoy the city’s prosperity. It’s just a shame it’s taken so long.